JnJ COVID-19 vaccine interim readout: 57% - 72% efficacy, depending on… SOMETHING

Today Johnson & Johnson/Janssen announced the interim readout (not final numbers!) of their adenovirus-vector based COVID-19 vaccine: 72% efficacy in the US, down to 57% efficacy in South Africa. We previously described the Pfizer/BioNTech and Moderna/Lonza vaccines as “beautiful”; this is “relatively pretty”. Pretty enough to do some good in the world, though.

Indeed, a cursory search of the JnJ web site didn’t turn it up either, when you’d think that would be the only thing on the front page. (Perhaps it will turn up later? Yes: see below.) So we’re pretty frustrated here, reporting not only on a press release instead of actual scientific data (let alone peer review), but also reporting on hearsay! 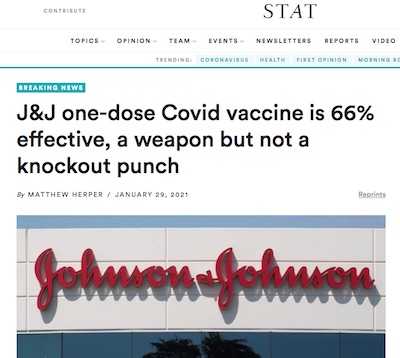 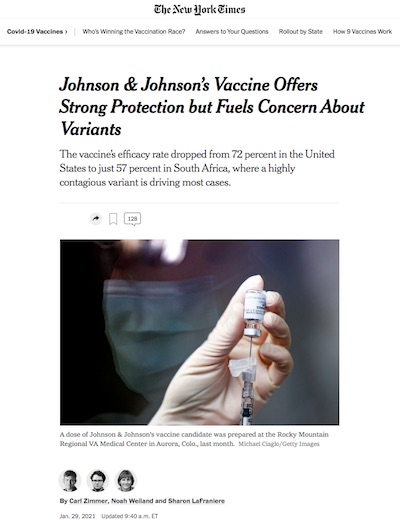 Stunningly, JnJ are apparently willing to release important information like this orally, without having already written up the report. Let’s just say our confidence is not high: normally, this sort of crap would earn a snub from us.

But… gritted teeth. At least it’s not as bad as AstraZeneca/Oxford was. When they file for an EUA with the FDA (probably in February), we’ll have to take a close look at their filing docs. It does smack of upper management who are clueless about how science works, though.

Still… here at Chez Weekend we read & summarize the silly, not-yet-scientific reports so you don’t have to. Our sources for today are an article by Matthew Herper in the quite reliable STAT News [1], a New York Times article by the formidable Carl Zimmer and colleagues [2], and just to show we don’t completely ignore the mainstream media, a CNBC article by Berkeley Lovelace Jr. [3]

This is a viral vector vaccine: they take an existing virus and engineer it so that it can’t reproduce, and give it the gene for the SARS-CoV-2 spike protein. That means the virus can infect 1 cell, 1 time, no more. The victim cell then starts cranking out a few viral proteins, though not enough to assemble a complete virus (neither vector nor SARS-CoV-2). The spike protein gets displayed on the cell surface, and the immune system goes happily nuts forming defenses.

The viral vector here is Ad26, a somewhat ordinary adenovirus rather like a common cold virus. That’s nice, in that the vector virus even if it were to (somehow) get out of hand, would at worst give you a cold. On the other hand, if you’re already immune to Ad26, your immune system might make you also resistant to the vaccine. It also complicates the case for giving a second “booster” dose, about which more later.

No viral vector vaccine has ever been approved in the US up to now. But one has been approved in Europe last July: JnJ’s vaccine against Ebola. Given how utterly nasty a hemorrhagic fever Ebola is, that’s a good thing. The Ebola vaccine also uses Ad26 as its vector virus, so we have considerable safety data on the use of Ad26 as a vaccine vector. That should inspire some confidence!

Also, the Russian Sputnik V vaccine (also known as Гам-КОВИД-Вак) against COVID is an adenovirus vaccine (using both Ad5 and Ad26, for reasons I haven’t dug into). Due to the relatively non-transparent Russian approval process, though, this does not especially inspire confidence.

This was not a small-time trial; JnJ really put some muscle behind it:

So that part looks pretty good! Ok, not perfect. But pretty good, for real-life trials.

This is a single-dose vaccine (but see below!), so efficacy was measured 28 days after the first dose:

The differences in efficacy are worrisome. Even more worrying, though typical of the scientific bungling in press releases, not enough information was disclosed to tell if the differences were statistically significant. However, they did report that in South Africa they believe (but didn’t specify if they had done the sequencing to tell) that the cases were 95% driven by the B.1.351 variant. That’s the super-contagious variant in South Africa, worse than the UK variant B.1.1.7. So the South African efficacy decrease may be explained by that; we just can’t tell from the reports of the oral press release. But… it looks like it’s not so good against the B.1.351 variant.

Somewhat more hearteningly: overall the vaccine had 85% efficacy against severe COVID-19, and 100% efficacy against COVID-related hospitalizations. This is crucial: it shows the JnJ vaccine, though not as good as the others, nonetheless is also effective at taking the back-breaking load off hospitals. (Though, working from vague reports of a press release, we don’t have enough information to compute confidence intervals yet on these efficacies.)

Also, 2 important metrics for comparison are well worth keeping in mind:

So while we’re all a bit dazzled by the 95% efficacy of Pfizer and Moderna, by these objective standards the JnJ vaccine might be pretty good. (“Might”: once they stop yakking at press releases and show actual hard data in the scientific literature or in FDA submissions!)

The really good news for the JnJ vaccine is the relaxed cold chain requirements. Here are the stability times at various temperatures for the 3 vaccines, as near as I can make out:

So JnJ is stable for longer times and at higher temperatures more accessible to smaller institutions. (Pfizer’s stringent requirements limit it to big cities with large teaching hospitals, research facilities, pharma laboratories, and universities. Moderna, while somewhat less demanding, is still pretty demanding of cold chain requirements.) A relaxed cold chain is especially important for shipping to more remote areas around the world, as well as rural areas in the US, to help stamp out mutations.

JnJ is also doing 2-dose trial, just like Pfizer and Moderna, to see if giving a second dose boosts the efficacy, as it does for mRNA vaccines and many others. This trial is 30k pts, given 2 doses 57 days apart. The readout is expected summer or fall, depending on case rates.

(The Weekend Editrix just got her first dose of the shingles vaccine Shingrix yesterday, and consequently feels achy today, but looks forward to the second dose. Two-dose vaccines are a fine thing, and work admirably when administered properly.)

As Tony Fauci said to the NYT:

“If they get a prime boost, it’s entirely conceivable that they can get up to 90-plus percent.”

That would be an excellent outcome, to have a 3rd vaccine with > 90% efficacy, even if that required a second dose.

Only about 7mln doses are available quickly, and about 30mln by April, so it may not matter in a practical sense world-wide. Manufacturing has to gear up in Baltimore, later in 2021 (or very early 2022, at a guess?). They’ve promised 100mln by end of June; I don’t see how that can happen, but then they know their capacity better than anybody else, so this gets a tenative pass from me.

Gratifyingly, the Republican clown car has not rolled up on this news and disgorged… well… anything, really. Perhaps the adults really are back in charge again! Or so one may hope.

Overall, it’s disappoinging that this vaccine is not at the 95% level we’ve seen before. But, it’s better than flu vaccines that we already know are a good & useful thing and it’s above the 50% efficacy threshold the FDA set to stop community spread.

So… not a “knockout punch” in the words of Herper at STAT News, but still pretty good and useful.

The formidable Derek Lowe weighed in [4] at his blog, In the Pipeline hosted by Science Translational Medicine. He reached much the same conclusion as we did here:

He also has a few things to say about the upcoming Novavax vaccine. I didn’t say anything about it because the public data is rather thin on the ground, even less than the J&J press release. But that will be remedied soon.

Derek’s stuff is worth reading. And, in a break from Internet tradition, the comments are usually pretty good too, if you like science nerd-talk (and since you’re reading this blog, you know you do like it even if it’s a secret guilty pleasure). The commenters pointed out, for example, that the high HIV+ rate in South Africa meant they could check efficacy of the vaccine in immune-compromised people (and it was as ineffective as you might imagine: 49% for HIV+, 60% for HIV-).

I finally found the actual press release, so that’s worth looking over. [5] Still itching to see the actual scientific report, though. Or the FDA submission documents.