A beautiful vaccine: a look into the Pfizer/BioNTech FDA EUA submission package

Ok, nobody asked me this time, because for once I got out ahead of them. It seems Pfizer/BioNTech submitted an EUA (“emergency use authorization”) package to the FDA. What’s it look like? 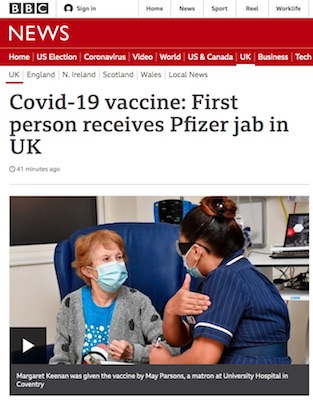 First, we have to note with great satisfaction that Pfizer/BioNTech submitted an EUA to the regulatory authorities in the UK, who have granted it. Vaccinations began today, starting with a 91-year-old grandmother. [1]

She was described as “a former jewelry shop assistant” (though, to their credit, not by the venerable Beeb, cited below). This bugs me: surely her career is not relevant data here? Why must we be so reductionist about people’s jobs, rather than the fact that they are people? We are better than economic “cannon fodder”! [2]

Still, cannon fodder or no… she’s vaccinated now. (Or will be, upon her second dose 21 days from now and another 7 days to build up final immunity.)

Pfizer/BioNTech FDA submission for EUA in the US

With that out of the way, we note also with great satisfaction that Pfizer/BioNTech have sumbitted their EUA application to the FDA. The advisory committee meets this Thursday 2020-Dec-10 (Moderna’s is on next Thursday 2020-Dec-17), and will make a recommendation to the FDA, which will then decide. There is of course a process for this, but I don’t know what it is: this has never been done before. That’s the nature of emergencies: bad situations that create one surprise after another.

Still, I have every hope the process will work, at least 2 vaccines (Pfizer/BioNTech and Moderna) will get US approval before the end of 2020, and vaccinations will likely start next week with health care workers. (A member of the Weekend family who is an active health care worker has already received the letter saying when & where to show up to get whichever vaccine makes it there first.)

A pleasant side-effect of an FDA submission is that lots of data suddenly become public. Cases in point today are:

An FDA reanalysis of data submitted with a drug application is quite normal. Indeed, when your humble Weekend Editor was first starting out in pharma research, a more senior scientist explained to me that the first thing the FDA does is throw out your conclusion, the second is they reanalyze your data, and the third thing is they compare their conclusions with yours. If there’s a match, then you get a committee hearing; if not, you get a frown at various levels of intensity, depending on how bad the screw-up is and how fast you correct or withdraw the application.

So the submission happened, then the reanalysis happened, and now we’re at the stage of a hearing before the external advisory committee. These committees are smart: they’re usually academics and medical practitioners who are at the peaks of their fields, and experts in the disease under study and its therapies. I’ve seen some of them, and while there is argument back and forth (somebody always doesn’t quite get it), they almost invariably come to very reasonable conclusions that balance efficacy and safety. Almost always. 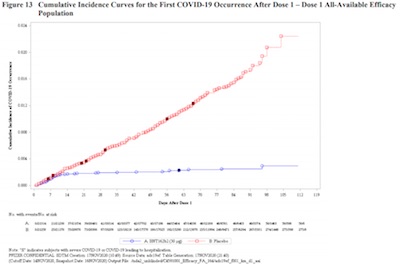 Obviously, there’s a lot of stuff in there, rehearsing the trial results in excruciating detail. I’ve personally only excruciated a tiny bit of it, but I want to call attention to this beautiful plot (p. 58 of the Pfizer/BioNTech submission, p. 30 of the FDA reanalysis):

Note that the red arm rises more or less linearly in time. That means there is a constant probability/unit time, or rate, of being infected. This is the background case rate we would like to escape.

The blue arm, though: it shows more or less no protection up until about day 12, but then goes almost absolutely flat. It completely squashes the case rate to almost nothing. Yes, there are a couple cases; but remember there are about 15,000 people in each arm, so the probability/time, or rate, of getting infected is driven down to almost nothing beyond a few rare events.

This is the first news that has made me hopeful in a long while. (2020 has been hard on all of us, world-wide. If you’re in the US, the politics has … not helped the situation, to put it mildly.) If it’s approved – and it damn well better be! – then we can look forward to being vaccinated soon. First health care workers and nursing home residents, then essential workers and the elderly, then everybody. And I hope it’s everybody, anti-vaxxers included. (Hello, Jacobson v. Massachusetts?)

NB: Pediatric and pregnant trials are still ongoing, with readouts sometime early in 2021.

Meanwhile, back in the Republican clown car 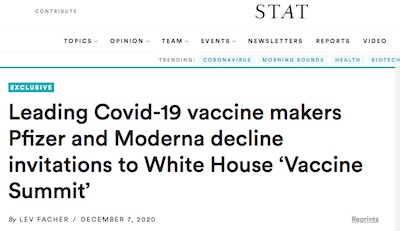 Ironically on the same day, STAT News reports [5] that Trump invited both Pfizer and Moderna to the White House for a “Vaccine Summit”. Since everything Trump touches dies, one should be very dubious about this invitation, as it will likely be a stunt for Trump to claim personal credit. (As Trump said on Sunday, in a Fox News phone interview: “I came up with vaccines that people didn’t think we’d have for five years.” Like he did it personally?! No, I will not link to Fox News. You can watch Republican propaganda on your own time. But… you shouldn’t.) Notably, Pfizer refused to take government money for this, so Trump’s claim of credit is… peculiar, with emphasis on the “liar” part of it.

Both companies wisely declined to be used thusly.

In a hair-tearingly frustrating sideshow, Senate Republicans are not to be outdone: they’re actively undermining public confidence in vaccines by holding hearings starring an prominent anti-vaxxer quack. [6]

That would be one Dr. Jane M. Orient, executive director of the Association of American Physicians and Surgeons. As Charlie Pierce delicately describes them:

Before you get too impressed by the Association of American Physicians and Surgeons, you should know that it’s pretty much a wingnut-welfare hiring hall for people who think the AMA is run by a cabal of Trotskyite neurosurgeons.

Some of their positions, according to Olga Khazan writing in The Atlantic [7], are just utter, complete howlers:

Now, with positions like that, why do they still even hold medical licenses, let alone testify before the Senate against vaccines in the midst of a pandemic? And why do half of us encourage so many Republican politicians who enable this sort of crap?

Why does the frail gleam of a ray of good news have to be accompanied by right-wing self-destructive idiocy?

Derek Lowe, over at In the Pipeline, has added his own analysis of these 2 reports (and highlighted the same plot). [9] He notes that nearly all the cases observed in the treatment arm happend in the first 12 days, before the vaccine could raise an immune respones. Almost nothing after that. That means the efficacy after the second dose is even higher.

Remember, though, what an EUA is for. That word “emergency” is there for a reason: this authorization is for something extremely serious for which there is no available alternative. That’s exactly the situation we find ourselves in, on both counts, and I think that the risk/benefit ratio is clearly, overwhelmingly in favor. Let’s do it.

2: Eugene V. Debs, “Canton, Ohio anti-war speech”, 1918-Jun-16: “You need at this time especially to know that you are fit for something better than slavery and cannon fodder. You need to know that you were not created to work and produce and impoverish yourself to enrich an idle exploiter. You need to know that you have a mind to improve, a soul to develop, and a [humanity] to sustain.”. Eugene V. Debs, was an American socialist leader in early 20th century. NB: Debs was convicted, imprisoned, and disenfranchised for this speech against World War I, delivered on June 16, 1918.↩

7: O Khazan, “The Opposite of Socialized Medicine: A small, litigious group has spent decades trying to stop the government from telling doctors what to do. What happens if it succeeds?”, The Atlantic, 2020-Feb-25. ↩

8: Did you notice at the top each page where it says this is the blog of a grumpy old retired scientist? Believe it or not, I’m exercising self-restraint here. ↩