Somebody asked me about the early readout this week of the AstraZeneca/Oxford vaccine Phase 3 trial. Initially they said 70% efficacy. It’s not a stunningly good 95% result like Pfizer or Moderna; still, it’s a good, craftsmanlike bit of work. But then… things got weird.

Yet another round of science by press release – here at Chez Weekend we understand the tight schedule constraints & are prepared to be reasonably sympathetic. But we are getting a bit testy at having to comb through the vague, blurred, and ambiguous pronouncements of managers, lawyers, and PR people instead of scientific evidence. In the recent cases of Pfizer and Moderna, this seems to have worked out mostly ok.

But not this time. 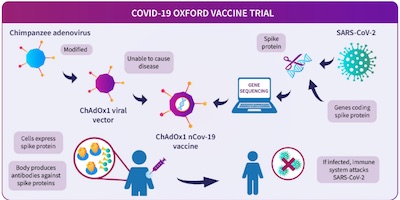 Recall that the AZ/OX vaccine is much more complex. It uses a viral vector: they take an existing virus capable of infecting humans, scoop out its genetic material using a mind-bendingly complex and careful process, then give it the genetic material of only the SARS-COV-2 virus spike protein. This little chimeric monster is capable of infecting exactly 1 cell, 1 time, using the protein envelope of the vector virus. That causes the SARS-COV-2 spike protein to be made in some quantity in the infected cell. Your immune system, theoretically, then reacts to the spike protein and produces immunity.

The point of the viral vector is to have a protein envelope which (a) preserves the mRNA in your blood long enough to do something, since bare mRNA is quickly degraded, and (b) gain entry to 1 cell per virus. Pfizer, Moderna, and even Sanofi have a lipid nanocapsule technology that does this without having to use an existing vector virus.

But… if you use an existing human virus, some of your population will already be immune to it (like cold viruses: old people have had a lot of colds). So they used a simian adenovirus, ChAdOx1 (basically monkey colds). Unless you live in close proximity to chimps and somehow exchange nasal fluids with them, you probably aren’t immune to this one. [1]

There are a few other differences, like changing an amino acid to stabilize the spike protein and replacing thei viral leader sequence with human TPA. These appear to be engineering concessions to pragmatism, and look pretty reasonable.

But the simian adenovirus will, sort of, infect human cells. So… maybe it’ll work? 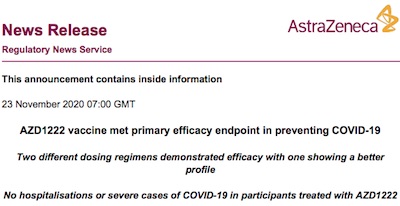 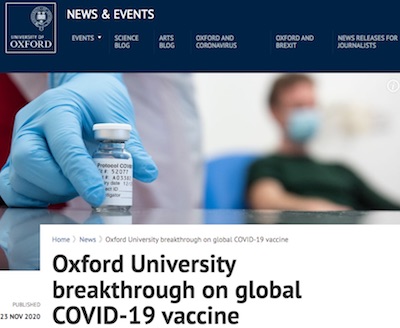 First up is the press release from AstraZeneca, and the Oxford version. [2] [3] They claim 70% efficacy, which is actually pretty good, albeit not quite like the 95% efficacies seen by Pfizer & Moderna. But… there were 2 dosing regimens (and controls):

One nice thing is that people in the control arm didn’t just get an injection of saline, they got a meningococcal vaccine MenACWY on the first dose, and saline on the second. Assuming they haven’t had MenACWY (or a meningococcus infection), they’ll have some reaction to the first dose and thus won’t know they’re in the control arm. Good for AstraZeneca! (But… apparently the subjects at the Brazilian sites got saline?!)

But (again)… the smell of the rest of the press release immediately raises questions:

That sobbing sound you hear in the background is statisticians all over the world, gently weeping.

Why does the lower dose get higher efficacy? 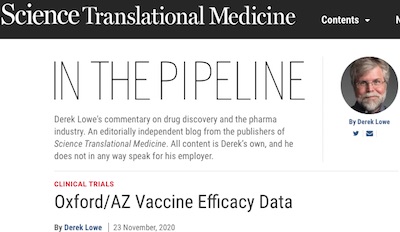 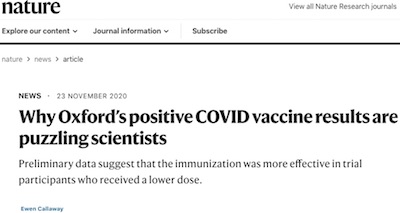 Our next 2 stops are Derek Lowe’s blog In the Pipeline at Science Translational Medicine [5], and a news article at Nature by Ewen Callaway.[6] Both posit similar mechanisms to explain why the lower dose had the higher efficacy:

In some ways, this is satisfyingly perverse: biology is just maddening in the way that everything interacts with everything else, all the time. This is the sort of roadblock you’d expect… but why didn’t the Phase 1/2 dose finding trials find this?

Now the story takes a slightly darker turn, for 2 reasons:

However, the data are now pretty weird. Kirka’s article [10] quotes David Salisbury, an associate fellow of the global health program at Chatham House:

“You’ve taken two studies for which different doses were used and come up with a composite that doesn’t represent either of the doses,” he said of the figure. “I think many people are having trouble with that.”

There are 2 bottom lines that I see here:

This is the problem with science by press release: the PR is always wordsmithed by PR people, managers, and lawyers to give it “good spin”, sometimes (I hope inadvertently) at the expense of truth. I’d be much more understanding if the initial PR had said, “Hey, we kind screwed up a few things, but the underlying efficacies are still pretty good some of the time.” But they chose instead to tell just part of the truth.

Both Pfizer/BioNTech and Moderna/Lonza were pretty convincing. AZ/OX… not so much. As of yesterday, the AstraZeneca CEO is admitting they might have to do another Phase 3 clinical trial to clean up the mess. [11]

A little birdie whispered in my ear that, based on the Lancet publication of the Phase 2/3 COV002 (UK) trial, AZ/OX had the doses for their trial sites manufactured by 2 different CMOs.

A Contract Manufacturing Organization (CMO) will make small to medium-sized batches of medications for you, to your specifications, under GMP guidelines. (GMP means Good Manufacturing Practice, i.e., survivable under FDA auditors.) This makes sense if you don’t have your large-scale manufacturing line up and going yet. In exchange for only somewhat disturbingly large piles of money, you can get enough to run your trial now, rather than later. Thus in the case of a pandemic, being early to market means fewer people die. In more pedestrian cases, it means earlier market entry, with all the revenue and first-mover advantage implied.

It’s a defensible thing for AZ/OX to have done.

But… COBRA Biologics supplied the drug for the 18-55 year old cohort, and Advent supplied the doses for all the rest. COBRA apparently messed up and made the first batch at half strength.

That explains the source of the half-dose blunder. It does not explain other blunders:

So it’s a bit more understandable… but no prettier. The AZ/OX vaccine probably works… but we won’t know until there’s another trial.

1: And if you do regularly exchange nasal fluids with monkeys, I don’t want to hear about it. Go make your own Monkey Snot Blog, not here. ↩

4: The method used must involve Cox regression/Kaplan-Meier curves, for which the data was not released. Naïve combination methods don’t match the result:

8: L Burger & K Kelland, “Dosing error turns into lucky punch for AstraZeneca and Oxford”, Reuters, 2020-Nov-23. NB: They can still call it “lucky”, since the different age caps were not revealed until the next day, and the efficacy difference could still be called “serendipity”. ↩

11: S Ring & J Paton, “Astra Eyes Extra Global Vaccine Trial as Questions Mount”, Bloomberg, 2020-Nov-26. NB: It appears the AZ CEO still insists the manufacturing/delivery error was “not a mistake” because they amended the trial protocol to accomodate it. A rigid insistence on being always right does not inspire confidence, at least not from me. ↩