Yesterday was also a good day: the FDA’s external advisory committee passed the Moderna COVID-19 vaccine at 5:20pm EST on 2020-Dec-17. Late today, the FDA agreed and granted the Emergency Use Authorization. 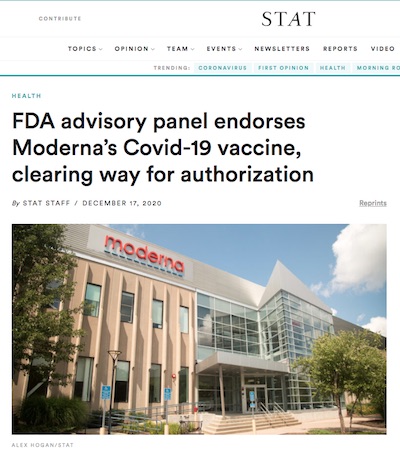 Our first stop in these matters is with STAT News to get a summary of the situation. In this case, they published a transcript of their live-blogging of the hearings before the VRBPAC (Vaccines and Related Biological Products Committee). [1]

This is the same body as the one that recommended approval for the Pfizer vaccine, though I note that here there are 21 members here vs 22 for Pfizer. A Venn diagram of the committee members present might be interesting. But the bottom line is: the vote was 20-0-1, i.e., 20 in favor of the EUA, nobody against, and 1 abstention.

In every crowd, there’s always gotta be one, right? In this case, it was Michael Kurilla, director of clinical innovation at National Center for Advancing Translational Sciences in the NIH. He felt that EUA was a bit too much, and would have preferred what’s called the “expanded access protocol”: basically open the clinical trial to people at high risk (presumably the treatment arm, not the placebo?). This would be sort of a half-step toward EUA, to minimize risk in people who don’t already have a high risk profile for COVID-19, a very cautious position. I wonder if he was also on the Pfizer committee, and if so why he did not advocate this position there? Still, he’s not against the Moderna vaccine, just very, very cautious. So, it’s not an unreasonable position, really.

Interestingly, one of the committee members who voted against the Pfizer vaccine last week, voted for the Moderna vaccine this week: A. Oveta Fuller (UMich microbiologist) said she was impressed by Moderna’s transparency, and that there was no attempt to extend the age range downward to 16-17 year olds, as with Pfizer.

The question from the FDA before the committee was:

This committee approval is not the final step; the committee’s report is a recommendation to the FDA, not a binding decision. There are times in the past when the FDA has chosen to disregard the opinion of external scientists & medical pracitioners, but it’s pretty rare. It’s highly likely that the FDA will issue very soon a formal EUA for the Moderna COVID-19 vaccine. [2]

It may take a day or two, barring political meddling, for the FDA to grant the official EUA, but it’s pretty likely to happen.

Steven Goodman, associate dean of clinical and translational research at Stanford, suggested last week for Pfizer and again this week for Moderna that an EUA would be an ethical challenge for those still on the trial, especially in the placebo arm. he proposed the trials continue in double-blinded fashion, but that the patients be called in for a second treatment. Without the administering clinician’s knowing what the second treatment was to be:

This would permit the trial to keep collecting double-blind data, but at the cost of considerable complexity and money.

Both Pfizer and Moderna rejected this, planning to unblind the trial and tell the participants which arm they were in, as it would be too expensive to carry out Goodman’s suggestion, but unethical to keep the placebo arm participants in the dark. They want to vaccinate the subjects in the placebo arm. The details are, alas, somewhat unclear and probably differ between Moderna & PFizer.

It would have been nice if there had been adequate planning on the Federal level, to have a common policy on unblinding, rather than haphazardly by company. Nevertheless, here we are.

Some of the data presented showed the Moderna vaccine was more reactogenic (showing strong immune response, which is desirable, but also showing side effects like fever and soreness in the very short term). Indeed, 16% of patients in the treatment arm showed Grade 3 side effects (really annoying, likely to put you in bed, but not in the hospital).

In particular, there were a couple cases of Bell’s palsy, which is a temporary and partial paralysis of facial muscles. [3] It’s not super-serious, though annoying to those who get it. And it does not appear to be statistically significantly related to the vaccine.

Also, some committee members noted anaphylaxis (allergic reaction leading sometimes to shock) in a couple people receiving the Pfizer vaccine, and wanted to know what Moderna had to say about it. The FDA said both companies had to watch out for this, apparently meaning watching people for 30-45min after injection with an epi-pen at the ready, or something vaguely like that.

Nobody knows the answers to these questions:

Being asked the wrong question!

Amusingly, when it came time to vote, the FDA put the wrong question on the screen: it was about the Pfizer/BioNTech vaccine, instead of the Moderna vaccine.

One can only imagine the yelling that went on behind the scenes… though it was quickly & easily corrected.

Issues that did not concern VRBPAC members: the cold chain

Much better here: Pfizer’s requires -70°C freezers, whereas Moderna’s can use ordinary freezers, and keeps in an ordinary refrigerator up to 30 days.

Weekend Prediction: The Pfizer vaccine will mostly go to urban centers, where larger teaching hospitals and the many research facilities have -70°C freezer space they can donate or lease. The Moderna vaccine will go to less urban, more rural areas where the facilities available are more basic.

James Hildreth, president of Meharry Medical College, an HBCU in the Nashville area:

To go from having a sequence of a virus in January to having two vaccines available in December is a remarkable achievement.

I think this is a really opportune time to move science forward, and I would say that the evidence – which has been studied in great detail – on this vaccine highly outweighs any issues that we’ve seen. 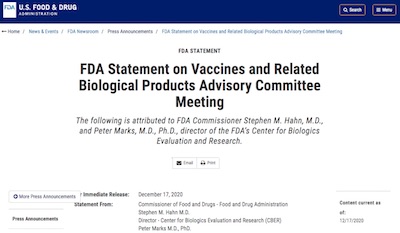 The FDA reaction was quick. A statement from Hahn (FDA Commissioner) and Marks (director of CBER) was issued [4], saying they agree with the committee and will work quickly toward an EUA:

Following today’s positive advisory committee meeting outcome regarding the Moderna COVID-19 vaccine, the U.S. Food and Drug Administration has informed the sponsor that it will rapidly work toward finalization and issuance of an emergency use authorization. The agency has also notified the U.S. Centers for Disease Control and Prevention and Operation Warp Speed, so they can execute their plans for timely vaccine distribution.

Inevitably, the Republican clown car rolls up and excretes incompetence 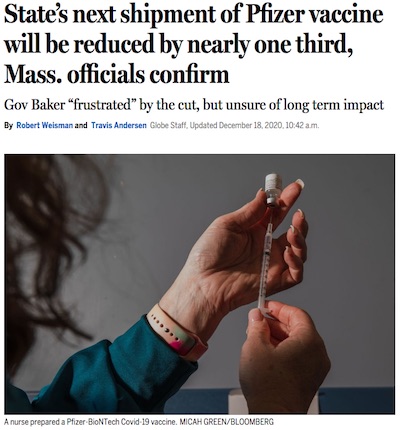 First up, in the venerable Globe, an article by Weisman & Andersen reports that the Federal government has reduced shipments of the Pfizer vaccine to Massachuesetts by 1/3! [5] Several other states have also been throttled by the Feds: New Hampshire, Connecticut, California, Illinois, Michigan, Washington, Georgia, Kansas, Montana, Nebraska, Nevada, Indiana, and Rhode Island.

Inexplicably, but sadly predictably, an HHS spokesperson denied any such reductions happened, in plain contradiction of the facts. 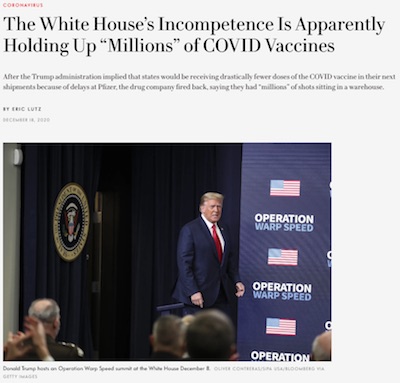 Second, a longer investigation by Lutz in Vanity Fair [6] poses an interesting conundrum. The Trump administration claims there are production problems from Pfizer. However, there are 2 inconvenient facts: 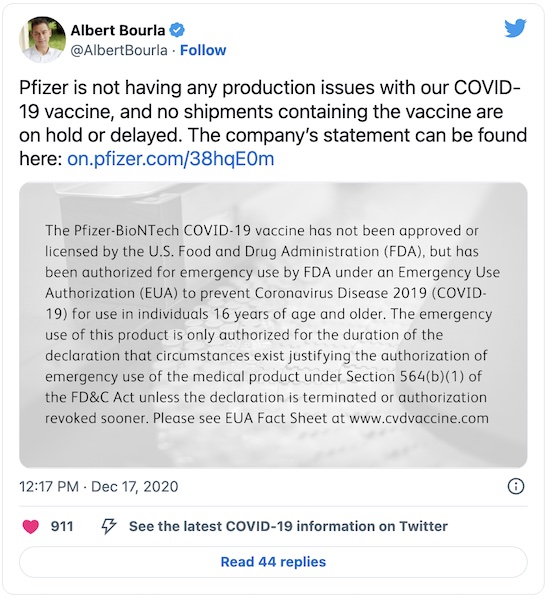 Of course, facts have a well-known liberal bias.

The FDA has formally granted the Emergency Use Authorization for the Moderna vaccine [7]:

Today, the U.S. Food and Drug Administration issued an emergency use authorization (EUA) for the second vaccine for the prevention of coronavirus disease 2019 (COVID-19) caused by severe acute respiratory syndrome coronavirus 2 (SARS-CoV-2). The emergency use authorization allows the Moderna COVID-19 Vaccine to be distributed in the U.S. for use in individuals 18 years of age and older. 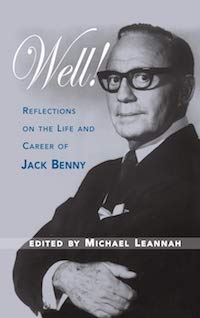 2: As with Pfizer, we don’t have a name yet. The formal substance id for clinical trial purposes is mRNA-1273, which pleases nobody. Apparently both Pfizer and Moderna have engaged naming companies who charge big bucks to make up the usual nonsensical names.

Here at Weekend Nomenclature LLC, we propose the names “MoCoVax” and “PfiBiCoVax” for Moderna and Pfizer/BioNTech respectively.

3: Once upon a time, in my now-distant younger years, I was acquainted with a young woman in my religious community who had the cutest lop-sided smile. I thought it was quite endearing. But I dithered, too gripped by shyness to say anything to her. That turned out to be fortunate, since it turned out she had Bell’s, and was quite self-conscious about it for the months it persisted. Any compliment from me probably would have been awkward! (Or maybe the opposite. We’ll never know.)

It’s definitely a disease that is quite annoying to those who have it, even though it usually goes away in weeks to months. ↩