From time to time, we make predictions here. Two of them were: high probability of COVID-19 vaccine boosters by fall 2021, and mRNA vaccines will dramatically change the future of vaccines. Guess what happened this week?

Fortunately, we know that boosters have been under development for some time, and that the FDA is prepared for accelerated approvals like the yearly flu virus variant vaccines.

Maybe in the fall we’ll all have to get a booster tuned to the VoCs (variants of concern). But until then, it’s just waiting for antibody levels to build, and for memory B-cells to form a grudge against the coronavirus spike protein.

Or here, last May:

Personally, I’m putting it at about 60% probability there will be booster shots required for the variants either in the fall or early next year (2021-Q3 to 2022-Q1, if you want to hold me to it and check).

Personally, I was putting the probability of the need for boosters this fall at about 60%. It might be time to raise this estimate, as it’s beginning to dawn even on the mainstream media: 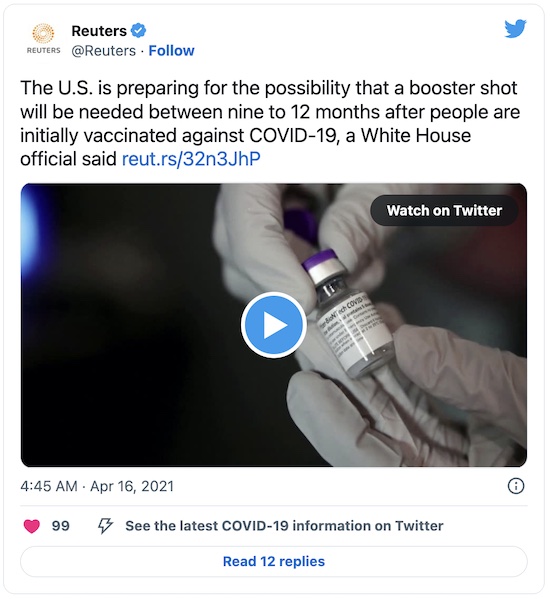 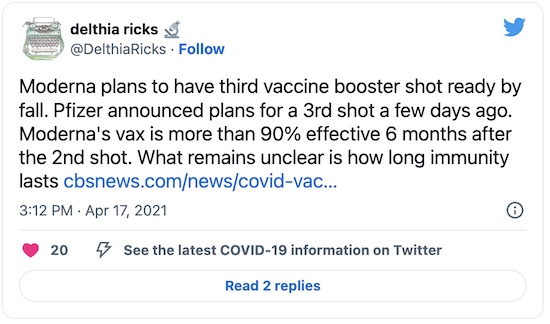 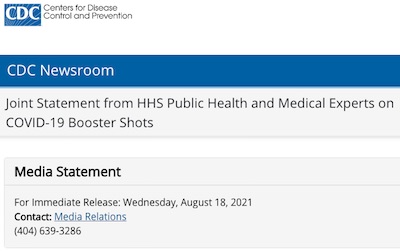 This week the CDC confirmed [1] that this will indeed be the case: first the immunocompromised, then healthcare workers, the elderly, then the rest of us in reasonably sensible order. The usual suspects issued a statement saying in part:

The COVID-19 vaccines authorized in the United States continue to be remarkably effective in reducing risk of severe disease, hospitalization, and death, even against the widely circulating Delta variant. Recognizing that many vaccines are associated with a reduction in protection over time, and acknowledging that additional vaccine doses could be needed to provide long lasting protection, we have been analyzing the scientific data closely from the United States and around the world to understand how long this protection will last and how we might maximize this protection. The available data make very clear that protection against SARS-CoV-2 infection begins to decrease over time following the initial doses of vaccination, and in association with the dominance of the Delta variant, we are starting to see evidence of reduced protection against mild and moderate disease. Based on our latest assessment, the current protection against severe disease, hospitalization, and death could diminish in the months ahead, especially among those who are at higher risk or were vaccinated during the earlier phases of the vaccination rollout. For that reason, we conclude that a booster shot will be needed to maximize vaccine-induced protection and prolong its durability.

Revolutionizing vaccines of the future

I’ve also been quite hopeful that the success of mRNA technology in vaccines will revolutionize our future, for both cancer vaccines and disease vaccines. For example, here, last November:

And it’s dead certain that we’re going to have a sea change in the vaccine industry, moving to more mRNA vaccines in the future. That’s even more good news. 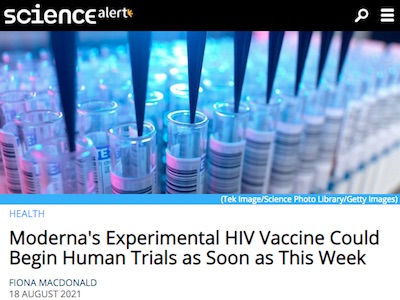 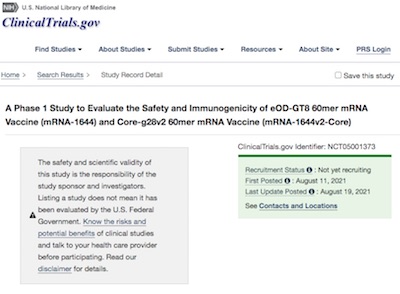 So this week it was unsurprising, though extremely gratifying, to hear that Moderna’s mRNA vaccines for HIV (there are 2: mRNA-1644 and mRNA-1644v2-Core; a third called mRNA-1574 is not far behind) are entering Phase 1 clinical trials this week! [2]

HIV has been a nightmare, as far as vaccines — nothing much has worked. Let’s hope this one works out better this time.

The clinical trial id is NCT05001373, which you can browse at ClinicalTrials.gov.

It’s a Phase 1 trial, so it’s small: 56 healthy adults. They go into 4 groups: one for each of the 2 vaccines being tested, and two groups that get both at various doses. There is no control group, because (a) we already know the background rate of catching HIV in the population, and this is almost all about safety of the dose arms.

It should take about 10 months to get an initial safety readout.