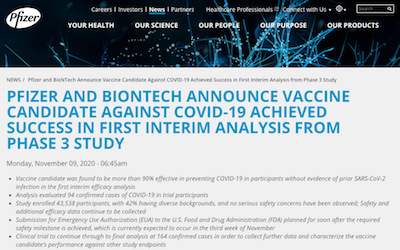 This is an interim readout from Pfizer & BioNTech [reference 1], meaning it’s an early look at the data using simplified analyses. And it’s just a press release: a bit of corporate propaganda to which your Weekend Editor has allergies, instead of peer-reviewed science. But still… 90% efficacy is very good news, indeed!

I’m very slightly surprised that Moderna wasn’t the first to do an interim readout, since they looked slightly ahead. But, a lot of this sort of thing is down to random chance, so that doesn’t mean much. What is meaningful: all the vaccines target the same spike protein, and what’s more Moderna and Pfizer both target it with an mRNA vaccine. So, if one vaccine works, they’re all likely to work (to varying degrees, in varying populations, but that’s a good thing).

And… mRNA vaccines will have been proven to work. That’s another good thing, since they can be developed very quickly.

But hey, remember the good news

At least we have preliminary evidence that it’s possible to make a coronavirus vaccine.

Now we can make the crosstabulation matrix in R:

Applying Fisher’s exact test, possibly while tasting tea, we get the result that the treatment & control arms are very statistically significantly different, i.e., the vaccine seems to be working:

The similar (slightly old-fashioned, but still serviceable) test of proportion confirms that result:

If we think like a Bayesian for a moment, we realize that each arm took a bunch of people, did something to them, and then measured the probability per unit time, $p$, of getting infected in each group. We can start from a prior uniform distribution for $p$, where we assume we know nothing at all about the likely value of $p$: $\Pr(p) \sim \mbox{Uniform}(0, 1)$. Then the Bayesian posterior distributions are Beta distributions:

We can compute values for each of those distributions, and get a MAP estimator (“maximum a posteriori probability”, here basically the mode of the posterior Beta distribution), and see if the two distributions are visually distinct when plotted as the above tests hint they should be. 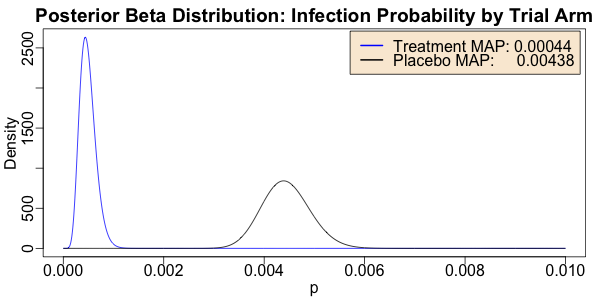 Here we see that the distributions are indeed quite distinct; the equiprobability point is way out in the tails of both. The MAP estimators of the probability of infection per time (here we’re rashly assuming all patients are in the trial for the same time which is wrong, but not horribly so) differ by about a factor of 10: 0.4% vs 0.04% (per whatever time interval it is between now and the average enrollment date).

Why That’s All Wrong

These methods, of course, are wrong! The statistically principled way to do this is using something called a Cox proportional hazard model, a Kaplan Meier plot, and a logrank $p$-value. The official analysis submitted to the FDA will certainly do that. But for now, the press release doesn’t report enough information to do those kinds of analyses (and if it did, the media would immediately garble it). So we are forced to use more dubious methods, in adherence to long-held tradition:

“If people aren’t given well-founded methods …, they’ll just use dubious ones instead.” — Jonathan Tawn, professor of statistics at Lancaster University & medalist of the Royal Statistical Society, on extreme value theory

So while this is wrong, it’s not great-whacking-stupid wrong. It does indeed confirm that even with just a few infections observed so far, the vaccine seems to work. It’s highly likely that the Moderna vaccine, which is also an mRNA vaccine against the same viral spike protein, will also work. It’s pretty likely that the other vaccines, using different technology, will also work.

And it’s dead certain that we’re going to have a sea change in the vaccine industry, moving to more mRNA vaccines in the future. That’s even more good news.

There’s a nice Bayesian view of this result at Economics and R, reposted on R-bloggers, specifically see [reference 3] and from Fells Stats [reference 4] (written by someone who took the trouble to dig through the actual clinical trial protocol document, which earns my respect; they find the point estimate is more like 97% for a variety of technical reasons).

Zvi, over at Less Wrong, wrote a nice summary of another sort [reference 5].

3: Economics and R, “A look at the Biontech/Pfizer’s Bayesian analysis of their Covid-19 vaccine trial”, reposted in R-bloggers.↩

4: Fells Stats, “The Pfizer-Biontech Vaccine May Be A Lot More Effective Than You Think”, reposted in R-bloggers.↩