Politics vs mask use & vaccine uptake in the US

Does political alignment in the US inform medically-relevant behaviors like mask use and vaccine uptake? Alas, yes: but not in a good way. 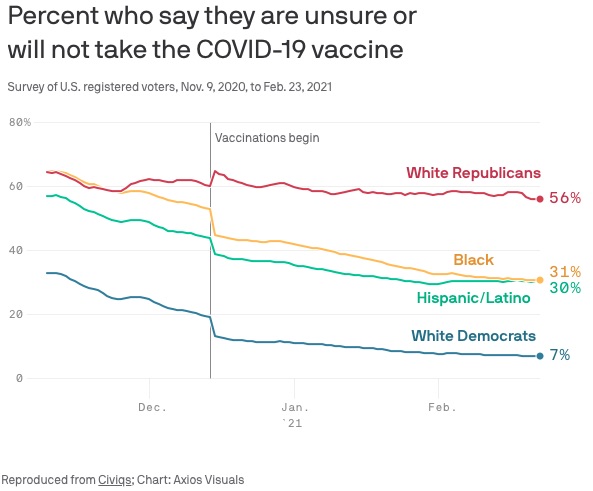 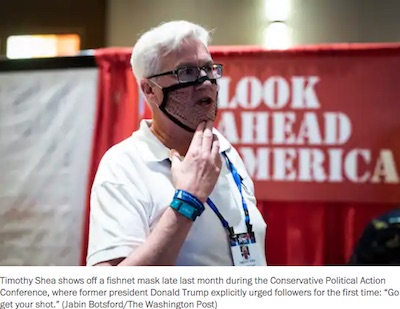 We know that some things help people avoid COVID-19, and hence avoid a pretty awful level of danger of disability or death: mask usage and vaccination. Unfortunately, we know that both of those are deeply, desperately, angrily resisted in the US in the red states. Their reasons almost don’t matter: their behaviors lead to death and disability, as well as the spread of increasingly vaccine-resistant variants to the rest of us, so they are public health problems for all of us.

Can we quantify that relationship statistically? 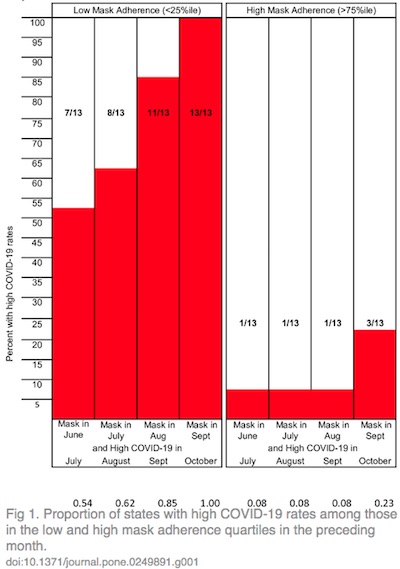 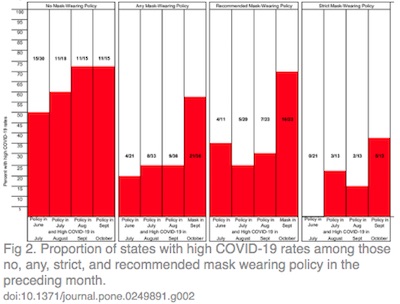 For no particularly obvious reason, the efficacy of masks is constantly under challenge. So, first up is a paper by Fischer, et al. [1] in PLoS ONE documenting the effect of masking over the last year. Their work is nicely summarized by 2 figures from their paper, reproduced here:

I’m kind of surprised we need the scientific literature to tell us things this obvious. But… here we are.

We previously remarked that vaccine uptake in red areas seemed lower, to the point that people were capitalizing on it to escape shortages in their blue areas. It appears that this is continuing, according to an AP report on red state vaccine uptake. [2]

The reporter, Russ Bynum, noted that in the CDC’s list of states with their rates of vaccine uptake, the top states were blue and the bottom states were red. This appears to be directly linked to partisanship: citing an AP poll, 36% of Republicans said they would resist getting vaccinated, vs 12% of Democrats.

This matters. Quoting Dr Howard Forman, professor of public health and management at the Yale School of Medicine:

“We could see substantial outbreaks for a long time,” Forman said. “It will determine whether we go back to normal in some cases.”

A suspicious look at actual data

Here at Chez Weekend, we wondered if that anecdotal report would really withstand statistical scrutiny: can we quantitatively related usage of vaccine supply & fraction of population vaccinated with partisanship at the state level?

We combined those 2 datasets into a single omnibus dataset [5], a sample of which is shown here. It shows the state name, the voting data (Biden %, Trump %, Trump Margin, and whether it was a Trump state, and the vaccine usage data (% population with at least 1 dose, % population fully vaccinated, and % of vaccine supply already in people’s arms). The voting data is for the 2020 election, and is final. The vaccination data was updated by the CDC as of 2021-Apr-16.

We wrote an R script to load & standardize the datasets, combine them with a left outer join into the omnibus dataset, and do the following statistical analyses. [6] A transcript of running it is also available in the references, for peer review.

We did both discrete and continuous analyses:

Here is a summary of the statistical significance of the relationship between Trump margin and the 3 vaccine usage measures: 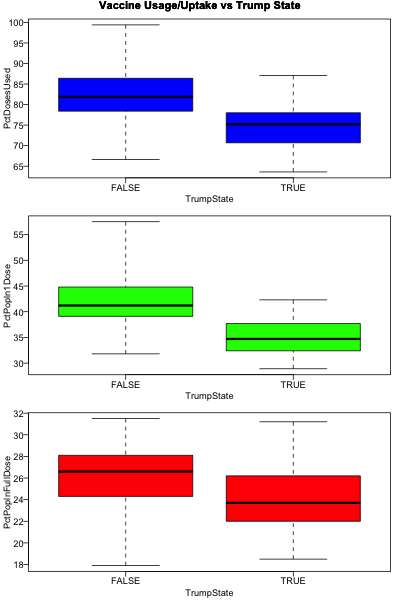 Here’s what the boxplot of vaccination measures vs Trump margin looks like. The black bar shows the median, the colored box shows the upper & lower quartile, and the whisker shows the range of the data. In all cases, the outcome is worse in Trump states. The difference is statistially significant by $t$-test FDR. 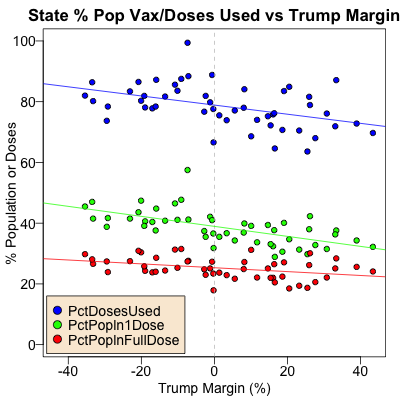 Next, here’s what the regression of vaccine measures vs Trump margin looks like:

Yes, the Trumpy areas of the US are both less likely to use the vaccines they have on hand, and consequently have less of their population partially or fully protected. The effects are statistically significant in both discrete and continuous measures. The effect size is large enough to be bothersome from a public health perspective, as Howard Forman said above re delaying the return to some form of normalcy.

Worst of all, we’re all stuck with the consequences of this knuckleheadery.

Beats me. I wish I could figure out how to persuade people not to be self-destructive. (In this, as in so many other matters!)

The consequences of slow/low vaccination rates are that viral variants are inevitably taking over, one of which will eventually have an escape mutation to evade current vaccines. Then we’ll need booster vaccines again. Fortunately, we know that those are already under development, and that the FDA is prepared for accelerated approvals like the yearly flu virus variant vaccines.

Personally, I was putting the probability of the need for boosters this fall at about 60%. It might be time to raise this estimate, as it’s beginning to dawn even on the mainstream media: 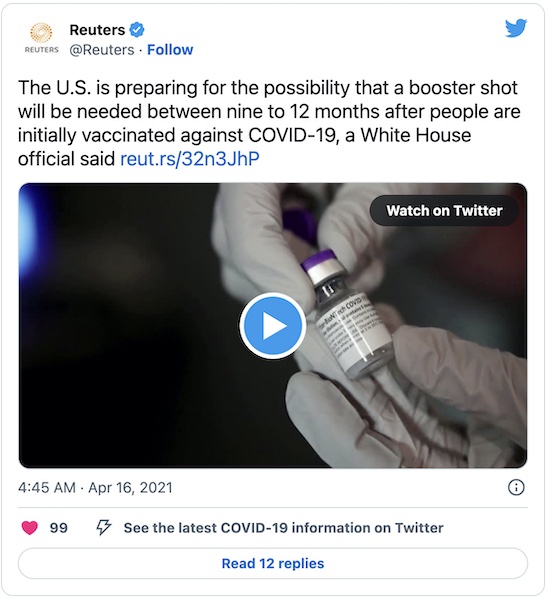 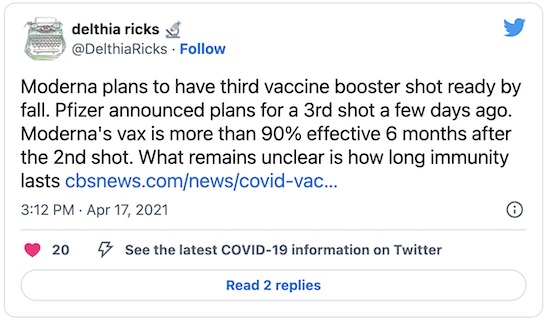 One could wish for the times to be less fraught with self-inflicted wounds from stupidity. But again… here we are.

I just discovered, after writing the above, that the New York Times is also on the case. [7] Here we did a state-level analysis; the NYT reporters show a somewhat more fine-grained county-level analysis that reaches the same conclusion. (Though oddly, except for a county-level map, their graphics are all state-level. Hmpf. NYT, I guess.) Also, it does not appear they did any statistical hypothesis testing to assess the significance of the relationship, as we did here; they’re busy with compelling story aspects of individuals.

Their graph on the right is approximately the same as the green regression line in our plot above:

Normally, we’d expect older people to be more conservative than younger groups, and to see that reflected in vaccination rates. Not so; the NYT shows us the resistance effect persists across age (though the youngs who do accept vaccination (dark blue bar) appear to do so in slightly higher numbers): 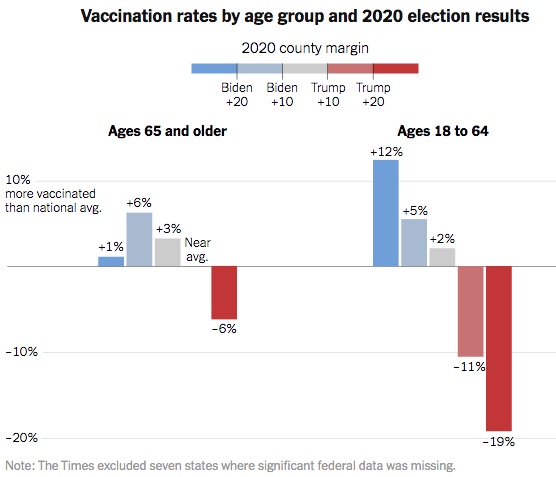 6: Weekend Editor, R script for analysis of vaccine uptake vs Trump margin, SomeWeekendReading blog, 2021-Apr-19. There is also a text file transcript of running the script, for peer review. ↩