Today I got shot (again)

Today I got shot (again). In the good sense: the second dose of Pfizer/BioNTech COVID-19 vaccine.

Last time was a Kafkaesque nightmare, both for getting the first dose appointment at all and then scheduling the second dose. This time, the appointment having been booked already, I just had to show up and do as I’m told. (“Showing up”, I can manage. “Doing as I’m told” has always been a lifelong struggle. But if I have to struggle a bit to take on board another dose of BNT162b2/PF-07302048 [1], then “struggle” is the order of the day.) 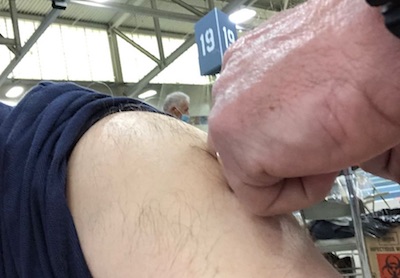 Herein illustrated (again) is your humble Weekend Editor’s portside dorsal manipulator tentacle, again being injected with a lovely dose of BNT162/PF-07302048, a.k.a. tozinameran/Comirnaty.

Again, the actual vaccination process – separate from the sign-up nightmare – went quite smoothly. The Weekend Editrix dropped me at a train station, and I took a couple of subway rides. I was early, so I sat in the station happily reading Pro Git on my phone.

At the appointed time, I took the short health quiz on my phone, went into the large building, presented my id/appointment/health quiz/vax card and was waved into line. A few seconds later, the injection happened. This time it was an older guy, a sort of gruff no-nonsense fellow like a drill sergeant. Friendly enough, though. And he got the job done.

The most oddball thing was that somebody next to me fainted, apparently due to a fear of needles. Still, that person seemed to get very attentive care from the EMTs who were standing by, so that was actually kind of good to see.

Then a boring 15 minutes in the waiting area, to demonstrate that I was not in anaphylactic shock, and I was done. The best part: I didn’t have to go back to the absolutely miserable sign-up web site to book any more appointments! A couple subway rides later, and I was back in the custody of the Weekend Editrix.

Maybe in the fall we’ll all have to get a booster tuned to the VoCs (variants of concern). But until then, it’s just waiting for antibody levels to build, and for memory B-cells to form a grudge against the coronavirus spike protein.

And most importantly: back to the miserable sign-up web site, to find a slot for the Weekend Editrix. In spite of her youth, she has now just become eligible, so… “once more into the breach”, as I read in an old book somewhere or other. So tomorrow when the new appointments drop, I’ll be back to madly refreshing 10 browser tabs all morning long, fishing for an appointment for her.

Tune in tomorrow, to see if there are more exciting sleepwalking adventures… which I would gladly trade for a bit of aches & fever instead.

My reaction so far has been pretty reasonable: pain at the injection site (upper left arm, and stronger than with the first dose), fatigue, mild sense of less control over body temperature, and so on. Not being able to use my left arm much is slightly annoying, but other than that, nothing worse than “slightly annoying”. Gratifyingly, no return of the sleepwalking from the first time.

Can we pre-dose with NSAIDs to prevent the after-vaccination blahs?

This post attracted one of the rare comments this blog occasionally gets (aside from the daily viagra and college essay ‘vendors’). Pablo, one of about 6 people world-wide who read this crummy little blog, wondered whether pre-dosing with NSAIDs to blunt the after-vaccination blahs would be ok.

The answer appears to be: no, please don’t do that.

Some public-facing advice from UC Davis Health Center [2] says that it’s a bad idea to use NSAIDs before vaccination, but it’s ok to do so as needed after any reaction sets in the next day: 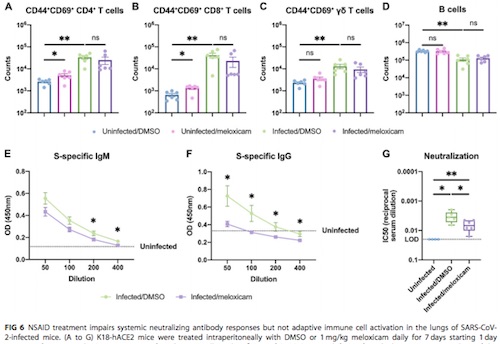 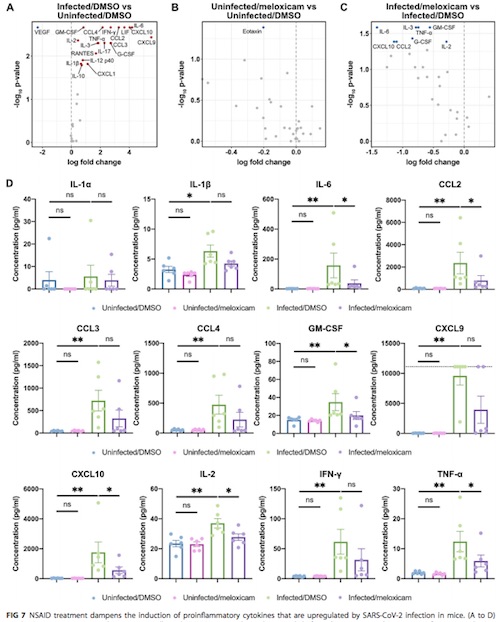 A more formal scientific publication in Journal of Virology by Chen, et al. [3] supports this quantitatively, especially in Figures 6 & 7:

They tested both ibuprofen and meloxicam (another NSAID used in arthritis pain), looking at the response in mouse lung tissues. It appears that the NSAIDs primarily reduced the response of the innate immune system (the early, non-specific immune system that tries to recognize infection generally, not any specific infection). This was observed both in the production of IgG and IgM antibodies, as well as pro-inflammatory cytokines, verified statistically by Mann-Whitney ordinal tests and quantitative $t$-tests. The adaptive immune response (later, very specific antibodies, was apparently not observed as closely).

This makes sense, as the post-vaccine blahs are mostly a product of innate immunity.

Conclusion: Don’t pre-dose with NSAIDs. Take them the next day, as needed, for side-effects.

(And remember: your humble Weekend Editor is a doctor, but not a medical doctor, and in particular not your doctor. This is intellectual fun, not medical advice.)

What about people who don’t get much of a reaction?

Another question, of the somebody asked me variety that keeps cropping up, is whether one should worry if one has no noticeable side effects. Did the vaccine fail to work? 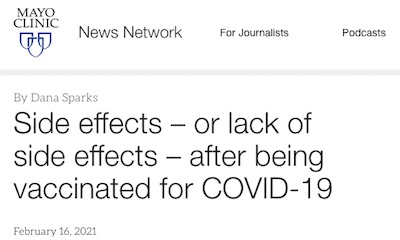 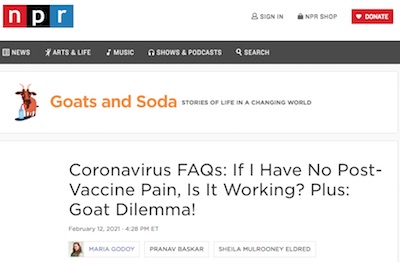 The consensus appears to be: don’t worry about it, the vaccine is almost certainly working and your immune system is probably in the “Goldilocks just right” category of response.

Yes, it’s still working. Everyone reacts a little differently to every vaccine. For some people, their reaction is no reaction. But your immune response is still building and the COVID-19 vaccine is still working.

Several physicians at the Mayo Clinic [4] had pretty much the same reaction to this question:

If people have less of a reaction, it does not mean they aren’t developing an immune response, Dr. [Greg] Poland emphasizes.
…
“Each of our bodies releases different amounts of chemicals or immune signals,” Dr. Poland explains further. “One body might release more than what’s needed, causing the physical reactions, and another body might release exactly the right amount of immune signals. It’s what we’ve called the ‘Goldilocks phenomenon.’ Not too much, not too little, but just right.”

NPR also interviewed a number of experts from Harvard Med School and the Tufts University’s Department of Infectious Disease and Global Health [5] with the same result:

… it’s possible to receive a (perfectly administered) vaccine and suffer no symptoms whatsoever. Just “consider yourself lucky,” says Harvard Medical School physician Abraar Karan.
…
“The fact that [an individual] did not see a reaction is not a reason to believe that their body did not develop an appropriate response that will be protective,” says Jonathan Runstadler, a professor at Tufts University’s Department of Infectious Disease and Global Health. Especially, he adds, as our bodies’ tendency to react to a vaccine “varies a lot between individuals and the individual’s circumstances, like where the needle went into the [patient’s] arm or where in the arm the shot was deposited.”

Finally, an interview with physicians from the Cleveland Clinic [6] also got the same answer, with an explanation of innate vs adaptive immunity:

The immune system has two distinct responses after you get the vaccine, and side effects are only associated with the first, said Dr. James Fernandez, and allergy and immunology expert at the Cleveland Clinic.

That initial response, known as innate immunity, is the body’s first line of defense against a virus, bacteria or other pathogens. It kicks in shortly after you get vaccinated and can manifest in symptoms like arm pain or flu-like symptoms, Fernandez said.

Some people may have a very robust response, but most do not, he said.

“If you don’t have side effects, it doesn’t mean your immune system isn’t working,” Fernandez said. “It might just mean that it’s working appropriately and isn’t kind of overshooting.”

Adaptive immunity develops over the course of the several weeks after you get each dose of vaccine. That’s why experts say full protection comes two weeks after your final dose.

“It’s really what the immune system does weeks later that is important,” Fernandez said. “I wouldn’t focus on those early side effects related to the vaccine to judge whether you had an [effective] response or not.”

So the bottom line appears to be: don’t worry if you didn’t get a strong reaction; your immune system probably has ‘Goldilocks-just-right’ response and your adaptive immunity is building over the coming weeks. If you’re still worried about it (why?), then maybe you can get an antibody test in a couple weeks (antibody, not PCR, not antigen). That will tell if your adaptive immune system has gotten the message.

1: Apparently now sporting the international non-proprietary name of tozinameran and brand name of Comirnaty, both of which names are known or used by approximately nobody. I liked my names better. ↩

5: M Godoy, “Coronavirus FAQs: If I Have No Post-Vaccine Pain, Is It Working? Plus: Goat Dilemma!”, NPR News, 2021-Feb-21. Also included, from the Department of Questions from Hyperspace: when it’s safe to cuddle baby goats during COVID-19. Did not see that one coming. ↩

Yay! I’m one week into dose 1. I’ve heard that pre-dosing with Tylenol - aka the somehow-rolls-off-your-tongue acetaminophen - blunts the discomfort with post-vaccine reaction, but I’m hesitant because of the argument that decreasing symptoms could also decrease immune system response. Not enough data, of course. :)

Thanks for stopping by, Pablo!

Your comment about pre-dosing with NSAIDs was something I was going to research for another post. But your question prompted me to take care of it today, so I added a section above.

It turns out there is enough data: pre-dosing with NSAIDs is a bad idea, but taking them the next day once side-effects have manifested is probably ok.