Paxlovid is a remarkable early therapeutic for people who’ve caught COVID-19. But… it’s very scarce for the next few months, ironically during the Omicron wave. Where can you score some paxlovid?!

Remember last spring when vaccines were being rolled out? The glacial speed, bungled supply chains, and general chaos? (Not to mention the Republican disinformation campaigns!)

Welcome to the second act: the rollout of antiviral therapies like paxlovid and molnupiravir… with glacial speed, bungled supply chains, and general chaos. (Though so far, the conservative disinformation campaign seems to consist largely of people claiming that paxlovid and molnupiravir are just ivermectin or hydroxychloroquine repackaged at a higher price. The people saying that seem to be utterly fact-proof.) 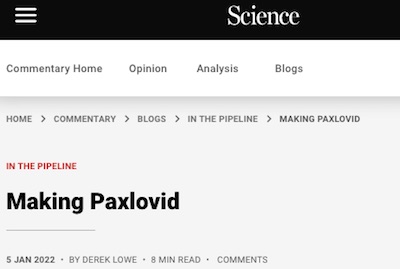 Part of the problem is the supply right now is approximately 0, and it’s hard to manufacture. Derek Lowe, the awesome med-chem blogger at In the Pipeline, offered an especially well-informed opinion a few days ago on where the bottlenecks are. [1]

Lowe’s summary of the chemical synthesis problems for paxlovid:

That’s how it goes in the fine chemical business - there’s a compound that no one really cares much about, until they do and they care hugely, and then suddenly no one cares about it again, until some other bizarre reason emerges to put it back into demand. Multiply that by the thousands of things that are or have been commercially available chemicals at one time or another.
…
What it all means is that when someone says “Oh, we can just make Paxlovid in plants all over the world”, they have left out the rest of the sentence, which is “. . .if we can get the starting materials”. And for now, supply of those starting materials is going to be tight.

So it’s not as simple as just letting other people (try to) build paxlovid plants!

Still… how can I get me some of that stuff?

So that’s one reason why paxlovid is hard to find. It will get better, though not on the timescale by which Omicron gets worse. What can you do in the meantime, if you need paxlovid and want to know how to beat the crowd?

I’m a little conflicted by this: shouldering your way to the front of the line might be good for you, but it’s bad for everybody who’s pushed back. That does real social damage to us as a community. So… conflict.

From NPR comes an article [3] which mostly points out the obvious, that paxlovid is in short supply. However, it does perform one very valuable service: it points us to a US Department of Health & Human Services web site for finding various COVID-19 therapeutics, the COVID-19 Public Therapeutic Locator. [4]

It can find paxlovid, molnupiravir, and evusheld for you. (Did you forget evusheld? Remarkably many people do.) Of course, we’re most interested in paxlovid. It can also do a number of visualizations like scatterplots and maps. More interestingly to a grizzled old stats nerd like your humble Weekend Editor, it also supports data downloads for independent analysis.

I think we need to say “well done” to the HHS on this one. 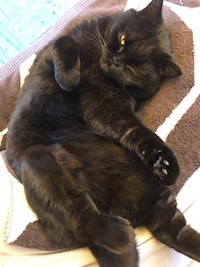 Ok, your humble Weekend Editor does not (yet) have COVID-19. Nor do the Weekend Editrix nor the Weekend Publisher. But are we gonna try this thing out anyway? (glares out the screen at you)

Of course we are.

So I imagined the unwelcome scenario where I had to hunt down a way to fill a paxlovid scrip for one of us here at Chez Weekend. (Well, maybe not the cat. He, as you can see here – click to embiggen – is unconcerned about your COVID-19 stuff. It’s a tomcat thing.)

So I put in the parameters for Château Weekend, hoping (without much hope) to find paxlovid available somewhere within sailing distance in the Weekend Zeppelin. The associated filter is shown here (click to embiggen):

The result is pretty interesting, shown here (click to embiggen). There are exactly 3 vendors in the extended metro Boston area that have paxlovid in supply (18-20 courses of treatment available). That’s 58 courses of treatment for about 4.87 million people (0.000019 courses/person)!

Yes, I think that officially qualifies as “hard to find”.

Interestingly, when I first ran this query a couple hours ago researching this article, there were something like a dozen vendors (in just Middlesex and Suffolk counties). So over the course of a couple hours, most of the vendors sold out.

So this is not a complete solution. Empirically, we observe that paxlovid courses of treatment sell out in a matter of minutes. And making it (marginally) easier to find vendors still doesn’t fix the supply problem, it just makes it easier for flash-mobs to dogpile on the few places that have what little stock there is.

Remind you of seeking out vaccine apppointments in March of 2021 yet?

We got work to do.

I took a look at the IHME dataset for predictions of the Omicron tsunami (we can’t really call it just a wave any more, right?). The big question is: Will paxlovid become available in time to save us from Omicron? The big answer is: No.

NB: When accessing this site with either a phone or tablet, for me it redircted to a completely useless mobile version that could not do filtering. The desktop/laptop version (URL ending in “/data/”) still seems to work fine.↩