Today the FDA’s Antimicrobial Drugs Advisory Committee (AMDAC) meets to decide whether or not to recommend emergency use authorization (EUA) of Merck’s molnupiravir, and antiviral therapy for mild to moderate COVID-19 in adults. Wanna read along?

Merck’s drug candidate for early treatment of COVID-19, molnupiravir, will be considered for EUA (or even approval?) by the FDA’s Antimicrobial Drugs Advisory Committee (AMDAC). This is the first step in a 4-step process, involving:

Normally this takes months, maybe a year because people are really careful about stuff on which people will literally bet their lives. Lately, with the urgency of COVID-19 and this being an emergency use authorization and all, it’s instead been taking weeks. So this has been quite fast: somebody is frantically turning the crank really hard on machinery that was never meant to go this fast. So when they get things done, we should applaud them.

If everything goes smoothly, molnupiravir can be manufactured, shipped, stockpiled in pharmacies, and prescribed starting sometime in December. We would, of course, like to see even faster action on Pfizer’s COVID-19 therapeutic, paxlovid. 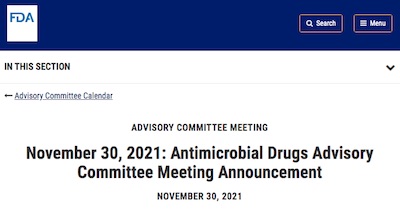 The FDA announcement of the AMDAC meeting [1] has pointers to all the meeting’s submitted documents and presentations that the AMDAC will consider. For completists and obsessives, all 7 or 8 hours of the hearings are livestreamed, and can be watched on YouTube as seen here.

The agenda for the meeeting [2] is basically pretty straightforward as these things go:

The questions and the vote placed before the AMDAC [3] are:

There are numerous documents to review here: 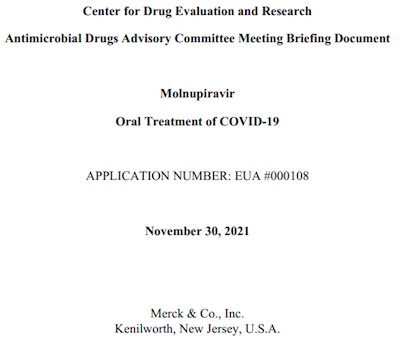 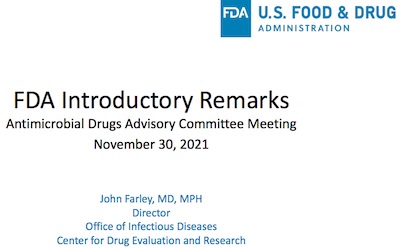 The general idea is to compare the assertion’s of Merck’s scientists with those of the FDA and see if they’re broadly the same. If so, then the results are compared against the rules for EUA (or approval), and after some discussion, there’s a vote over what actions to recommend to the FDA administration.

Hmm… normally Helen Branswell and Mattew Herper of STAT News live-blog these things, and we use them as our trusty safari guides through the FDA/CDC jungle. A quick trawl through STAT News comes up empty, though. Maybe we’re on our own today!

Absent our usual safari guides, let’s just take a look through the slide presentations ourselves.

A quick flip through the Merck briefing document reveals a lot more information, mostly details. But 2 things were striking to your humble Weekend Editor, surprised that they were left out of the slides: 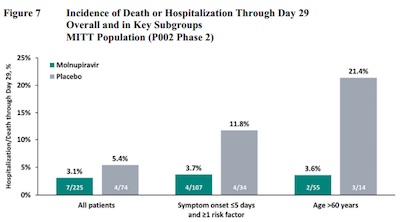 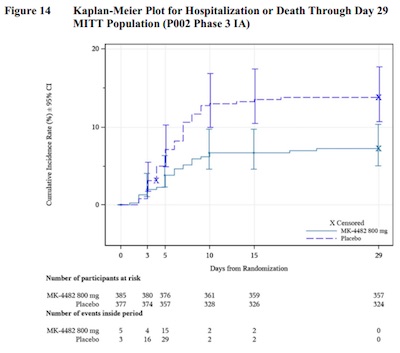 That’s… kind of convincing to me. (Though keep in mind I skipped most of the toxicity and mutagenicity arguments, so that might change my mind if I had the energy to pay attention to it. Aaaand… that turns out to be the case, sadly enough. See below.) 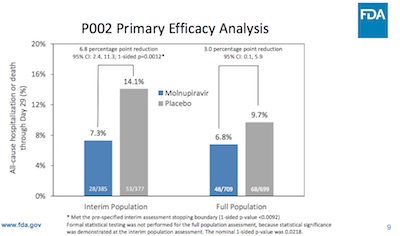 Looking through the FDA slides, I’m struck by 3 aspects:

(See below, in the voting: it was a mistake on my part to get bored and go grocery shopping during the tox portion. It turns out there were major reservations about mutagenesis during pregnancy!)

Honestly, I skipped over the public comment and committee discussion periods. After almost 2 years, I’m getting COVID-19 fatigue.

The voting took place around 4:45pm EST, which is cutting it fine since the meeting was supposed to end at 5pm. This is how these things always go, though: too much material for the time, and too many opinionated people who all want to talk. But their opinions are highly trained, so it sometimes behooves us to listen. Someday, we’ll learn to allocate the right amount of time to do so.

They used a Zoom breakout room for voting, though I’m somewhat confused as to why. Perhaps to show their votes to each other, but not the public? Or perhaps they’re just tired of being in the public eye all day? 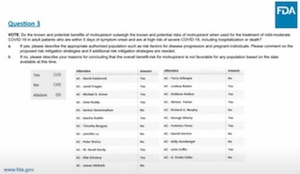 The result: 13 Yes, 10 No, and 0 Abstain. Here’s a fuzzy screen capture from the YouTube broadcast, where you can just about make out the names of who voted which way (click to embiggen). If you watch the video broadcast near the end, each member had to state their name and their vote and possibly some reasons. So if you want to know who went which way, that’s where to look.

Interestingly, given the looming hearings for paxlovid: if another orally available agent with a better risk/benefit profile were to become available, then AMDAC thought the FDA could reconsider approval. So maybe molnupiravir gets approved for a couple weeks until paxlovid? That would be unusually dramatic; a better course would have been to hold the paxlovid hearings first.

Weirdly, absolutely nobody said the word “paxlovid”. Maybe a legal reason for that?

At the end, the chair said: “In my many years of chairing these meetings, this is the first one that’s gone over time. I think that speaks to the complexity of the decision.”

Well, it looks like molnupiravir is recommended for EUA, though with less than complete enthusiasm. That’s fair, I guess: the benefit was less than the stellar interim analysis, and the mutagenic effects during pregnancy give one pause. The potential mutagenic effects in pregnancy really rang the AMDAC like a bell.

Now let’s see (a) what the FDA administration does, and (b) whether anybody accelerates the paxlovid hearing!

Multae apologiae for my rash decision to go grocery shopping instead of listening to the tox stuff. Maybe later when I’m not so tired I’ll go back and wade through the tox details. 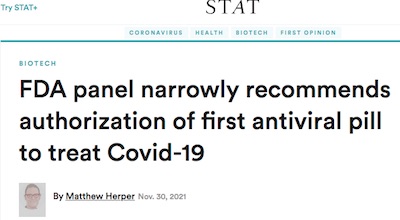 Now our safari guides at STAT News check in! [8] Matthew Herper reports, as above, that AMDAC members were concerned about birth defects and that the efficacy was not as stellar as initially thought.

In the end, panelists narrowly voted that the benefits of having an oral Covid treatment to keep people out of the hospital outweighed their questions and concerns. But the FDA may write a far narrower authorization for the drug than observers would previously have expected.

Addendum 2021-Dec-02: The efficacy in the back half of the trial

The efficacy of the first cohort was so good the trial was stopped because that was enough for approval and it would be unethical to continue giving placebos instead of just moving ASAP to approval.

But… the final report had only modest efficacy. What does that say about the back half of the trial?

Somebody asked me about that and I looked into it (after first doing it wrong, which is why the linked post is labelled “MeaCulpa”.

It turns out from the slides above you can work all this out. The median efficacies and their 95% confidence limits in the full, interim, and completion cohorts were:

So yeah, the second half of the trial population (the “completion” cohort) was pretty miserable. There were more hospitalizations in the treatment arm than in the control arm (but only 20 vs 15), so the efficacy was negative! Now you see why the AMDAC members were so concerned.