Apparently Moderna just had an earnings call, and there was some talk of whether multivalent Omicron boosters could be available in time for fall/winter 2022/2023.

As is apparently – and sadly – the now-ubiquitous custom, I first stumbled across the news because somebody rubbed my nose in a tweet: 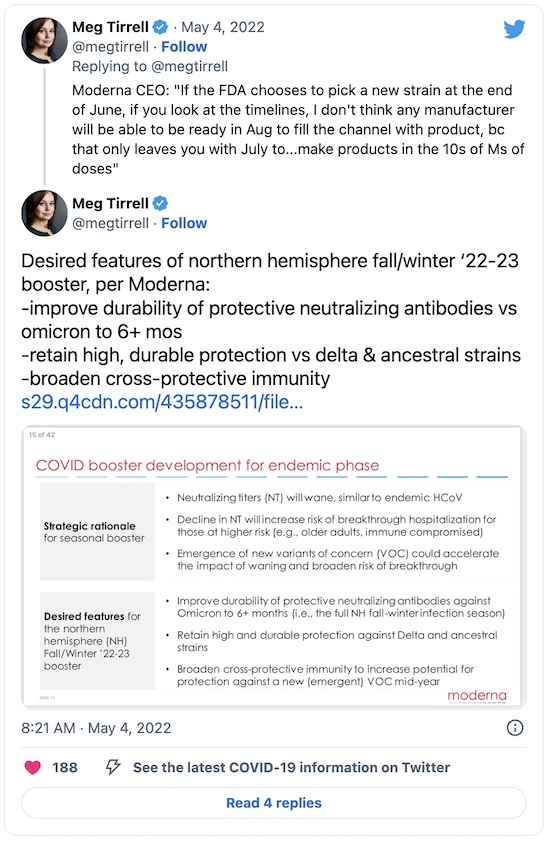 (Nothing against Meg Tirrell, who seems to be a fine reporter. It’s just Twitter that I want to avoid like the plague. As if people actually avoided plagues anymore, a traditional expression now somewhat in question.)

Just to be sure, I checked the FDA’s advisory committee calendar, shown here (click to embiggen). [1] Sure enough, I didn’t miss anything: no further official decisions, unless said decisions were taken in camera and not yet publicized to randoms like me.

So… Moderna might have a point here: if the FDA doesn’t decide (a) the criteria and (b) the specific results of which strains go into a mixture, it will be hard to manufacture in time for winter. Furthermore, Moderna is running a trial right now on a bivalent vaccine (q.v.). If the FDA says something else, then all that effort will be wasted (except to prove safety… again).

Hmpf. We better look into that.

So I got hold of a copy of the Moderna slides for their 2022-Q1 earnings call, and memorialized them here on this crummy little blog that nobody reads (CLBTNR). [2] Let’s have a quick look through them.

First, let’s look at the financial position, without getting into the BATGUANO BATGAAP details. 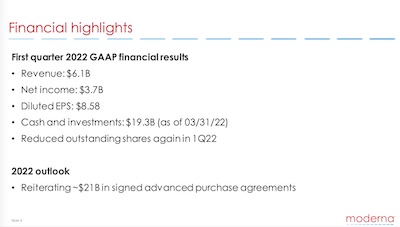 It appears Moderna is in an enviable position: $6.1 billion in revenue (presumably nearly all from Spikevax, given that it’s their only commercial product), and keeping about 60% of that as net income.

Also, they have an eye-popping reserve of $19.3 billion in cash.

That’s the current picture; the future looks pretty good too since they have a book of business of $21 billion in signed purchase agreements, again presumably for Spikevax.

So the current situation and the near-term future look pretty good. Given that they’re one of 2 vendors (with Pfizer) of a life-saving vaccine that every living human wants, it would be hard to see how to screw up so badly to make it otherwise! 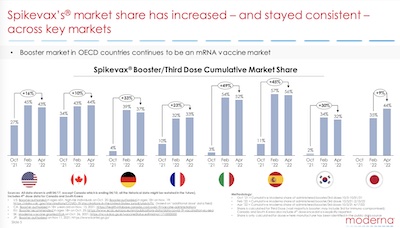 Where’s the money coming from? Well, with only 1 product, it’s gotta be that product.

But they’re disclosing something else of interest here: their market share over the last year has been growing in almost all markets, as shown here. Both Moderna’s Spikevax and Pfizer’s Comirnaty are excellent vaccines, but Spikevax appears to be displacing either Pfizer, J&J, or AstraZeneca vaccines in many countries. I’m kind of curious why… 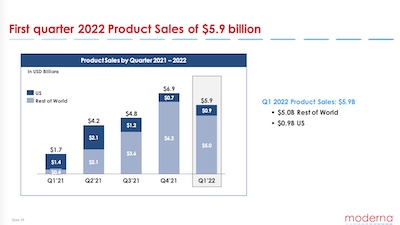 Also, we might ask where in the world the money’s coming from. It appears that at the beginning of 2021-Q1, most of the revenue was from the US (dark blue, 77.8% of sales). But just 1 year later, almost all the revenue was from the rest of the world and the US decreased remarkably (dark blue down to 15.3% of sales). So it sounds like initial Spikevax sales went to the US, and now they’re selling into the rest of the world.

I have mixed feelings about that, but it’s what seems to be the truth. 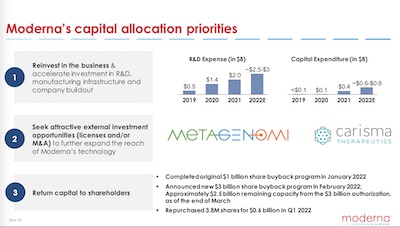 Lastly, we should ask what they’re doing with the money.

As shown here, their (claimed) capital allocation priorities are:

None of that is grossly unreasonable or nonsensical.

State of the Pipeline 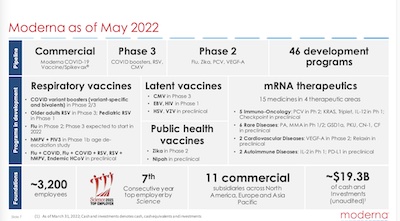 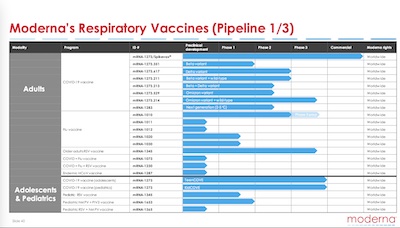 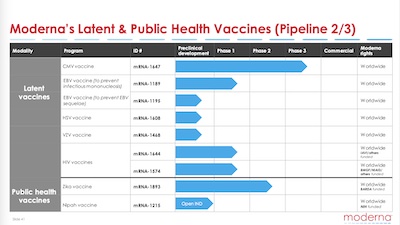 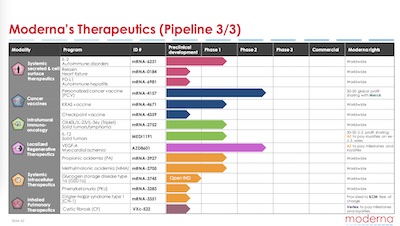 In this sort of pharma/finance kabuki theater, it’s more or less traditional to make wild claims of near-term product launches resulting from clinical trials whose success is assumed. These claims are defensible, but rarely realized.

True to the form of these dramas, Moderna is claiming their current Phase 3 trials “could lead to” 3 respiratory drug approvals in the next 2-3 years. That would be a subset of:

There are others in their pipeline, but given their success with vaccines, these have some reasonable air of plausibility about them.

The first slide shown here is an overview of their pipeline from high altitude (and 3 more slides with the details):

Finally, some words about their COVID-19 vaccine, boosters and future variant-tailored versions of the vaccine.

They have a lot to say about how boosters work; despite their financial interest in saying that, I have to agree that the scientific data says the same thing. So… yeah, get boosted. 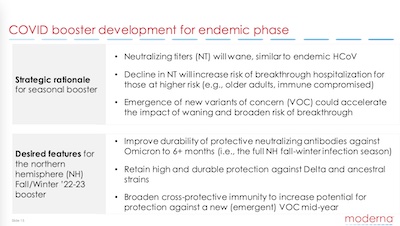 They’re also looking ahead hopefully, to the time when COVID-19 is endemic, rather than pandemic. To their credit, they’ve done some thinking about just what the desirable properties of variant-specific boosters should be. (While I’d prefer the FDA’s VRBPAC committee to have done this, they were busy being slow or working on other things.)

So, as shown here, what Moderna designed their multivalent boosters to do was fight the problems of declining neutralizing titers of antibodies and have some broader spectrum of activity against new variants. That includes SARS-CoV2 ‘classic’, as well as the more deadly Delta variant, the more contagious Omicron variant, and whatever else comes up in the next year. (Needless today, but I’m gonna say it: if we’d vaccinate the entire world faster, we could stop having to deal with variants like this. Political problem, not a scientific one.) 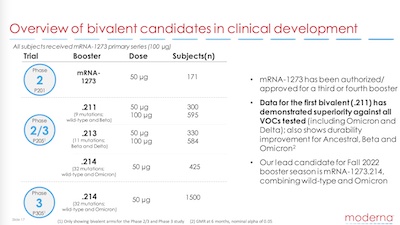 In service to that goal, they’ve been testing several bivalent vaccines, each of which has the ancestral SARS-CoV2 strain along with another variant. There are 3 of them, but 2 appear to be “fossil” vaccines: they were started back when Beta and Delta were the important strains, irrelevant now that Omicron has bigfoot-stomped them almost out of existence. (The moral to that seems to be: Moderna can make a vaccine candidate quickly, but the virus mutates faster than it can get through a clinical trial, let alone FDA approval?)

So there is a lot of readout data in the slides on the fossil vaccine candidates, but the more relevant Omicron version only gets its 1-month readout next month (2022-June). That one is mRNA-1273.214, in case you follow the id numbers, or want to Google something. In any case, summarizing: the readout data from the fossil vaccine candidates looks about like what you’d expect: no more than usual side-effects, good efficacy, some specificity for the 2 variants targeted. There’s no reason to expect that mRNA-1273.214, the one we want, might be different.

But of course the data will tell the tale. And then the FDA has to approve it. And then it has to be manufactured, at scale, to be available by fall.

So now we understand what Meg Tirrell was talking about at the beginning of this post: if the FDA doesn’t accept that ancestral + Omicron is the right set of strains, we have to start from scratch and won’t have time to manufacture/deliver/administer for this winter. 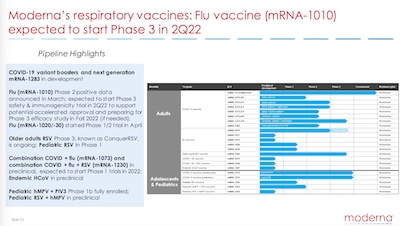 Also, in a pleasing burst of common sense, Moderna is looking into (a) an mRNA flu shot that could be quickly reprogrammed, giving health authorities more time to guess which strains will be relevant each year, and (b) a combination flu shot with COVID-19 booster, and even one with RSV as long as they’re looking at it.

This seems like a small thing, but it really could be game-changing.

Moderna is “all growed up now”, no longer that cute little biotech. They now have a market capitalization of $52.63 billion, which is 10x their market cap as of 2018.

On the one hand, numbers like that make one want to think “if only I had invested in them”. On the other hand, as an index investor who believes in efficient markets, I recognize that as wishful thinking about things nobody could have known. And since Moderna is in the S&P500, they’re in the world stock index fund I use. (Granted, it’s a tiny slice of the world economy. I probably own 1 screw in 1 doorknob on 1 of Moderna’s facilities. But … yeah: that screw? Mine. [3])

While it looks like they’re making a ton of money, keep in mind this is for vaccinating the entire world. If they could charge market-clearing prices, let alone the huge markup they probably want, it would be much more. The $20 billion in cash they’ve got now is the fruit of restrained pricing, largely enforced by governments. I’m sure their get-rich plan is to win with the vaccines, establish a rep, and then make bank on the rest of their pipeline. At least, that’s what I would do, though nobody listens to me.

I’m particularly interested in their multivalent Omicron vaccines and combo flu vaccine/COVID/RSV booster for endemic phase. The rest is exciting, but as a drug discovery vet I know better than to get too excited. Sure, they’re pursuing KRAS for intractable cancers (e.g., pancreatic adenocarcinoma), but so was my last employer for a decade or more. Some of those targets are hard!

Timelines: the June readout of the mRNA-1273.214 multivalent Omicron vaccine trial means the FDA really can’t change strains and expect delivery of vaccines for fall; even flu has more time than that! So Tirrell’s tweet actually made sense. I hear that sometimes happens on Twitter.

3: Go ahead and joke that I’m a screwy investor. It’s ok, I promise. I’ll wait until you’re done. Maybe I’ll spend the time looking at my successful portfolio while waiting for you to finish laughing. ↩