Somebody asked me (different “somebody” this time, though the same subject) about the Moderna Q2 earnings call. Do I look like I know the answer to questions like that?! On close inspection, though, it looks like a python swallowing a pig: a smallish company tackling a big problem with COVID vaccines.

Honest, this is not the all-Moderna-all-the-time blog! You want that, you go to their web site. This is the anxious retired statistican research scientist blog, where people keep asking me questions about COVID-19 vaccines during the pandemic. Promise there will soon be more content on other subjects!

Also… really, I dunno why I should have an opinion about earnings calls? Those things are a cross between kabuki accounting and managerial propaganda theatre designed to convince analysts to give a good rating, or to put a postive-mental-attitude spin on bad events. For example, my rule on how to read a stock proxy: the good news is in the front under the picture of the chairman, and the bad news is in the back in the footnotes to the financial statements. Nothing deeper than that, really. And nothing less cynical.

Still… somebody asked me “What do you think of this?” “This” turned out to be a fairly vanilla quarterly report to analysts. Nearly every big company, especially public ones, and many small ones, do this. The slides are heavily reviewed and sanitized before disclosure to the public: to be truthful, not to reveal company secrets, and occasionally not to raise expectations too much. It seems to be the Q2 update from Moderna on 2020-Aug-05. Let’s see if we can make anything of the contents!

One of my close associates described them as “a very promotional company” which “did some very hype things” and had “ethical problems”. I was curious to see if there was any evidence of that, and am happy to see that there’s nothing here with which I have a problem. (Other than the usual very low opinion I have of corporate types. As these things go, the report looks ok.)

A Look Through the Slides 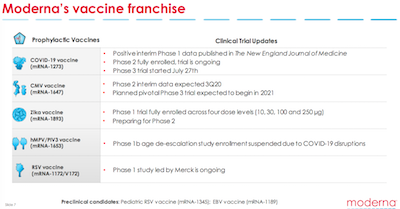 For a (mini-) pharma company like Moderna (“mode RNA”, get it?), this involves a pipeline report. They will tell you exactly nothing about their preclinical research which is where all the exciting new ideas are (and where I spent the bulk of my career). But they will tell you all about products that are in development, i.e., clinical trials – what the compound is, what the disease application is, what the patient biomarker is, what stage of trials they’re in, what results have been approved by the regulatory bodies for release, etc. They will do this until submission to the FDA and hope for approval, or until they fail (in which case they often sink beneath the waves like a rock, never to be seen again except in case of lawsuit). So here on slide 7 you see the stuff they have going on that they want to tell you about. They know you want to hear all about COVID-19 vaccines, but they’re gonna make you sit through reports on their CMV & Zika vaccines now that they have your ear.

So Moderna is telling you that they have (a) a highly innovative technology for delivering mRNA-based therapies, and (b) an advanced pipeline full of potential near-term approvals. Point (a) is without a doubt true: I know some of their people and they’re really good (and only disklike one of them, who impressed me as being a bit of a predator), and their technology is also good (others have been developing some similar technology, and someday there’s gonna be a patent war hated by everybody but the attorneys). Point (b), on the other hand, is arguable.

This slide deck is their attempt to argue both points to you in their favor, so you’ll think their stock is worth a lot — and despite what anybody says about this being “a very promotional company”, this is absolutely normal behavior for a biotech and sometimes for a pharma company. Yes, they’re boasting; boasting of this very specific, very carefully sanitized-by-lawyers form is what this kind of earnings call presentation is all about! 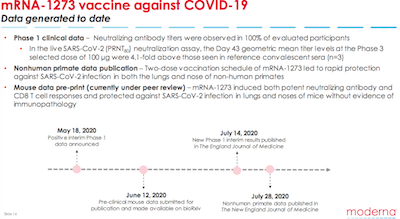 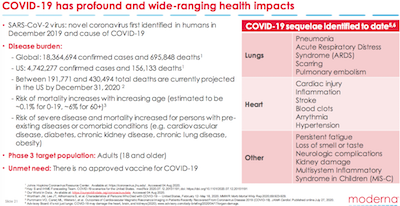 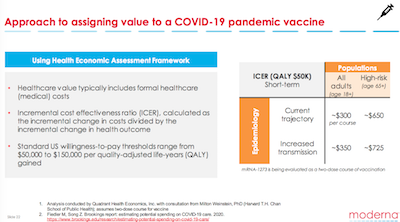 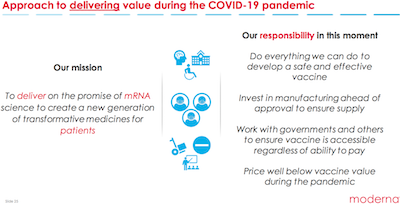 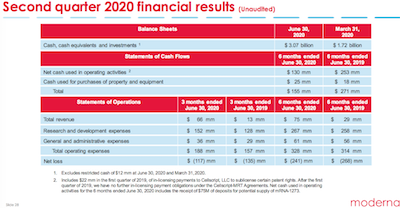 So, unlike my friend’s judgement, I have no problems with them ethically: they look like everybody else, and are at least trying to do the right thing, to the extent that they’re betting their company and probably their careers. They are self-promoting, but no more so than one would expect. They are pretty up-front about the existential risks to them, at least if you know how to read a slide deck like this.

OTOH, I will not personally invest in them. Not because I don’t like the company, but because one should invest in index funds! (Give your stock-picker friends a minute to let their head explode; they’ll be back with us in a minute.) For example, Vanguard’s VTWAX fund invests in substantially every investable company in the world. Once Moderna’s big enough, they’ll be in there too. In the meantime, picking stocks you think are undervalued or good growth opportunities is saying you’re smarter than every single other market-maker out there who has set prices the way they are.