Today I got shot (a fifth time)

Today I got shot for the fifth time this year. Again, not guns and not COVID, execrable as they both are. Influenza vaccination this time.

Flu vaccines: they’re for everybody

As usual, XKCD #2515 properly summarizes everything in just a few words, and even fewer lines:

Influenza, a.k.a. “the flu”, is not trivial. It’s a respiratory virus that in a typical year infects 5-15% of humanity, with about 3-5 million severe cases annually, and something around 650,000 deaths world-wide (according to Wikipedia). We tend to dismiss it as “just the flu”, but numbers like that are nothing to sneeze at. (Ahem.)

Also, there’s almost certain to be a 4th wave of COVID-19 in the US this winter, as people in the north go back inside into rooms with limited ventilation, which are also partially populated by unvaccinated knuckleheads. Look, at this point you have ony 3 alternatives:

There is no 4th alternative in which you’re not already somehow immune and yet you somehow evade Delta. None.

So, trying to be a reasonably smart boy with a good survival instinct, I got a flu shot today.

“Isn’t it a bit early in the season?” the Weekend Editrix asked. Sure, but that’s all the better: give my immune system a chance to build itself up before flu becomes an issue. 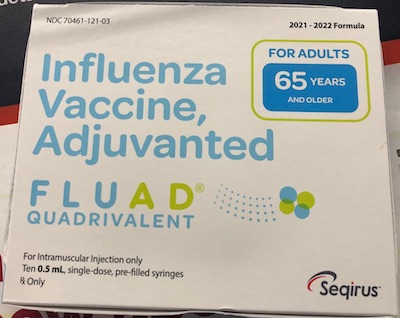 The funny word “quadrivalent” means it immunizes against 4 strains of influenza. Each year, we have to make a prediction/guess about which strains will make it into our winter and become a problem. Sometimes we get it right, sometimes not. This year it’s 4 different strains that look like the mooks we want to avoid. Every year it’s different, since the flu viruses mutate so fast, jumping from chickens & ducks to pigs to humans. (Especially in Asia, where integrated agriculture is still common.)

And do you see that blue box in the upper right, the one that says this is the “geezer version”? We elders have typically somewhat weaker immune systems. So they crank up the dose given to our immune system, to smack it around a little and make sure the not-the-flu message gets through. I am now the happy recipient of 4 times the dose given to the youngs!

It’s only been a couple hours and my arm is a little bit sore already; tomorrow promises to be interesting. And I mean “interesting” in the sense of “feel a bit crappy and spend the day on the couch with Netflix” as opposed to remaining unvaccinated and having an even more “interesting” near-death experience this winter.

All good. It took the pharmacists a while to figure out my insurance: they kept trying to use Medicare Part B instead of Part C, despite my mild-mannered suggestions to the contrary. As with most American medicine, insurance is the biggest problem; the actual care is ok.

Now the trick will be to convince the Weekend Editrix to get hers. Wish me luck.

Last night I had a sore arm, and was a little bit tired & achy. Nothing terrible, just enough to plant my behind on the couch with some tomes of hypergeometric functions.

Today I felt pretty normal. That turned out not to be the case, since the exercise & yoga class in the early evening really exhausted me more than usual. Still, a couple hours later… I’m fine.

Flu vaccinations: highly recommended. Get yours, too.

1: Nope. Not today. Too busy making antibodies. And, truth be told, fiddling about with hypergeometric functions from the previous post. [↩]

Hey - I just got my flu jab, too! No side effect until this afternoon, la, la, la, and then I sat down on the couch and woke up three hours later, thinking, did I just…?

Totally worth it. And even got to comp an afternoon nap!

Right there with you. Planning on spending some quality time today on the couch with the cat, the computer, and Netflix.