Today Pfizer announced they’ve submitted the final data package to the FDA for their COVID-19 anti-viral oral therapy, paxlovid. Wanna take a look at the (scant) data we have so far, as a holiday gift of sorts to all of humanity?

Paxlovid on the precipice

Ok, why is everybody so tightly wound around the axle on the subject of Pfizer’s paxlovid?

But… we thought these ame thing about Merck’s molnupiravir, but the efficacy basically fell through the floor (i.e., went negative) when the data was completed, and had major safety concerns with mutagenicity and breeding new variants.

So we’re either going to get all our dreams of holiday gifts to come true here, or have the fantasy balloon of COVID-19 treatment popped painfully.

The paxlovid data package submitted to the FDA this morning 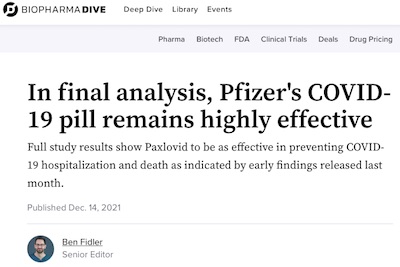 This afternoon in my email was something from BioPharma Dive. (Yeah, I was slumming. You caught me. In my defense, LinkedIn thought this was “appropriate” for me and began emailing it to me; being a lazy slug I haven’t bothered to figure out how to turn it off yet.) But since I was anxious to see paxlovid move along toward approval, so people can stop moving along toward death, my eye was caught by a title that contained the words “Pfizer”, “COVID-19 pill”, “final analysis”, and “effective”. [1]

Yep, it apears the data package for paxlovid has been submitted to the FDA. In the comments at TheZvi, I had opined that if it were submitted by last Friday, then with perfect scheduling and nobody playing “Joe Manchin at the FDA”, we might get Emergency Use Authorization by the end of this year. Well, we didn’t make last Friday, but we made today, a slip of 4 days.

Our next stop is the primary source: the Pfizer press release from 6:45am today [2], saying that the data package was delivered to the FDA and one or two coy facts about the good news contained therein. Keep in mind this is a press release, where Everything Must Be Good News. Here at Chez Weekend, we are always and invariably deeply and darkly suspicious of press releases. When we can see the actual data package and, more importantly, the independent FDA analysis of it, then we’ll really know what’s what. This is preliminary!

I also decided to check out STAT News, where Helen Branswell and Matthew Herper have been keeping me sane (sort of) the last couple months. It turned out that Herper got the gig here, and wrote a summary. [3] 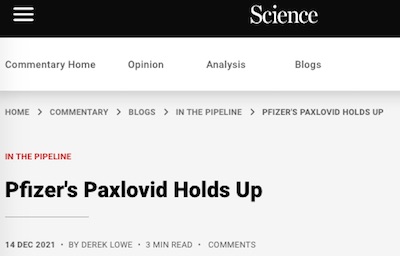 Also, the formidable med-chem blogger Derek Lowe weighed in at In the Pipeline. [4]

It really looks like we’re all reading the same press release, and coming to the same conclusions. At least we agree about what it says, even though we wish it said more (like a link to the actual data package!).

Nobody outside Pfizer and the FDA have seen it yet. I just checked the calendar of the FDA advisory committees, and paxlovid is not there yet. Keep in mind the FDA just got the data either last night or this morning, so they’re a little busy right now and won’t surface even for a pizza until at least sometime tonight. They won’t know for some days if they have a similarly reanalyzed result that will justify an AMDAC meeting.

Also keep in mind that AstraZeneca’s evusheld was approved without an external advisory committee meeting! The FDA just said, more or less, “Looks right to us. Good job. EUA.” and that was that. They don’t always need an external committee to tell them what to do.

So that means we’re working from the Pfizer press release, and a couple news reports by reporters whose only source is that same press release. As I said, preliminary. We’ll have to wait for the FDA to emerge from its pyramid with The Official Word, but at least the clock is ticktocking on that now. I imagine anybody who works on this at the FDA is painfully aware of this.

Ok… if you must. What’s in the press release?

Here’s what I got out of the sources below:

Ok, that’s more or less it:

So… things could change.

Addendum 2021-Dec-16: Looks like the Europeans got there first… sort of

This week the European Medicines Agency (EMA) had a meeting of its Committee for Medicinal Products for Human Use (CHMP), and they advised that paxlovid can begin to be used in Europe (according to a Pfizer press release). [8] The EMA is (sort of) like the US FDA, and the CHMP is a bit like several of the FDA advisory committees (AMBAC, VRBPAC in this case).

They authorized it under European regulations which are (again, sort of) like the Emergency Use Authorization in the US, i.e., it’s not fully authorized and it’s up to the medical authorities of the member states to decide to allow it on an emergency basis. So lots of political Rube Goldberg machinery has to wheeze into action… but at least it’s action.

They advised it for patients who (a) do not yet need supplementary oxygen and (b) have other risk factors for the disease, and that it should be administered within 5 days of symptoms. So, as predicted above, they wrote for it somewhat narrowly. They hedged a bit on “adults at standard risk”, but said it was being studied.

Apparently the fact that paxlovid showed in vitro activity against Omicron was of some interest, as is completely understandable given the steep trajectory of Omicron.

Reuters reported just this morning essentially a rumor that molnupiravir and paxlovid will be “approved” (presumably under EUA?) this week, “according to people familiar with the matter”. [9] Or, apparently at least “three of the people”, who asked not to be named. It looks like Wednesday (tomorrow!) would be the earliest this can happen.

I hate anonymous stories like this. We can’t check anything! And there’s nothing on the FDA’s AMDAC and VRBPAC committee meeting calendars, so it would have to be an approval without the external advisory committee, like evusheld. That’s somewhat rare, but it can happen. Maybe the paxlovid data is good enough to warrant this; molnupiravir looks like a hot mess right now. A sense of urgency, I guess.

Still… maybe tomorrow will be A Good Day. In the meantime, as Reuters says:

Pfizer claims 200,000 courses available this year, and 80 million next year.

This doesn’t tell us much about the time frame we’re looking at, beyond minimal availability before 2022. It sounds like a gradual ramp up that will mismatch the exponential ramp up of Omicron.

If we didn’t have litigation concerns, we could maximize the likely efficacy of each dose by delegating the prescription decisions to doctors who were informed of the degree of shortage. Or they could use something like the Charlson Index, slightly modified to correlate more closely to observed morbidity in Covid patients.

Instead, we’ll probably have a cruder, less efficient triage situation.

No question: it will be tricky, especially with initial supply constraints.

Given the likelihood that ritonavir interacts with prescriptions already being taken, it will require a physician who knows drug interactions and who’s willing to take a close look at the patient before prescribing. And given the fear of resistance mutations if used too widely, I’m betting the FDA & CDC authorize it for a high-risk population only.

But I’m afraid that observing American reactions to the pandemic has turned me from an idealist to a cynic. We’ll probably just fight about it. There are already conspiracy theories claiming paxlovid is repackaged ivermectin at a higher price, so they call it “Pfizermectin”.

I honestly just don’t know what to do about stuff like that.