It seems I’ve been retired for 2 years now. What can 2 years of perspective tell us?

I’m a little disturbed that I don’t have an answer to that question.

I retired in 2020-July, right into the teeth of the pandemic, lockdowns, and anxiously awaiting vaccination. We stayed home, had Zoom meetings, got groceries delivered (and tipped well to the people taking that risky job), and so on. It was not… typical of the ways I’d imagined retirement.

(How did I imagine retirement? Academic libraries, seminars. Maybe an adjunct professor teaching statistics to undergrads – on the theory that they may one day encounter some evidence and should have some idea of what to do with it. With adjournments to Club Med a couple times a year. And I had sort of hoped to work on future President Elizabeth Warren’s campaign. Silly me.) 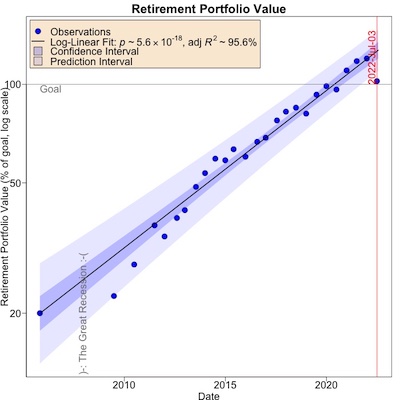 I watched our retirement portfolio plunge in 2020, then soar… and now plunge again in 2022. Yes, I held and rebalanced. No, I didn’t like it.

Note the last data point’s plunge in the first half of this year, back toward the threshold. That’s… nerve-wracking. Nobody’s happy to see stuff like that, though most people bury their heads in the sand and refuse to look. At least I’m trying to be truthful with myself here. 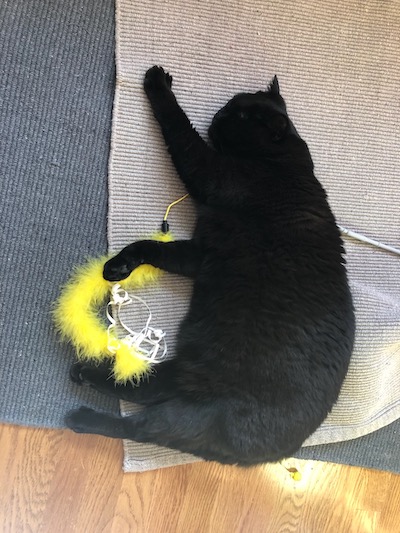 The cat is the only household member happy with this state of affairs, since it meant he got to have both his care-givers at home and available full-time. I mean, look at the magnificent bastard: at least he’s happy. (Mostly.)

The Crummy Little Blog That Nobody Reads (CLBTNR)

And I’m somewhat happy about this CLBTNR. Though I do wish it were somewhat more widely read, maybe commented or cited elsewhere a bit more often. At any rate, I’m happier with the blog than I thought I’d be: I thought I’d struggle to have something to say once a week, and that appears to have been no problem at all.

It’s led to a minor change in mind-set: when I see a bit of interesting news, I think: Should I really believe that, and how would I persuade others to “believe it or not”?

So, yeah: I really dunno.

I do know we both desperately want a more normal life than the last couple years have been. A life filled with less pandemic, less American fascism & Republicans, less war, less steep economic inequality, less anti-intellectualism, … less of a lot of noxious things. Less of society sliding back into the ignorant mud.

What I don’t know is how to get enough of my co-citizens to do either of those things in the proper direction. I don’t even understand why they won’t get vaccinated and won’t vote more lefty. Or, at least, reject the fascism that’s au courant among Republicans. Basically, I don’t get the wooden-headedness that seems so much worse in the US now than ever before in my life.

In the words of one of my favorite historians, Barbara Tuchman in The March of Folly [1] [2] [3]:

Wooden-headedness, the source of self-deception, is a factor that plays a remarkably large role in government. It consists in assessing a situation in terms of preconceived fixed notions while ignoring or rejecting any contrary signs.

Sorry, that’s everything I got nowadays. Yes, it’s dark. The times are dark, and apparently so am I, despite attempts to “show an affirming flame”, short of setting wooden heads afire.

In the main story, Unity is known less for her erudition and more for her penchant for blowing things up.

And who among us hasn’t wanted to do that, lately? It’s a viewpoint with which I have increasing sympathy, having just reviewed the NYT’s list of SCOTUS decisions this term. (Blog post discussing them here.)

I really gotta learn to take my own advice and disconnect from the news a bit more.

Ahyup - I can relate! And to quote what can only be called the “url story” of a web comic I have been fond of (https://skin-horse.com/):

While the Greek there is doubtful, the “Ahyup” is pristine-pure New Englander. You never really leave New England. :-)