The Supreme Court of the United States (SCOTUS) has a 6-3 conservative majority. Have the cases and decisions become any different as a result?

A general sense of foreboding 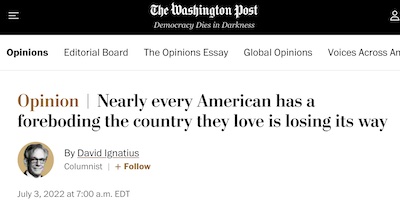 David Ignatius writes at the WaPo on the general sense of foreboding many Americans now have [1]:

What does our national portrait look like on this Independence Day? Many of us see an angry, traumatized face, rather than the radiant glow of the Founders. That’s the odd thing about this hyperpartisan moment: Nearly every American, whatever their political perspective, has a foreboding that the country they love is losing its way.

Now, I understand why liberals and independents are traumatized: we’re watching knucklehead theocrats drag the country back into the pre-Enlightenment mud. But why are the conservatives traumatized, when they’re getting all the destruction for which they’ve lusted, these many years?

And it’s not just a government problem, it’s also in the private sector, education, and healthcare:

It isn’t just a government problem, though. Private-sector productivity has been stagnant for decades, and corporations struggle with bureaucracy and bloat. Universities spend nearly as much on administration as teaching, and administrative costs account for a third of total health-care spending.

Ask any private sector employee about management bloat with all the MBAs. Ask any professor about the crushing burden of yet more administrators. Ask any doctor about paperwork and reporting in general.

Some people get so angry they want to burn the house down and start over.

We’re not at that cataclysmic point yet. I see positive signs in the slow but growing Republican willingness to challenge Donald Trump, and in the broad, bipartisan anger at the extremism of recent Supreme Court decisions. But bad things can happen to good countries, as our modern history shows.

Still… I thought conservatives were getting their chance to “burn the house down”, to use Ignatius’s phrase. Don’t flames make nihilists happy with their arson? Are they so delusional they still think they’re victims? Is the prospect of Democrats having even a sliver of power, not even enough to govern as is the case now, so threatening?

How partisan is SCOTUS, historically speaking?

Thomson-DeVeaux & Bronner write at 538 that the SCOTUS is now more divided politically than it’s been in generations [2], thanks to 50 years of effort by Republicans to pack the court with extremists.

Their analysis is pretty clear:

The conservatives answered by delivering the most far-reaching slew of rulings in modern memory. It’s now abundantly clear that Trump’s appointees are in control of this court, and they’re not searching for consensus. In fact, the divide between the court’s Republican and Democratic appointees is deeper than it’s been in the modern era.

(Keep in mind that “modern era” means “since the American Civil War”, so don’t take a great deal of comfort from Republicans stopping just short of violent insurrection and civil war.) 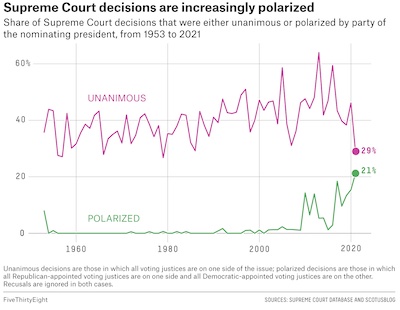 Cold, hard data support this: Thomson-DeVeaux & Bronner point out that historically, about half of SCOTUS decisions are unanimous, and those exactly along partisan blocs are rarer. No longer, as shown in this plot of the % decisions unanimous and partisan bloc over time since 1953. This is clearly a SCOTUS in a pathological state. 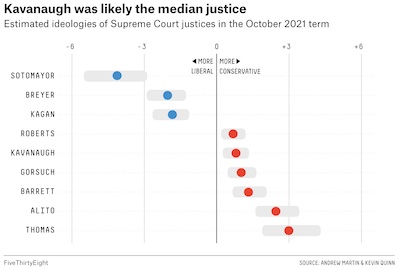 And it’s not just the group behavior that’s lurched far right, either. Individual justices can be rated ideologically by a bit of math called the Martin-Quinn score.

(NB: Back in 2003, shortly after they published their paper using Markov Chain Monte Carlo regression [3], I had some brief correspondence with Kevin Quinn about the MCMCpack package in R. I was doing something similar in genomics at the time. He came off as quite competent, collegial, and affable to me. If you think that biases my opinion in Martin & Quinn’s favor, feel free to think that.)

As you can see here, Kavanaugh is likely to be the median justice now, despicable as he may be. The Supremes are just that highly right-wing biased nowadays!

In fact, about half of the ideologically polarized opinions were written by 2 of the court’s most extreme right-wingers: Alito (21%) and Thomas (29%). That’s the polluted far-right source of new nudges to our law.

Ok, but does that resonate personally: do I as a progressive liberal feel that way, when confronted with a list of this term’s SCOTUS decisions? To find out, we peruse the helpful list of major decisions this term by Liptak & Kao at the NYT. [4] Let’s go over them and register a personal reaction to each one negative, neutral, good: AARGH/MEH/YAY.

So out of 14 cases important enough to be summarized by the Times, we got:

If I give them the benefit of the doubt on the Native American thing (where I’m just ignorant), then it’s about 50% evil and stupid decisions.

That’s… breathtaking. Especially so when we consider the degree to which these bad decisions were almost all the result of the conservative bloc taking away fundamental rights.

But: is my concern here just the general result of the cases, or is it specifically due to the conservative bloc votes?

We can look at that too, with a crosstabulation of YAY/MEH/AARGH assessments with whether the case was conservative bloc, split decision, or unanimous. (There can be no liberal bloc, since they’re a decided minority.) That leads to the following 3x3 crosstabulation and Fisher exact test in R:

So, yeah: I’m steamed about those Team Evil bloc votes. (You can, of course, argue that this result is more about me than about any objective merits of policy. That’s fine; at least I know what I’m mad about and I’m consistent about that anger.)

Time to eliminate the filibuster, expand the court, and maybe impeach a few of the more problematic justices. Thomas, with his compromised ethical position comes to mind: why should he sit on the court when his wife is an activist in the matters before him?

Esteemed med-chem blogger Derek Lowe weighed in on the July 4th weekend about our increasingly tribal identities in the US. [5] (Plus, extra special bonus points for recognizing and applying Russel’s paradox to the problem!)

He describes his tribal identity at first humorously, and then:

I’m white, I’m male, I just reached the 60-and-over demographic, I used to often vote Republican but don’t see how I can ever do that again, I don’t think that the last election was stolen. And so on. That’s where the arguing starts.

(Yeah, I grew up Republican, too. But it’s possible to get over that and get better. I promise, life gets better afterward.) 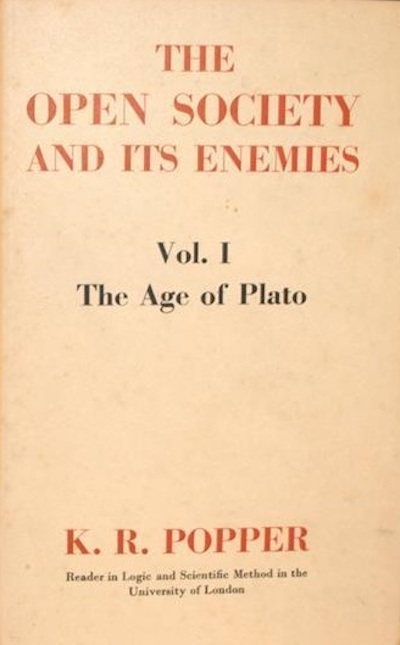 My reflex is to try to argue from evidence, which can be kind of annoying to people around me, because forty years or so of studying and practicing in science has made me deal with most every new thing that comes up by first saying to myself “Hmm. I wonder if that’s true?” and then deciding how much weight to give it (or how much time to invest in deciding that!)

Yes, we have a sense of foreboding, because the conservatives are spreading fascism, or in Lowe’s words, “poisonous garbage”. We must, following Karl Popper’s terminology from the Open Society [6], be intolerant of intolerance.

1: D Ignatius, “Nearly every American has a foreboding the country they love is losing its way”, Washington Post, 2022-Jul-03. ↩