SARS-CoV2 Cryptic Sequences in NYC Wastewater: Why Not to Sleep Well at Night

As long as we’ve got our heads in the sewers, what else is happening with wastewater SARS-CoV2 analyses? It turns out, New York City rather alarmingly has some “cryptic sequences” not yet observed in humans. This is how the virus is scheming to throw another wave at us.

We’ve been saying for a while now (3 years into a global pandemic!) that the unvaccinated pose various dangers:

Turns out it’s even worse than that.

Every day that we drag our feet, bungling global vaccination with glacial speed, the SARS-CoV2 virus is mutating, moving into other animals (“reverse zoönosis”), mutating some more, and getting poised for a return to humans of yet another variant (“zoönosis”). 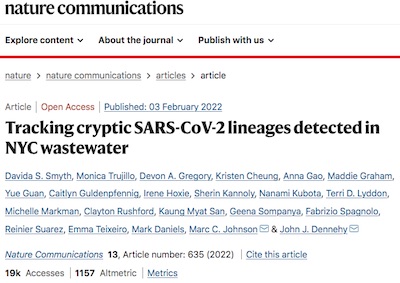 Last Friday came news, via a publication by DS Smyth and 20 co-authors (the corresponding authors are MC Johnson and JJ Dennehy). Writing in Nature Communications, they tell us just how bad that problem is becoming. [1] (Keep in mind that NYC is rather heavily vaccinated and boosted; you should expect the picture painted below to be much worse in the red states where vaccination has been resisted.)

In today’s Weekend Journal Club, we’ll go through their paper and see what’s what.

What they looked at

There’s a lot here about their methods: what instruments (iSeq and MiSeq), what primers (in the Supplement), what software for NGS assembly, how to build lentiviral expression constructs for the cryptic RBDs, how to make pseudoviridions for testing infection… Yadda, yadda, yadda – lots of fun was had in the lab. I didn’t read it closely, but as a person who used to know a thing or two about bioinformatics it looked more or less reasonable. I’m quite certain the Nature referees did take a close look, so let’s just trust them and look at the results. 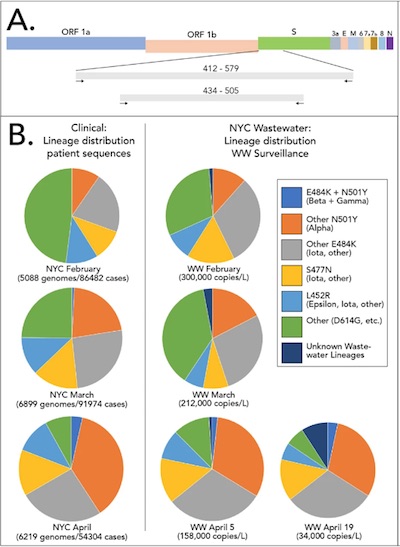 Here in Figure 1A they show us which parts of the viral genome they sequenced for. It’s all in the S gene (for the spike protein), and in particular the RBD. There were 2 versions done in the study: a short one from 435 - 505 done on an iSeq and later a longer one from 412 - 579 done on a MiSeq. (No samples were processed by both instruments as a bridging study, but at least both saw the same constellation of mutations.)

Conclusion: The wastewater signal appears to correlate with the clinical levels of viral variants, e.g., the rise of Alpha. It also tells us there’s a lot more going on, with new variants out there somewhere, but not showing up in clinical sequences! 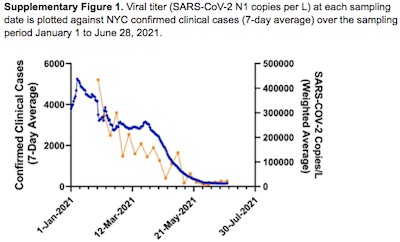 We might also wonder if the signal they’re extracting from wastewater tracks the level of cases in the pandemic. If not, then they might be measuring noise or something else, but it’s not clinically relevant. If so, then they’re onto something.

That’s the subject of Supplement Figure 1 shown here (inexplicably banished to the supplementary material, in keeping with modern tradition where All the Good Stuff is in the supplement). Here we see the time track over the first half of 2021 of the wastewater viral titer (flow weighted across all the WWTF’s in NYC) and the weekly average of confirmed clinical cases. We see that (a) they both tracked nicely together and (b) wasn’t that a great time in the middle of last year when we thought it might be over?

Conclusion: The wastewater signal appears to highly correlated with, and probably related to, medical need.

It would be one thing if they just discovered random mutations all over the place. Then the most likely explanation would be “sample handling”, i.e., RNA is a delicate molecle and shipping it through a sewer is not the best way to preserve the information in it. However:

So what? If these putative new variants leave humans alone, can we just leave them alone?

Maybe… but the evidence is that they probably won’t leave humans alone! 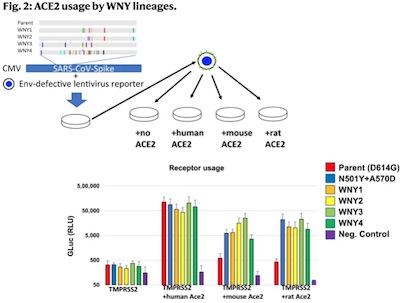 To see if these lineages matter, they constructed some transduction-competent lentiviral pseudoviruses (i.e., artificial and largely safe viruses, but which make cells express the cryptic variant of the spike protein). Then they exposed cells with human, rat, and mouse ACE2 receptors (the SARS-CoV2 target) and saw how well they bound. The result is shown here in Figure 2: while the original SARS-CoV2 is not interested in mice or rats, these new ones bind to mouse and rat ACE2 quite handily. The result is statistically significant by a 2-way ANOVA ($F$ = 17.81, df = 3, $p \lt 10^{-4}$).

Now some SARS-CoV2 variants, like Beta and Gamma, have also learned to infect rats and mice. So this isn’t completely convincing evidence that the cryptic sequences are from mice and rats, but it’s consistent with that.

Whatever species does this, it has to do 4 things:

They didn’t conclude this, being cautious, but rats are starting to look like a pretty good target population to me. Relatively few people would object to an urban rat elimination program, too. There would be little political opposition: while many conservative politicians are rats, most rats are not politicians.

So there’s at least some evidence of reverse zoönosis from human to rat, which presages another zoönosis from rat back to human, with yet another variant.

It would be nice to avoid that, no?

Conclusion: The cryptic variants are consistent with mutations acquired to infect rats and mice. (However, Beta and Gamma can do that too, so we can’t go further than “consistent with”.) 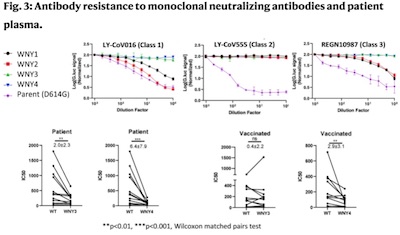 Still… even if these cryptic sequences indicate a new variant-to-be, if we have effective treatments that might not matter much, right?

This paper was submitted before paxlovid and molnupiravir, so we can’t say much about those. (Other than my personal opinion that they’re likely to be effective, since they target things vastly different from the spike protein RBD.) On the other hand, our stock of monoclonal antibodies might be impacted!

So: they looked at how cells infected (presumably with their constructed pseudoviruses) reacted to the monoclonal abs available in mid-2021. (NB: this is well before Omicron, and the only monoclonal effective against Omicron, sotrovimab, was not available then.)

They tested 4 cryptic variants, dubbed WNY 1-4, and a putative parental version of SARS-CoV2, the D614G variant. These were exposed to cells and then tested with 3 therapeutic antibodies: LY-CoV016 (etesevimab), LY-CoV555 (bamlanivimab), and REGN10987 (imdevimab). These span the 3 classes of monoclonals then available, based on ther binding characteristics.

The results are shown in the top row of Figure 3. The horizontal axis is concentration, and the vertical axis is a luminance signal from an assay, where lower values indicate lower values of virus. What you want ot see is a curve that goes down with antibody concentration, i.e., the antibody is driving out the virus. The curve to compare with is the purple curve, which is the putative parental lineage D614G.

Conclusion: The monoclonals typically available in the first half of 2021 are likely to show anywhere from reduced efficacy to no efficacy at all against the cryptic variants. However, sotrovimab, the only remaining monoclonal against Omicron, was not tested as it was not available then.

In the bottom half of Figure 3, they compared the effect of human convalescent serum. This is more broadly sensitive to the virus, not just the spike protein and not just the RBD. The picture here was a little better: 3 out of 4 cryptic variants showed sensitivity.

Conclusion: Human convalescent serum still showed some protective effect. But in order to get this protection, you either must have had COVID-19 yourself, or receive serum from somebody who has. Either way, somebody had to get sick in a truly unfortunate way.

So… the virus is apparently lurking in animal populations, mutating away, ready to launch another variant against which at least some of our therapies won’t work. This is very bad news to anybody who’s unvaccinated, and pretty bad news to the rest of us that we haven’t vaccinated fast enough to stop this evil nonsense.

Ok, so what have we learned in today’s Weekend Journal Club?

You may think you’re done with COVID-19. And in the sense of a psychological event occuring in your mind, that may indeed be the case. But: COVID-19 is not done with you! SARS-CoV2 is out there, spreading into animal reservoirs and the unvaccinated, mutating to become even more infectious… and that’s the next wave.

How long can this go on? As we’ve seen previously: if we do nothing, as Republicans in the US insist, then 20,000 years is not out of the question. That’s how long the ancient coronavirus in Asia took to burn itself out. It left permanent marks on the human genome, until everybody who didn’t have resistance mutations was dead.

I would like to offer up my mild preference that we not do that. Getting vaccinated and boosted immediately is a good first step. We’ll probably need annual boosters at this point. Because we’ve dragged our feet so much catering to unvaccinated knuckleheads and being slow about helping the developing world, we now have highly infectious variants like Omicron, and cryptic variants in animals near us.

It might take a generation of annual boosters to stomp that out. A generation is better than 20,000 years.

Today Katelyn Jetelina, writing at Your Local Epidemiologist, posted a nice survey of wastewater surveillance efforts across the US. [3]

Amusingly, it appears an editor at Nature may have forced a change from “wastewater treatement facility” (WWTF) to “wastewater treatment plant” (WWTP), because of the obvious “WTF” jest. But they didn’t catch all instances of WWTF in the paper, which looks like passive resistance on the part of the authors to leave in this little jape.

To which we can only respond, &Gammad;ΤΦ? ↩