How long can COVID-19 go on? If you answered less than $O(10^4)$ years until everyone with susceptible genes is dead… well, think again.

How long can a pandemic go on, really?

We are now starting our 3rd year of a global pandemic. Everybody’s tired of it. Everybody wants it to end so we can move on. How much longer, really, can that possibly take?

It’s just come to my attention that last summer there was a pretty disturbing paper in Current Biology by Souilmi, et al. on an ancient pandemic, also very likely a coronavirus. [1] We’ll go through it in some detail below, paying attention to their methods, but the conclusion is stark: around 20,000 to 25,000 years ago in East Asia, there was a coronavirus epidemic that lasted long enough to leave a genetic imprint on the human population. It lasted around 20,000 years, stopping only when all those with susceptible genes were dead.

Maybe we should try to avoid that? 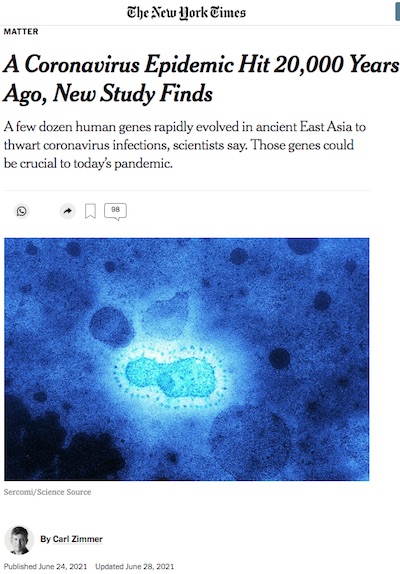 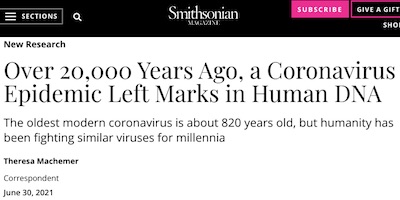 If you don’t want to read a full-up scientific paper, or for that matter my summary of it, you can look through popular media summaries. You probably know that here at Chez Weekend we take a dour view of the popular media’s attempt report science; it’s usually mangled beyond all recognition.

However, we’ve found 4 articles which, after reading the actual paper, seem not to have mangled anything too badly (though they all do leave out a lot!). 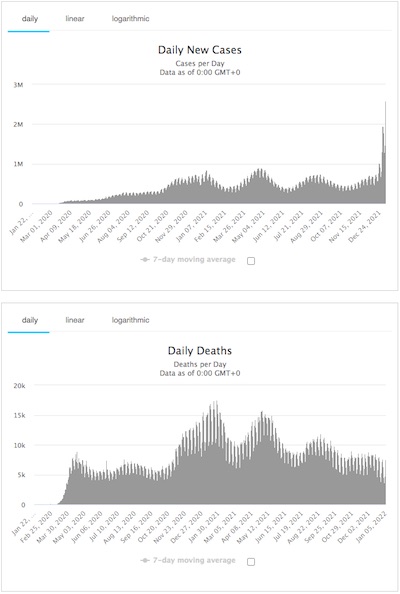 There are 7 coronaviruses that regularly infect humans.

Worse, there is now profound evidence that SARS-CoV2 has infected many wild, farmed, and domesticated animals. That means it can come back by another zoönotic transfer at any time. [8]

This naturally and rather pointedly raises the question: how much longer can this go on?

A look back in deep time 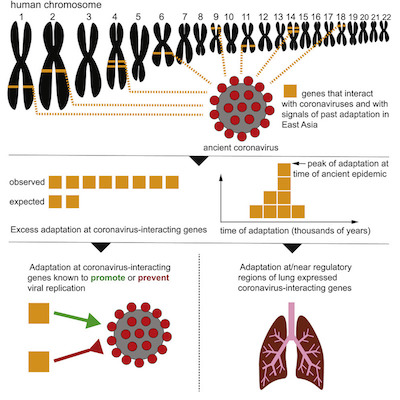 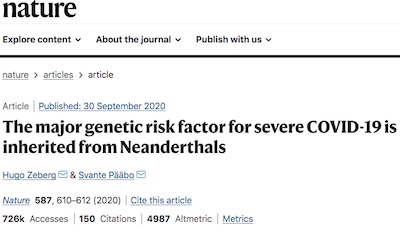 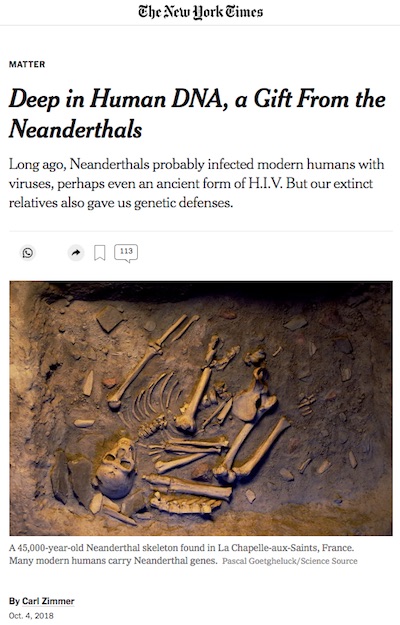 In the paper we’re doing today in Weekend Journal Club, Souilmi and co-authors attempt to answer this question by loooking at deep time: if this has happened in the past, is there evidence left in the human genome of viruses forcing us to evolve in response?

It’s a bit of a complicated story. Fortunately, the authors supply us with a “graphical abstract” shown here (click to embiggen).

The amazing result is that they found evidence of a coronavirus pandemic in the deep past, in a single population (isolated because it was, after all, the Stone Age), whose modern day descendants carry with them their evolutionary adaptations to coronaviruses.

A summary of (some of) their results

First, let’s look at how they pored over human gene pools in various ethnic and geographic groups. They did a sweep across the VIP genes, looking for statistically significant enrichment of the exact same mutation in group samples. They estimated statistical significance by comparing to a block-randomized genome (adjusted for confounders) to get an idea of the False Positive Rate, and then got a final $p$-value by bootstrap. They also did a Gene Ontology enrichment to reject instances explained by phenomena other than viral interactions.

The result is shown here in Figure 1 (click to embiggen).

The next question: when did this happen?

The first constraint is that the methods used here have limited sensitivity to genetic events more than 30,000 years ago. So that’s an upper limit to how far back we’re looking.

They used a variety of methods to hone in more precisely: Ancestral Recombination Graphs, localization of the mutations near regulatory eQTL (expression quantitative trait loci), and so on. We won’t drag through the details here, except to note that the significance thresholds were impressive (iSAFE proximity test $p \lt 10^{-9}$, each VIP gene with ARG $p \lt 10^{-3}$, and so on).

The result was that there were 42 VIP genes showing adaptation clustered around 870$\pm$200 generations ago. Their Figure 2 shown here (click to embiggen) shows the time of adapatation of the coronavirus VIP genes (pink) clusters somewhere 770 – 970 generations ago, and that this is much more than all other genes in the genome (blue) have done. This excess is statistically significant at $p \lt 2.3 \times 10^{-4}$. 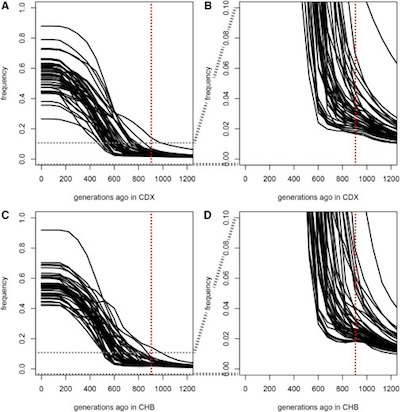 You can see the same thing happening if you look at individual genes, and ask when individual allele frequencies started to rise, i.e., when they start to appear in a large fraction of the population. This is their Figure 3, reproduced here (click to embiggen).

For a variety of reasons, people use a generation time of 28 years per generation [11], so we’re looking at about 25,000 years ago. That becomes even more interesting when we note that coronaviruses themselves only evolved as a species at about the same time, namely an estimated 23,000 years ago! [12] Coronaviruses almost immediately jumped to humans upon emerging as a distinct viral species; this will happen again and again and again and…

Conclusion: We’ll let the authors say it themselves:

Consequently, our results are consistent with the emergence of a viral epidemic ∼900 generations, or ∼25,000 years (28 years per generation), ago that drove a burst of strong positive selection in East Asia. Selection events starting 900 generations ago clearly predate the estimated split of different East Asian populations included in the 1000 Genomes Project from their shared ancestral population.
…
… [W]e note that the signal is restricted specifically at CoV-VIPs and none of 17 other viruses that we tested exhibit the same temporal clustering.

Right. So we know what happened and when it happend, but how long did it go on killing people?

A rough answer for how long this went on is to look at the previous figure, and note that the allele frequency of the specific mutations in the VIP genes stabilized about 200 generations (about 5,000 years) ago. To get a more sophisticated estimate, the authors looked for coordinated changes in the 42 coronavirus VIP genes, since coordination presumably indicates selective pressure from the virus in common across the 42 VIP genes. The result was consistent with selection until about 5,000 years ago. So for 20,000 years, a coronavirus was selectively killing people in East Asia until all those who didn’t have the resistance mutations were dead.

Note well that figure: Just “riding it out” will take potentially forever. Fortunately, we have more resources than our ancient ancestors. They could only engage in some minor infection-avoiding habits and rely on their genes. We have scientifically validated interventions like masks, social distancing, infection-preventing vaccines, and post-infection therapies like paxlovid.

So, you know the drill by now: Mask. Social distance. Vaccinate. Get paxlovid if you get sick.

The study goes on to do a lot more stuff; indeed this is only about the first half of the paper.

Whew! Let’s recap what we’ve learned, and how that informs what we should do:

Again: Mask. Social distance. Vaccinate. Get paxlovid & fluvoxamine if you get sick. Support research on drugs for the 15 druggable genes above.

I know you’re tired of doing all that. But how tired would you and your descendants be after 20,000 years of this? Make the smart choice here.

7: WorldOMeter, “COVID_19 Coronavirus Pandemic”, retrieved the morning of 2021-Jan-06. It’s probably a lot more by the time you read this. ↩

That 1.8% lethality rate is really important, and one of the things that has driven my contention that Covid-19 is really just a near miss for the sort of pandemic that really would be bad. But the idea that it’ll be at this level for another 20,000 years is also something to think about. Is what we thought we had – a pandemic lasting for a year or so – actually the near miss, and what we actually have – a pandemic lasting for 20,000 years or so – the real thing?

We don’t know. Extrapolation from 2 years of experience to the next 20,000 years is not for the faint hearted.

Hi, Louise — always good to hear from you.

That 1.8% lethality rate is really important…

Absolutely! It could have been much, much worse. Especially in 2020 when no vaccines were available: if we’d had a virus with the fierce propagation of Omicron and the lethality of MERS, we might have lost 1/3rd of humanity. That’s in the same territory as the Black Plague in Europe.

Extrapolation from 2 years of experience to the next 20,000 years is not for the faint hearted.

But also keep in mind that 20,000 year epidemic was in a Stone Age society with no science, no medicine, no public health. They had only 2 things to protect them: (a) their genes, and (b) their behaviors (superstitious avoidance of ritually unclean things, and a disgust instinct to avoid stuff that looks or smells bad). That’s not nothing, but it’s also not much.

And it’s not our situation.

We now have well-founded NPI’s like proper masks and social distancing. We have vaccines that work amazingly well. We also have really fascinating research in progress on pancoronavirus vaccines that might work across the whole family. A ferritin nanoparticle looks promising, described by Your Local Epidemiologist as like a soccer ball presenting multiple ligands on each face (apparently referring to this Nature article).

So I highlighted the 20,000 year thing as a riposte to the knuckleheads who say we “just have to let it burn through” and get herd immunity the hard way, apparently largely because scientists are a bunch of lefty elitists with no social skills and poor fashion choices. Or something.

All we have to do is make the smart choices here. Which is, surprisingly to me, proving difficult in an environment full of nascent fascists who deny reality itself.

Thanks for the highlight and walk-through. It’s exciting and humbling to see collaborations that are so broad and deep (Mass spec, paleogenomics, virology, epidemiology, evolution) that no one person could synthesize and understand it all. Except John von Neumann, maybe.

Not entirely unrelated, in November the essayist Phillippe Lemoine published his speculation and model of the pandemic, Have we been thinking about the pandemic wrong? The effect of population structure on transmission. The title is adequate explanation of his thesis.

I have not seen other explanations for the simple and basic question, “Why are there cresting and receding waves of SARS-CoV-2 infections?” At the beginning, Everybody Knew there was going to be a sigmoidal curve, the only questions were How Fast and How Big. Tomas Pueyo, March 19, 2020, Coronavirus: The Hammer and the Dance. Influential, representative, and (with hindsight) wrong.

I fixed the hyperlinks for you. (Sorry about that: comments here use Github-Flavored Markdown (GFM), rather than pure HTML. Though you can get away with some HTML, I’ve never bothered to figure out exactly which HTML elements work and which don’t.)

It’s exciting and humbling to see collaborations that are so broad and deep (Mass spec, paleogenomics, virology, epidemiology, evolution) that no one person could synthesize and understand it all. Except John von Neumann, maybe.

A truly amazing set of only vaguely related technologies (mRNA synthesizers, lipid nanocapsules, huge computing and sequencing resources, drugs like paxlovid…) all came to fruition at the exact right moment. The religious part of me wants to search for divine influence, while the skeptical part of me just notes that of course we use all the tools that come to hand. One lesson is that new knowledge is never wasted: sooner or later, we’ll need it, so we better be able to look it up when the need is upon us.

Re von Neumann: Because of my history I was also bombarded with stories of his contemporaries, most relevantly in this case Norbert Wiener and Enrico Fermi.

And thanks for the suggested readings; they’re in my queue.