Why did Republicans block a Trump impeachment guilty verdict?

It’s been a couple weeks, so we’ve all calmed down a little. But still… why did 43 Republican senators vote to block the obvious guilty verdict in Trump’s impeachment? 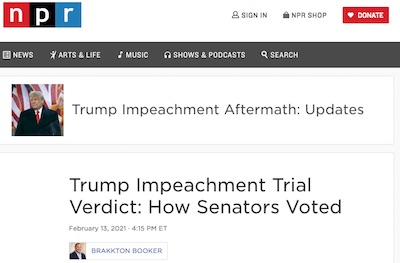 The Senate has voted: 57 guilty, 43 not guilty. [1] While that’s a bipartisan supermajority for the guilty vote, it’s not sufficient: 67 guilty votes were needed (or 15 guilty-voting Republican senators would have had to go stand in the lobby for a few minutes). The facts in evidence were brutally clear. All 50 Democrats and 7 Republicans acknowledged this. So that raises the question: what were the other 43 Republican senators thinking?!

At some level, I’d like to get inside their heads to understand their thinking. They had to have some way of rationalizing their vote against the facts, perhaps prioritizing political expediency. Was it fear of public retaliation from Trump in the media? Fear of their Trump-addled constituents? Fear of being primaried by some QAnon far to their right in an upcoming reelection campaign? Fear of insufficient tribal loyalty to the Republican tribe?

It could be any of those things, or all in combination. And upon reflection, I really don’t want to “get inside their heads”, because I wouldn’t like what I would find. I’ll leave narrated trips through hell to professionals like Dante, and to his modern admirers, like Niven & Pournelle.

Basically, we just elaborate the fears enumerated above, in technical ways that we can actually test statistically:

Most importantly, we want more than just talk, much more than just story. We want actual statistial evidence for or against these hypotheses. For that, we need data.

Here’s the data we used: 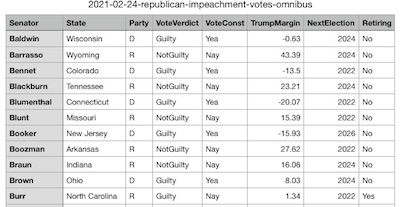 Now, that’s a lot of data sources, and a lot of careful hand manipulation to assemble them in useful form. So, to facilitate peer review, we’ve written our analysis script [10] to assemble all of them into a single, omnibus, tab-separated-value formatted text file [11]. That’s suitable for import into a spreadsheet, or any other analysis tool for peer review of this analysis.

First, let’s look at some crosstabulations to see if there are any interesting hypotheses to explain the VoteVerdict column from the others.

The same is pretty much true of the final decision in VoteVerdict:

And the correlation between VoteConst and VoteVerdict is of course darn near perfect, since you wouldn’t vote Guilty in a procedure you thought was constitutional:

If we dig into the changes, we see that just 1 vote changed between the 2, and it was Senator Burr of North Carolina who is interestingly going to retire in 2022. In news interviews, he said the Democrats changed his mind when the impeachment managers presented such a damning case:

Finally, what about retirements? There are so few, it’s kind of hard to say there’s anything meaningful going on here: 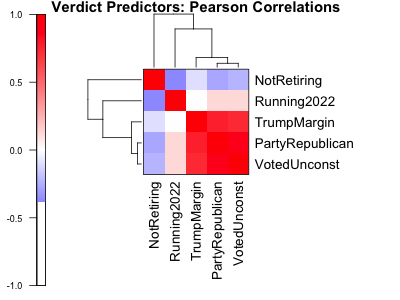 Finally, we might ask how many independent predictors do we really have here, anyway? It certainly looks like some of them are heavily correlated! After turning all of them into numeric variables (turn votes into booleans, and thence into 0/1), we can calculate the Pearson correlations, as shown.

It looks like there’s 1 block of TrumpMargin, PartyRepublican, and VotedUnconst that are heavily correlated. This makes sense, and is really just an expression of party identity.

NotRetiring and Running2022 are less correlated with that block, and anti-correlated with each other. If I converted to NotRetiring to Retiring, then they’d be correlated: everybody retiring was going to have to run in 2022. So that makes sense, too.

Basically, it looks like there are maybe 2 independent predictors here? Or maybe just 1, if we flip the sign of NotRetiring and note that Running2022 is mildly positively correlated with the “Trumpy block” of variables.

The crosstabulations were not especially encouraging in the quest for explanations beyond brute-force party identity. Still, let’s press forward. We’ll qualify each of the columns that might predict VoteVerdict in a univariate regression model. For example, for the predictor TrumpMargin, we do:

We’ll report the $p$-value for statistial significance of the $\beta_1$ coefficient, for all senators and for just the Republican senators. Then we’ll do a Benjamini-Höchberg multiple hypothesis correction to get the False Discovery Rate. A small(ish) FDR presages that column as a good predictor. The results are intriguing:

According to this analysis, the only variable worth considering is TrumpMargin. It’s understandable: Trumpy voters elect Trump, and also elect Trumpy senators who will defend Trump. Not very satisfying, but understandable.

(And I don’t understand why PartyRepublican wasn’t a good predictor?! Might be something wrong there…)

It might be that the other features taken together will predict a bit more, so let’s move on to multivariate model. Here we’ll be using the redoubtable glmnet package [12], which will handle the multivarite logistic regression, LASSO regulation to impose an L1 penalty on model complexity (“choose the simplest model that’s adequately predictive”) and 3-fold crossvalidation to estimate out-of-sample predictivity.

Here’s how that works in broad, schematic outline:

(There’s a lot more to know, but those are the high points.)

We then get a model which performs reasonably on the witheld test data, and which has the smallest number of parameters that is reasonably plausible. (Hastie adds a heuristic: find the best-predicting model, then choose an even simpler model whose crossvalidated error rate is within 1 standard error of the optimum. I.e., choose the simplest thing that’s statistically indistinguishable from the best. We won’t be bothering with that, for reasons you’ll see below.)

So let’s see what we can get! 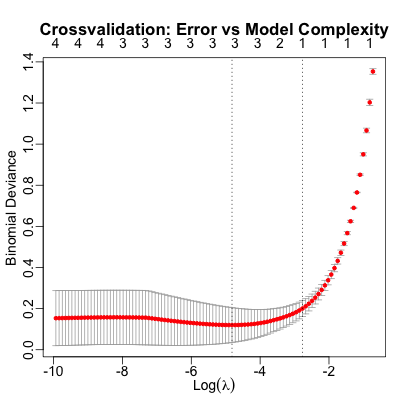 This shows the error in the predictions made (“binomial deviance”) as a function of model complexity. The numbers along the top show the number of variables used in making the prediction, with the simpler models on the right. The error bars around the red dots show the variation across the rounds of crossvalidation. The 2 vertical dotted lines show the best-predicting model, and Hastie’s simpler but statistically indistinguishable from best heuristic.

The best model uses 3 variables to predict the final verdict vote: the constitutionality vote, the Trump margin in a senator’s state, and whether the senator is retiring. Intriguingly, while TrumpMargin is the best single predictor, it is eclipsed by the other 2 in a multivariate model:

The simpler model chosen by the Hastie heuristic uses the constitutionality vote alone.

99% correct means we missed only 1 senator’s vote. A bit of digging reveals that it was Burr, who changed his mind between the constitutionality vote and the verdict vote. 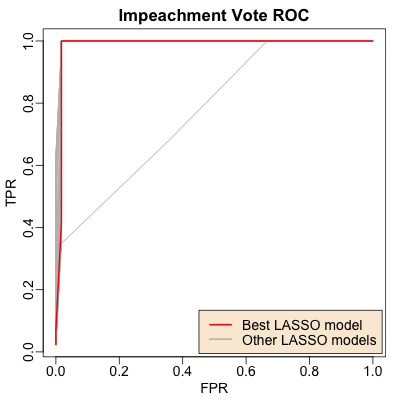 Finally, the Receiver Operating Characteristic curve (ROC curve) here shows the True Positive rate vs the False Positive Rate. The red curve is for the best model, and the gray curves are for the other models tested with different subsets of predictors. Normally, we’d use this curve to set a threshold on $\Pr(\mathrm{Guilty})$ to make an actual up-or-down Guilty prediction, so we could understand the tradeoffs between True Postive Rates (don’t miss any Guilty votes) vs False Positive Rate (don’t over-predict Guilty votes). But as you can see here, it’s near-perfect: party identity as expressed in the constitutionality vote predicts all. (Except, of course, Burr. Bless his little heart.)

Thinking about the results

So what does it all mean?!

I was hoping for some kind of deep understanding of the pressures on senators: Trumpy constituents, reelection schedules, retirements, party identity, and so on. But it turns out those are all pretty correlated, and we have just a story about party identity:

There’s probably not much more here than that. We took a long time to find such a simple thing, no? As James Branch Cabell described the work of a bizarre bard in Music from Behind the Moon, one of the best short stories I’ve ever read, our song “ran confusedly, shuddering to an uncertain end”. [13]