So. US politics: it seems The Creature is being impeached. Again. What can we do to make sure the impeachment makes a difference this time? 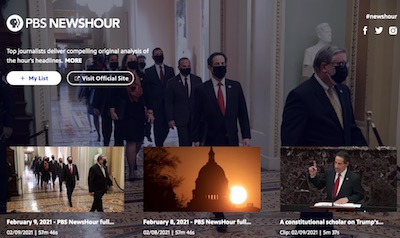 Normally I love to listen to the news on NPR, or even watch the PBS News Hour. But now, I just can’t: it’s all Trump impeachment, all the time. The Democratic arguments are horrifying memories of a traumatic time; the Republican arguments are delusional, sociopathic, or fascist like the man they’re defending. I just want Trumpism to be irrelevant, and for government to be at least mostly rational.

Still… I can’t ignore it. It matters. 3 reasons:

How many Republican senators have to vote for conviction

In order to get conviction, the US constitution requires a 2/3 supermajority of the senators then present (Article 1, section 3, paragraph 6 [1]). There are 2 ways this can happen:

(NB: Of course, a mixture of these paths could occur. Say, 50 Democrats + 10 Republicans = 60 senators vote for conviction. Then that’s 2/3 of 90. So only 10 Republicans need to find urgent business out of the chamber, while the rest can be present and vote to acquit.

Those 3 groups add up to 100 senators, and the conviction votes are 2/3 of those present. We can easily generate a table with a tiny bit of R to verify this numerically and see all the examples:

I’m too angry and disgusted with the GOP to see much hope that either of those ways will happen. They both require getting into the heads of Republican senators, knowing what moves them, what drives them, and what persuades them.

What drives them and how you can push a little

What persuades them is constituents. They want to know what the voters in their state think, how likely they are to be primaried or how likely to be re-elected. (There are other influences, like party whip instructions, campaign funding, and so on.)

So: should you find yourself so unfortunate as to be the constituent of a Republican senator (particularly one that is retiring or not immediately up for re-election in 2022 and hence not under immediate political pressure to appear Trumpy), you should call them and politely tell the staffer who answers that you want your senator to vote for conviction in the impeachment trial. It doesn’t matter if you think your senator is a nimrod who won’t listen; the point is that if enough of their own constituents call saying this, it will create a moment of doubt in which the right choice might be made. (But please don’t bother any senator of whom you are not a constituent.)

So the question is: how to contact them, and how to speak effectively so the staffer will start counting up pro-impeachment-conviction constituents? 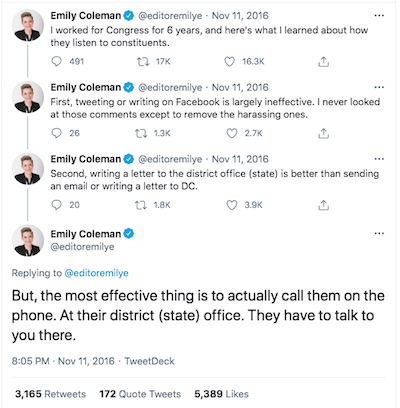 Emily Coleman, a former Congressional staffer, offered some advice on Twitter a couple years ago: 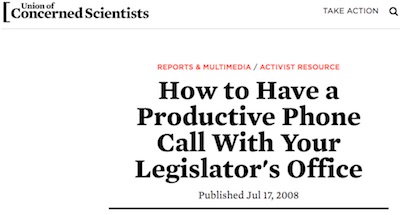 Similar material from 2008 by the Union of Concerned Scientists [2] (hey, remember my tribe) also suggests calling. But in cases like this where it’s about an imminent vote, definitely call the DC office. Ask to speak to the aide who handles informing your senator about constituent opinions on impeachment. If that’s complicated, just speak with whomever it is that answers the phone, as the call will be logged in the constituent database system either way. Let them know you are a constituent, and are registered to vote. They may ask your name, address, and zip code. Know your facts, and be brief. [3]

So, there it is: if you are a constituent of a Republican senator (especially one retiring or not immediately up for re-election in 2022), call their DC office and tell the aide you are a constituent and a registered voter who wants a vote to convict Trump in the impeachment trial. Or that they absent themselves from the chamber during the vote, to lower the conviction threshold.

They will ignore everything else.

Well… that was again unsatisfying, and for about the same reasons. The senate voted 57 guilty, 43 not guilty. The guilty votes included all 50 Democrats and 7 Republicans, for the most bipartisan vote in American history to impeach a president. (Though there are only 4 examples, half of them are Trump.)

Again, best wishes to the prosecutors of the Southern District of New York (for The Creature’s likely tax crimes), the prosecutors in Georgia (for the election overturn attempt), and the prosecutors in DC (for the incitement to insurrection). The last one is the most interesting, as a guilty verdict would, by both statute and the 14th Amendment, trigger a bar from federal or state office. And, of course, prison.

2: Union of Concerned Scientists, “How to Have a Productive Phone Call With Your Legislator’s Office”, UCUSA blog, 2008-Jul-17. ↩

3: A brief email consultation with a current congressional staffer confirms this, at least in broad outline. They also offered a de rigueur cautionary note:

“To change a senator’s mind, though, you need a lot of phone calls. And we know that sometimes the most active constituents do not represent the broader view. But it’s still worth a call, because all calls get logged. And, you know, democracy.”

Loved the computation - although I am still lost in the hearings procedure.

Also, I am always impressed by the concept of calling your representative’s or senator’s office and telling them how to vote. This is something unheard of in certain eastern parts of Europe.

↪︎ Reply to Ana F
Comments for this post are closed.