Reading the RNA in the Pfizer & Moderna vaccines

Have you ever wondered if you could make sense of the RNA code in the Pfizer or Moderna vaccines, if you could just read it? With some help, you can now do exactly that.

Availability of the RNA sequences and what that doesn’t mean

As we reported earlier this month, the RNA sequences for both the Pfizer and Moderna vaccines have been posted on GitHub.

People have said all sorts of damn fool things about RNA vaccines in general, and about this new repository in particular. It is not a recipe for making your own version of the vaccine, since there’s very elaborate chemistry in the lipid nanocapsule, a complex set of buffers and preservatives to make it go into solution in a useful way, and about a squillion other things. It’s a bit like knowing the instruction set of a computer: if you think that makes you able to build a computer, you’re a couple conses shy of a cold load.

While an argument can be made that this is proprietary intellectual property, the counterargument runs that it is (a) an insignificant slice of the total IP necessary to do anything, and (b) all the tricks in it are well-known (by people who know such things).

The goal of this post is for us to become one of the people who know such things.

An explainer piece on the vaccine RNA

Bert Hubert wrote a masterful tutorial [1] last Christmas, explaining the sequence of the Pfizer RNA. Interestingly, he explained (some of) the hacks done to it to make it a better vaccine, not just a copy of the virus RNA. It makes a difference: the raw sequence of the SARS-CoV-2 virus would be terrible as a vaccine.

His explainer is so good, there are multiple video explainers-of-the-explainer available; here are two of them to which Bert himself referred.

You really should read Bert’s piece (about a 20min read). But… since we both know you probably won’t do that, here’s a quick summary. (But really, his explanation is probably better than mine.) 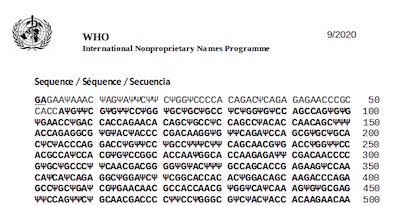 The Pfizer sequence was apparently published by the WHO last September. It looks more or less like this, showing here the first 500 nucleotides of the RNA. There are a total of 4284 nucleotides in the whole thing.

All clear, right? No, of course not, unless you are a ribosome used to reading this sort of thing to make proteins. (If you are an intelligent ribosome who reads my blog, please get in contact. I’d very much like to interview you: you’re either an incredible miracle or someone with an interesting delusion. Possibly both.)

So let’s break down how that sequence works. It turns out it has some degree of modularity, i.e., we can point to bits of it and explain what they, and only they, do.

What’s it all mean?

This bit of RNA has been considerably engineered by Pfizer to optimize for getting past the immune system, optimizing for protein translation speed & amount in several ways, improving the stability of the spike protein away from the rest of the virus, and so on.

Bert has guided us through the weeds to see at least 11 biohacks to do this. Really, go read his piece, since he probably explains things better than me.

What struck me was how much of all this engineering has come to light in just the last couple of years. Enormous preparation on RNA vaccines and knowledge of the previous coronavirus outbreaks (MERS and SARS) meant that we had just exactly the right tools, at the right time, in the right hands.