Interestingly, some Stanford scientists saved a few drops of the Moderna vaccine, apparently ran them through their sequencers, and posted the sequences on GitHub.

Who did what now? 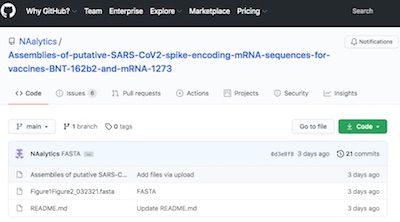 Vice reports [1] that Andrew Fire and Massa Shoura of Stanford saved a few drops of Moderna vaccine from a vial destined for the trash, and apparently sequenced it. While the article uses rash terms like “reverse engineered”, Fire & Shoura are careful to point out that is not the case:

“We didn’t reverse engineer the vaccine. We posted the putative sequence of two synthetic RNA molecules that have become sufficiently prevalent in the general environment of medicine and human biology in 2021,” they told Motherboard in an email. “As the vaccine has been rolling out, these sequences have begun to show up in many different investigational and diagnostic studies. Knowing these sequences and having the ability to differentiate them from other RNAs in analyzing future biomedical data sets is of great utility.”
…
“For this work, RNAs were obtained as discards from the small portions of vaccine doses that remained in vials after immunization; such portions would have been required to be otherwise discarded and were analyzed under FDA authorization for research use,” they said.

They deposited their results [2] on GitHub, a well-known site for project management of open-source software (and the host of this crappy little blog, just so we have full disclosure here).

What should we think about that?

This isn’t the same as posting the well-known sequence for the mRNA of SARS-CoV-2, since the vaccine mRNA has several mutations, a poly-A tail, and other features designed to stabilize it when it’s not attached to the rest of a virus particle.

These specific changes are probably regarded as proprietary by Moderna (and similar ones for Pfizer), so I’m not quite sure how to feel about this. In general I detest the idea of RNA/DNA/gene/protein patents (and don’t even get me started on software patents or business process patents!). But on the other hand, I acknowledge there was signficant work involved in modifying the wild-type viral RNA for the vaccine and that is probably reasonable intellectual property.

Yet it’s not equivalent to a vaccine. There are thousands of other things involved, like the lipid nanocapsule, buffers, solvents, and so on. And that’s not even mentioning the manufacturing know-how. The mRNA sequence is, while scientifically interesting, only the tiniest step of commercializing a vaccine.

So I’m leaning toward thinking this is ok, maybe even a public service.

What do you think?