Somebody asked me about the confidence intervals Pfizer reported for vaccine efficacy in various age groups. Some of them are negative! Are they sensible?

Ok, nobody actually asked me this one. Or maybe I asked myself. I was reading, as is the custom of the people of my tribe, Miles Kimball’s blog, Confessions of a Supply-Side Liberal. [1] Miles pointed to an article by Gary Cornell [2], an apparently semi-retired mathematician who blogs about a mathematician’s eye view of the pandemic. So… sort of kindred souls there, I think.

Now, Gary looked at the FDA re-analysis of the Pfizer data [3], which is what we looked at here a couple days ago, among other things. But unlike your humble Weekend Editor who just picked out the pretty survival plot, Gary actually dug through the tables. Of particular interest is Table 8 on page 26, which gives the subject counts and the vaccine efficacy, and the 95% confidence interval on the efficacy, across various age groups (q.v.).

I applaud this, particularly the last part. As a statistician, or even just a responsibly-behaving scientist, you should never just give people a simple number for whatever quantity is of interest, despite their fervent desire to say “just gimme the number!” Instead, you should also give them some measure of uncertainty: ideally a probability distribution peaked around the simple number, but also a confidence interval will do nicely.

So the second of Gary’s questions can be addressed by looking at the Pfizer vaccine efficacy confidence intervals, and seeing if they inspire confidence. (Answer: both yes and no.) 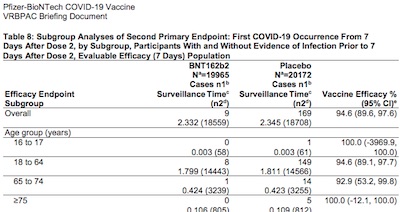 So here’s the relevant extract from Table 8 of the FDA’s reanalysis.

So Pfizer is reporting an overall efficacy of 94.6%, with a confidence interval of 89.6% – 97.6%. That’s a nicely tight confidence interval, i.e., we’re pretty sure the efficacy is quite high. We’re in fact 97.5% sure that it’s above 89.6%, so basically the lower confidence limit is kind of like a worst likely case. If that’s high (as it is here), you can be happy about the result.

But look at some of the other age groups:

Ok, that leads us to ask some questions:

The efficacy is computed (apparently; I’m reverse engineering here!) as follows. First, define the probability of infection, conditional on the arm of the trial:

You might do a point estimate for those based on the number of infections in the arm divided by the total number of subjects in the arm, for example. (But we can do better; see below.)

The the efficacy in percent is:

If we try that, we reproduce the Pfizer table above pretty well:

There’s a teensy difference of 0.1% in row 4, the 65-74 year olds, where we get 92.8% while Pfizer reported 92.9%. I hope that’s because they’re using a more sophisticated method, or maybe they have some patient exlusion criteria not obvious in the report. But basically, we’ve reproduced their estimates of efficacy from the patient counts, or close enough.

Now, what about the confidence intervals? And why are Pfizer’s sometimes mysteriously negative at the lower confidence limit?

Let’s deal with the second question first. The footnote says they’re using the Clopper-Pearson method for binomial confidence intervals, which is more-or-less frequentist method that is reasonably well known (by people who know this sort of thing, at least). However, note that the places where their lower confidence limit goes negative are exactly where the count of infections goes to 0. People who really know Clopper-Pearson (see previous link) know that there’s a special-case exact form to be used in that case, instead of the slightly approximate case used otherwise. That would have given a lower limit of 0%, i.e., no efficacy.

Ok, no real problem statistially; it just says that for the very young and the very old, we do not have evidence of efficacy. That’s not a statistical problem, but it sure is a problem!

Can we do any better?

Without access to the detailed dataset, probably not: this is a type of problem called a “survival problem” best dealt with by Kaplan-Meier estimates, Cox regression, and the like. We don’t have the data for that.

But can we do some rough estimates that might be a bit better? Maybe!

Let’s use the following notation:

Let’s look at those posterior betas, as we did before with more approximate data, and see how what we believe about infection probability differs between treament & control arms.

There’s 1 plot here for each age cohort. The blue curve is the treatment arm, and the black curve is the control arm. The vertical dashed lines are the 95% confidence limits on the probability of infection in each arm; we’d like to see those well separated.

Going down the plots:

But what about efficacies?

Ok, so we’ve modeled the probability of infection in the treatment and control arms with Bayesian posterior Beta distributions. What about efficacies? If you look at equation $\eqref{eq:efficacydefn}$, our definition of efficacy, you see that it takes the ratio of those 2 probabilities. That means our notion of efficacy is now a random varible, which has whatever distribution we get from a ratio of 2 Beta-distributed random variables.

Gotta admit, I’ve never encountered that before. But the problem of ratio distributions in general is pretty gnarly, often leading to fat-tailed monsters. For example, the ratio of 2 normally distributed variables is often a Cauchy-distributed variable: tails so fat the standard deviation isn’t even defined, and hence the Central Limit Theorem does not apply, and… well, all your base are belong to us, or something like that.

The integral looked less than completely amusing, so I did a literature search to see of some other poor schmuck had to do it first (always a good research technique). And it turns out this has all been worked out by Pham-Gia [4]… but the paper is paywalled and costs $51 to read! I suppose I could write to him and ask for a copy of this 20-year-old paper, but that’s too annoying.

Then it turned out that Saffer also had this problem, got hold of the Pham-Gia paper somehow, and wrote some software in a GitHub repository. [5] But… the quoted result is rather complex, invovling both Beta functions and hypergeometric functions:

…and as I believe I’ve mentioned before, your humble Weekend Editor is still working through some childhood trauma around hypergeometric functions like ${}_{2}F_{1}()$. So… not gonna go there either.

So Pfizer did ok. They didn’t use the methods I would have (and even I should use the analytic solution of Pham-Gia and Saffer to avoid the stupid negative LCL for the 16-17 cohort). But we generally agree: overall good result, good result in 18-64, marginal result in 65-74, no evidence of efficacy in 75+, and the 16-17 cohort is a joke that should have been removed.

So what does that mean?

Some of our results:

The R script for this analysis is downloadable here [6], because here at Chez Weekend we believe in peer review.

1: Disclosure: once upon a time, a long time ago, when Miles were nought but a wee undergrad, I knew him slightly through our religious community. I knew his older brother slightly more, but… yeah, I kind of liked him back in the day. He’s matured well, and that’s why I read his blog. ↩