As you may have heard, the US is about to face an election more contentious than any since the Civil War. With vote counting likely drawn out due to right-wing mischief at, for example, the Post Office, what are we to make of partial returns as far as predicting the outcome? And will there be zombies? 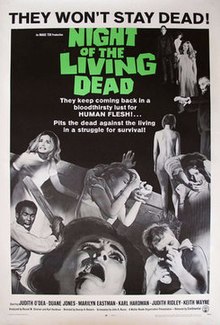 Imagine we lived in a simplified, and and much more desireable, world:

So here we are on election night, anxiously listening to the returns (on NPR or PBS, of course, since we’re GoodGuys — though the BBC and the Guardian get honorable mention). Out of $N$ ballots to be counted, just $n < N$ have been counted so far. They add up to $k < n$ votes for GoodGuy.

What should we predict about the final outcome from this partial information?

With the exception of the last question, for which the answer is apparently and unfortunately a hard “no”, the other questions can be addressed probabilistically.

Meet your new best friend, the beta-binomial distribution, which, as from its name [1], combines features from:

If we somehow knew the probability $p$ of individuals voting GoodGuy, then the total GoodGuy votes would be binomially distributed:

But we don’t know $p$. We do have a sample of $n$ votes, $k$ of them for GoodGuy. A frequentist might plug in the point estimate $p = k/n$ and be done with it. That’s not bad, but we can do better: we can use Bayesian methods to get a posterior distribution for $p$, thereby capturing our knowledge gleaned from $(n, k)$ observations, and our remaining uncertainty.

Mash them together in Bayes’ rule, and note that the result is a beta distribution: 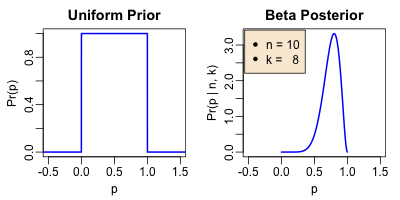 where $B(k+1, n-k+1)$ is the normalization integral, our old college buddy from freshman year, the complete beta function. This distribution is a beta distribution of the first kind, with the parameters in the usual notation being $\alpha = k+1$ and $\beta = n-k+1$. [2] [3] The figure illustrates an example with $n = 10$ and $k = 8$, e.g., if you flip a coin 10 times and it comes up heads 8 times, what should you believe about the probability $p$ of flipping heads?

The beta-binomial distribution combines these: pick a value for $p$ from a beta distribution, then draw binomial samples using that $p$. It just wraps all of that process up into a single distribution function:

where we’ve conveniently written everything in terms of the complete beta function.

The probability of a win is the cumulative distribution function,

That can be written in terms of the generalized hypergeometric function ${}_{3}F_{2}()$, but that’s likely more trouble than it’s worth. [4]

There are loads of papers, and implemented algorithms, for doing beta binomial parameter estimation (e.g., references 5-7). However, here we don’t actually have multiple samples from a beta binomial with which to work; we have one sample in the form of the two numbers $(n, k)$. So we pulled a swift one above: we chose the beta binomial parameters $\alpha$ and $\beta$ so that the binomial part of it best reflects the $(n, k)$ observed. This is sort of a poor man’s maximum likelihood.

As with so many things when working in R, someone has beaten me to it: the TailRank package (reference 8) already implements the beta binomial distribution, its cumulative distribution, and many other things. That’s the nice thing about working in a language with a vibrant user community: other people largely write your software for you. (reference 9) 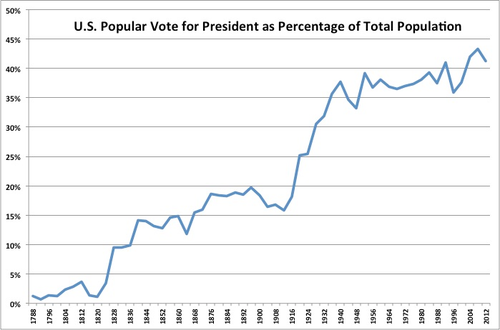 The US currently has a population of about 328 million. How many of those can be expected to vote? According to Wikipedia on US voter turnout in US presidential elections, about 40% – 42% in the recent past. A turnout of 45% of the population (a higher fraction of eligible voters) would be a new record. So let’s go with 45%.

…and why it’s not so practical

There are a number of infelicities in models like this. Among them are the 2 that are tricking us into over-confidence: 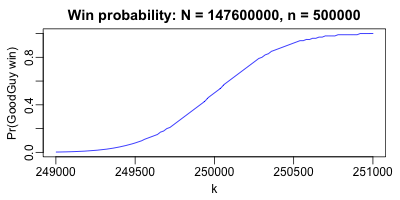 To illustrate this, consider the same problem above ($N$ = 45% of 328 million votes to be cast, $n$ = 500,000 already counted) but now vary the number of already counted GoodGuy votes $k$ from 249,000 to 251,000. This is clearly a very small variation. But note in the figure that the probability of a GoodGuy win goes from nearly 0 to nearly 1! Moving just 1000 votes either way makes the model swing wildly in its prediction. Over the course of election night, as the tallies vary, our predictions would swing wildly back and forth.

Conclusion: We’ve had a lot of fun here, and for nerdly types like your humble Weekend Editor this is a good anxiety relieving process. But we’ve modeled an over-simplified world. Our model has failed to be believably predictive.

The sad facts: There are more than 2 candidates in most jurisdictions, and thus a significant spoiler effect (Ralph Nader in 2000, anyone?). There is, sadly, an Electoral College and it severely biases voting in the US towards Republicans representing rural, sparsely populated, conservative districts. The backup for the Electoral College, voting in the House of Representatives, is also biased: each state gets 1 vote, again over-representing rural conservative states. The red mirage/blue shift is a real thing. The candidate elected seldom gets a majority (though some states are now experimenting with rank-preference voting mechanisms of various sorts, which would help). It’s important to enumerate your assumptions, as we did at the outset, so later you can see if they’ve steered you wrong.

So… hang on. There may yet be zombies.

1: As they say in Japan: “名は体を表す” (na wa tai o arawasu), or “names reveal the inner nature of things”. In equally pretentious Latin, nomen omen est. This is, of course, strictly false; but it is occasionally useful for pretending one knows whereof one speaks. ↩

2: In particular, a $B(1, 1)$ distribution is just the uniform distribution, so it’s betas all the way across the board. ↩

3: Binomial and beta are conjugate priors: if you observe $k$ out of $n$ binomially-distributed samples, then the beta distribution tells you what to believe about the underlying $p$ that generated those votes. Heckerman’s Bayesian tutorial (reference 4), for example, explores this in a tutorial way, with a coin-toss example to estimate how the coin is loaded.↩

4: Your humble Weekend Editor is still working through some childhood trauma around early exposure to hypergeometric functions. ↩

Oh man - I’ve not thought of beta binomials since surprisingly far back into the previous century! Perhaps the last millenium, even. :)

But yeah, the beta binomial feels like that scary girl we all (okay, most of us) once had a date with. Once. And we’ve totally forgotten about her and the way we weren’t quite sure if she actually liked us or was planning to murder us and distribute our body parts in dumpsters around the city. Then we see her behind the counter at…wait - what were we talking about?

But thanks for this - it brought back some old memories of another life!

And remember, as George Box said, “All models are wrong. But some are useful.” (I bet this would look great in Latin…)

↪︎ Reply to David Pablo Cohn
Comments for this post are closed.