Petrov Day #39: Again Celebrating the Day the World Did NOT End

Today the world still did not end, for the 39th time in a row.

These days, we don’t think of Russians as heroes. And there’s good evidence for that belief: the invasion of Ukraine, calling Ukrainians Nazis, the disinformation campaigns in US politics, the beatings of their citizens, the politicians and business folk dying of Tall Building Syndrome, the nuclear weapon threats, and so on.

But once in a while, it’s worth remembering one’s adversaries are people. And occasionally heroic people, at that.

The hero we remember today is Stanislav Petrov: 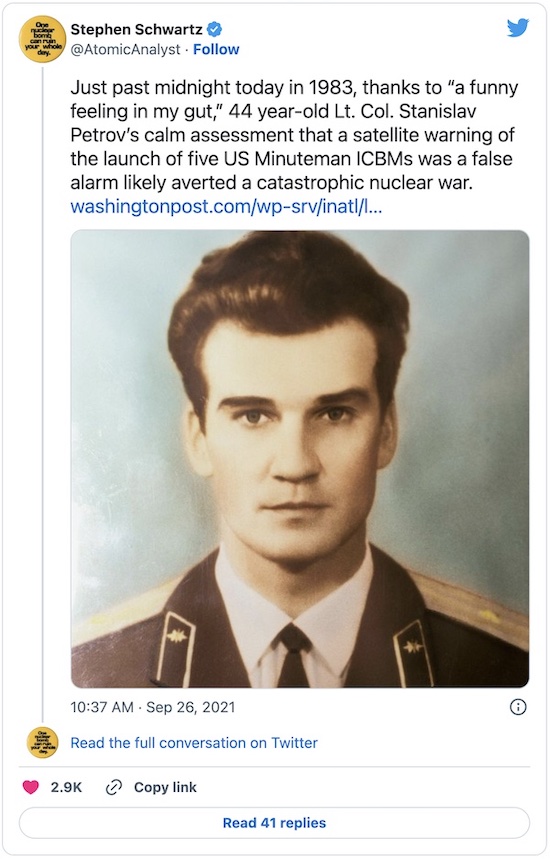 He did the right thing, not the thing he was asked. We should celebrate this as a virtue. (As we have, here on this Crummy Little Blog That Nobody Reads, a couple times before: here and here.)

Petrov’s action, 39 years ago, was to recognize that he was in an absurd, evil system that would have ended humanity if allowed a loose rein. He decided, at some personal peril, to buck the system and correctly identified a false positive instead of a nuclear strike.

He rebelled. We get to continue to live. 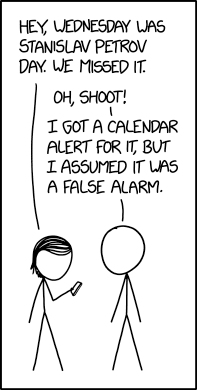 Do something or other that does not end the world, but contributes to the long-term health of humanity. You pick whatever it is, your own flavor of tikkun ha’olam.

When you find yourself also embedded in an absurd, evil system… do not obey. Do the right thing instead.