Petrov Day #38: Remembering the Day the World Did NOT End 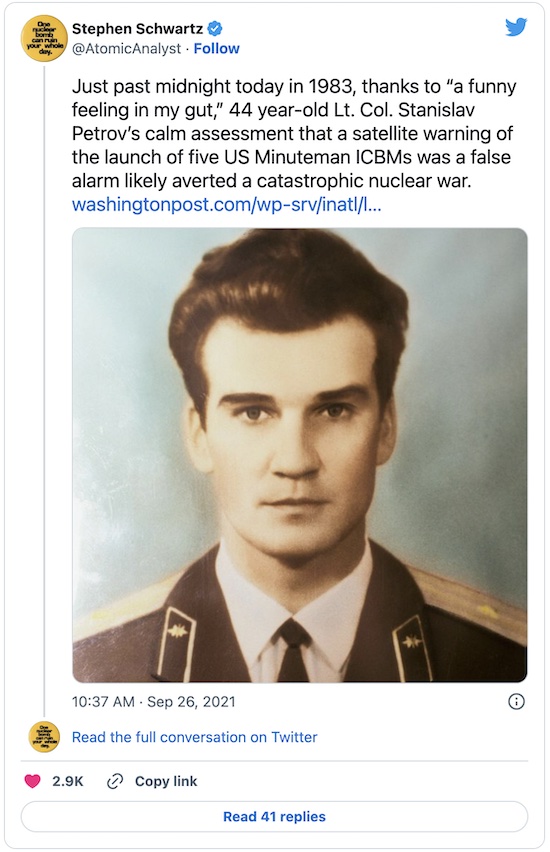 Today is the 38th anniversary of Stanislav Petrov’s decision on 1983-Sep-26 not to end the world. I first learned of this feat from Ozy Brennan at Thing of Things, which pointed me to a short didactic essay by Eliezer Yudkowsky.

On the day in question, sunlight had reflected off clouds had convinced a Soviet satellite watching a US missle base that 5 missiles had launched. Petrov, on his own authority, defied the launch on warning standing orders and declared it a false alarm. Probably Petrov thought something like, “One missile, I can understand — that’s an accident. One thousand missiles, I can understand — that’s an attack. But five missiles? That I cannot understand.” Petrov stepped outside the box of obedience, applied critical thinking, and decided not to cooperate with the system that would have ended the world. Or as Eliezer put it:

Petrov decided that, all else being equal, he would prefer not to destroy the world.

We should all do likewise: do not end the world.

As I write this in the evening, the world happens to be still in existence as far as I can tell. So I conclude that you have all correctly celebrated Petrov Day by not ending the world, yes? Just like last year.

If you want to play on the more advanced level, do something that heals the world: mip’nei tikkun ha’olam. [1]

1: Go heal the world, instead of reading my footnotes. ↩