Today we commemorate 1983-Sep-26: the day Stanislav Yevgrafovich Petrov prevented the end the world. Go thou forth and do likewise: save as much of the world as you can. 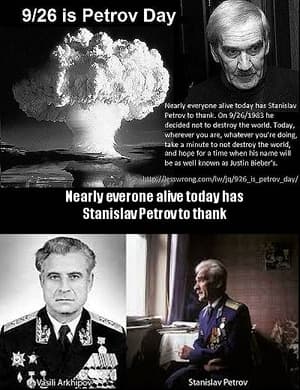 Ozy once wrote at Thing of Things inviting us to imagine a club in Heaven, called something like the Billionaire’s Club. Not, of course, rich guys, because… eugh. Rather, a club of people who have saved a billion human lives. Can there be such a thing? Who might be in such a club?

Depending on your religious community, you might of course imagine your deity as club president (creating/redeeming humanity hath its perks). But who else? Ozy starts us off with 9 names:

Petrov and Healthy Skepticism of Authority: Do What’s Right, Not What’s Asked

Today is the anniversary of Petrov’s decision not to follow orders that would almost certainly led to the extinction of humanity. I first learned about the details of his story from a very short essay by Eliezer Yudkowsky. Sunlight reflected off clouds had convinced a Soviet satellite watching a US missle base that 5 missiles had launched. Petrov, on his own authority, defied the launch on warning standing orders and declared it a false alarm. Probably Petrov thought something like, “One missile, I can understand — that’s an accident. One thousand missiles, I can understand — that’s an attack. But five missiles? That I cannot understand.” Petrov stepped outside the box of obedience, applied critical thinking, and decided not to cooperate with the system that would have ended the world. Or as Eliezer put it:

Petrov decided that, all else being equal, he would prefer not to destroy the world.

Petrov is a hero who should never have needed to show his heroism, but for being surrounded by institutional failure. In today’s pandemic, we face similar levels of institutional decay and bias for destruction. We could have controlled the COVID-19 pandemic; we thought instead that some triviality or other was more important. We desperately need to organize our societies so their default action is to build, not destroy.

Today in the “rationalist community”[3] surrounding Yudkowsky, people have invented rituals with which to celebrate Petrov Day (e.g., here, here (coronavirus edition, especially good), or here). It’s a thing well worth celebrating, the survival of humanity, no?

Do not be daunted by the enormity of the world’s grief. Do justly, now. Love mercy, now. Walk humbly, now. You are not obligated to complete the work, but neither are you free to abandon it. — Rabbi Tarfon, Pirkei Avot 2:16, Talmud (very approximately; actually a mix of sources)

1: Haber is a provisional member of the club, as he is to some extent also the father of modern chemical warfare. Opinion on his membership status is therefore somewhat divided. ↩

2: Though, admittedly, at huge costs in fossil-fuel-derived fertilizers. Probably a net win overall, but climate change may temper our opinion here, as well. ↩

3: An eccentric but fascinating community of people attempting to become more rational, more deliberate, more responsive to evidence, and able to live better lives less in thrall to ἀκρασία. Like all such attempts, they have their good days and bad days. See, e.g., the Less Wrong blog community. ↩

Thanks for this - looking forward to more grumpy old posts!

This is excellent. I look forward to new issues of the blog. A David W

↪︎ Reply to David Wunsch
Comments for this post are closed.