Paxlovid in the Wild Redux

What do we know about the people for whom paxlovid works really well?

We previously wrote a bit on this Crummy Little Blog That Nobody Reads (CLBTNR) about the paxlovid mechansim of action last January, discussing the med-chem optimization of paxlovid. [1]

Yes, biology is a kluge. Surely you are not surprised? Evolution places no premium on elegance by the standards of human understanding.

Paxlovid contains one ingredient called nirmatrelvir that inhibits 3CLpro/Mpro. This has 2 salutary effects:

There’s a whole long happy tale of why Pfizer “just happened” to have an Mpro inhibitor lying around, involving work on the original SARS epidemic back in 2003. A good research lab never loses information! Knowledge always turns out to be good for something, and keeping the people around who can find it for you is a good idea.

The other component of paxlovid is ritonavir. This is a medication that’s been used in HIV and hepatitis C for years. Yes, it’s mildly a 3CLpro/Mpro inhibitor in its own right. But the main reason for it is that your liver, via a gene called CYP3A, will break down nirmatrelvir too fast! We’d practically have to keep you in the hospital with a continuous infusion to make nirmatrelvir work on its own.

Ritonavir to the rescue: it inhibits CYP3A, which makes nirmatrelvir stay active in your body longer, which means it can keep whacking on the virus longer. And it means we can send you home with a couple blister packs of pills instead of keeping you on an IV. On the (slight) downside, ritonavir is the reason why paxlovid interacts unfavorably with so many other drugs: they’re broken down by CYP3A also!

All very nice. A triumph of drug development, really, illustrating How It Is Done.

For Whom the Paxlovid Tolls… or Rather, “Works” 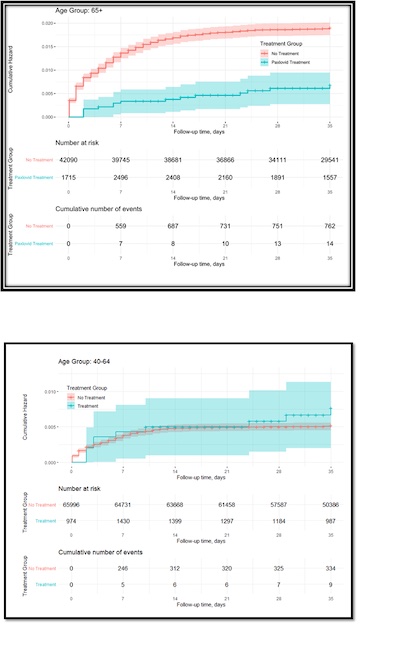 Previously on this CLBTNR we wrote about an Israeli study of where paxlovid has a huge benefit and were it doesn’t. [2] The conclusion we drew was: 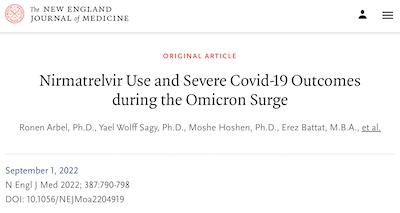 Now, that was based on a preprint, before peer review. So we were extremely pleased to see that the paper held up under peer review and was published in the prestigious New England Journal of Medicine last month. [3]

So kudos to the group at Clalit Health Services and Ben-Gurion University for some good, hard data on the merits of paxlovid. Solid work. Paxlovid is really, really good stuff. Also a great tale of effective drug discovery based on tons of past research. (Like the mRNA vaccines, for that matter, which are also based on decades of previous work!)

But for elders, with weaker immune systems, paxlovid fills a real gap in the risk, by fighting alongside their immune system to punch the virus hard enough that even an elderly immune system can cope.

I think the conclusion still stands:

Paxlovid is good stuff. It’s woefully underprescribed, because of all the misinformation and press concentrating only on the very minor bad events.