Previously, we wrote about how hard it currently is to find paxlovid, given intense demand, supply chain frustrations, and the complex synthesis pathway. Today let’s have a look at how exactly one goes about discovering such a thing, with an improbable number of steps in its chemistry. (Hint: an awful lot of luck/serendipity was involved!)

Of course, an enormous amount of effort in drug discovery goes into steps that occur before chemistry (long before, as in 5 or so years of effort). A slimmed-down, overly simplified version of the research pipeline that might feed into the development pipeline is something like:

Pfizer, when looking for COVID-19 therapeutics, got extremely lucky: previous work on SARS-CoV1 in China in the 2003 had already finished steps 1-5. They had a candidate molecule, PF-00835231, already at least partially optimized in med-chem, ready to move into clinical trials. But then SARS burned itself out, to the project got shelved. I’m sure there was some nervous side-eye when MERS broke out in the Middle East with its high mortality rate, but thankfully that burned out too.

Still, they shelved the project, didn’t throw it out. Yes there probably were knoweldge preserving systems, but more importantly there was institutional knowledge, in the form of people who still knew all this (and could probably show you the battle scars). So when SARS-CoV2 broke out into COVID-19 in late 2019, they remembered.

They knew that this coronavirus family had the giant gene ORF1ab. It encodes a “polyprotein”, i.e., a long string comprising several distinct viral proteins. The virus depends on a protease, called 3CLpro or Mpro, to cleave this apart into the functional proteins. If you gum up 3CLPro, then the polyprotein is not cleaved and the virus is stopped from reproducing. More importantly, there’s nothing much like 3CLpro in human, so you’re preferentially attacking an essential target in the virus, but not a human target. This makes 3CLpro a very attractive therapeutic target because it has a huge dose window: you can slam the virus really hard before you start having much effect on human cells. They already had molecules that did this for the original SARS virus from 20 years ago.

And that, boys and girls, is a helluva good starting point! On 2020-Mar-13, Pfizer med chemist Dafydd Owen was sent home from the lab in Cambridge, Massachusetts to work from home in the pandemic. He as told basically to “take a weekend” to think through how he’d put together a team to make a COVID-19 therapeutic. Owen, knowing where the bodies were buried, of course wisely chose the previous 3CLpro SARS inhibitor as a starting point. That is how you get t a human clinical trial in less than 12 months: start with a mostly-ready drug for a related disease, crash-priority funding and more or less unlimited resources, and a dedicated team of smart (and slightly desperate) people. 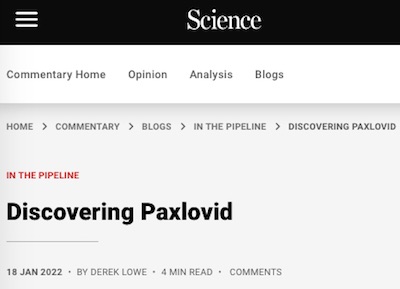 And that’s today’s story, brought to us by masterful med-chem blogger Derek Lowe at In the Pipeline [1], starting from an article in Chemical & Engineering News by Bethany Halford. [2]

They document the gnarly med-chem optimization work that led to nirmatrelvir, one of the 2 molecules that comprise paxlovid. (The other is ritonavir. It’s also a protease inhibitor used in HIV and hepatitis C. But more importantly, it inhibits the liver enzyme CYP3A that degrades many drugs for elimination from the body. On the one hand, this increases the lifetime of nirmatrelvir in the body and makes it stronger; on the other hand, it interacts with nearly every drug you’re like to take so physicians have to examine your prescriptions very carefully to modify them for paxlovid therapy.)

C&E News reported this set of structures. The middle one, PF-00835231, is the lead candidate for the original SARS project back in 2003. It’s similar to a peptide that binds to 3CLpro in nature. It binds to the 3CLpro ortholog in SARS-CoV1 well enough, but they wanted to do better. The bottom molecule is one of the intermediate candidates — these guys build anywhere from dozens to hundreds of these, searching for molecules that work better and are easier to synthesize — and the top molecule is the current nirmatrelvir structure.

But, of course, there were problems: 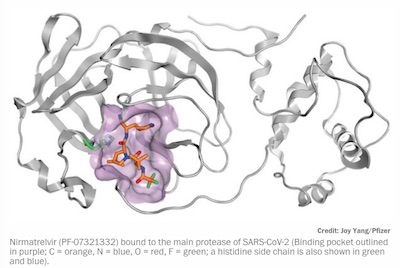 On 2020-Jul-22, they first made PF-07321332, now known as nirmaltrelvir, as one of about 20 compounds to be tested. The rat PK studies came back 2020-Sep-01, and this molecule was blessed. Here, in another illustration from Joy Yang of PFizer via C&E News, it’s shown in its binding pocket in 3CLpro:

This is what you want to see: an nice, deep pocket in the target protein, essential for its function, tightly gummed up with a small molecule of your crafting which prevents the protein from functioning.

At that point, the “lab weenies” hove to and made 1.4 kg of nirmatrelvir for the clinical trial. There are some very gnarly starting materials, like the bicyclic structure and the lactam, but at least there’s a plausible supply chain for those. We hope.

It was fast at 12 months from standing start to clinical trial. But it started from a very advanced point, based on previous work. And it was the work of literally 1000s of scientists working flat-out with no breaks, and with an apparently nearly unlimited budget. But here we are: an orally available protease inhibitor combination drug, which has about 89% efficacy in preventing hospitalization.

That… is good work. I’ve never seen anything that even comes close to this. We can’t repeat the lucky starting point, but we can appreciate that you never let go of prior research.

Activity vs the SARS-CoV2 Omicron variant 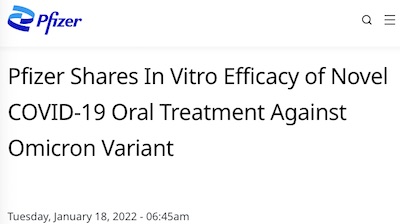 The other question everybody wants to know about: will this work against Omicron, as well? The answer should be yes, because while Omicron has many mutations, very few are in 3CLpro, the target of nirmatrelvir. Along those lines came a press release yesterday from Pfizer [3]:

NEW YORK, January 18, 2022 — Pfizer Inc. (NYSE: PFE) today shared results from multiple studies demonstrating that the in vitro efficacy of nirmatrelvir, the active main protease (Mpro) inhibitor of PAXLOVID™ (nirmatrelvir [PF-07321332] tablets and ritonavir tablets), is maintained against the SARS-CoV-2 variant Omicron. Taken together, these in vitro studies suggest that PAXLOVID has the potential to maintain plasma concentrations many-fold times higher than the amount required to prevent Omicron from replicating in cells.

So it looks like we can hope for some pan-coronavirus activity, given conserved structure of viral protease 3CLpro (Mpro).

The press release goes on for some time, as these things tend to do. Much of it is gluteal armor, to prevent them from getting bitten in the behind by lawyers now that this is a medication being given to actual people. But stripped of that, there were a few other interesting things about in vitro studies of nirmatrelvir across SARS-CoV2 variants: 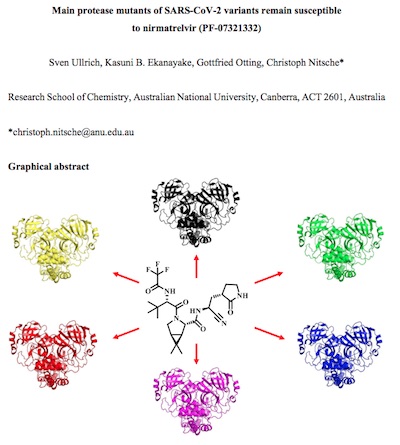 It looks like the rapid development of paxlovid was due to a combination of luck (previous work on a 3CLpro inhibitor for SARS in 2003) and hard work (Owen and his team at Pfizer). Another piece of luck is the broad activity against SARS coronavirus variants, which is very hopeful indeed.

Some of this was serendipity, with the previous 3CLpro inhibitor being remembered at the right time by the right people. As I’ve been known to say, somewhat irritatingly:

You can’t plan serendipity – give chance a chance!

… and here serendipity came through for us. There’s nothing so useful as a huge knowledge base of what you’ve tried in the past, to inform what you should try next.

The religious side of me wants to be grateful for whatever divine influence put these tools in our hands at precisely the right moment. The more pragmatic side of me just wants all of us to be thankful for the fantastic series of fortunate coincidences:

We have a lot to regret (millions dead, a worldwide descent into superstitious vaccine defiance coupled with revenant right-wing fascism), but we also have a lot for which we can be very grateful.

I prefer the latter.