COVID-19 vaccines: the need for speed

Vaccine rollouts worldwide, with very few exceptions, have been slow & bungled. But we face a cruel equation: delay = death. Why do we tolerate this?

The longer we take to vaccinate the entire world, the more people die from COVID classic, and the more potential vaccine resistance mutations show up in the SARS-CoV-2 virus. Indeed, slow vaccination is the ideal situation for creating resistance mutations: maximal selective pressure on the virus to mutate, and lots of new people to infect always available.

So why are we bungling it world-wide?

Remember about a month ago, we reported on this blog that there was evidence of COVID fatigue in France among the 20-somethings leading to massive infections and deaths in the elderly? 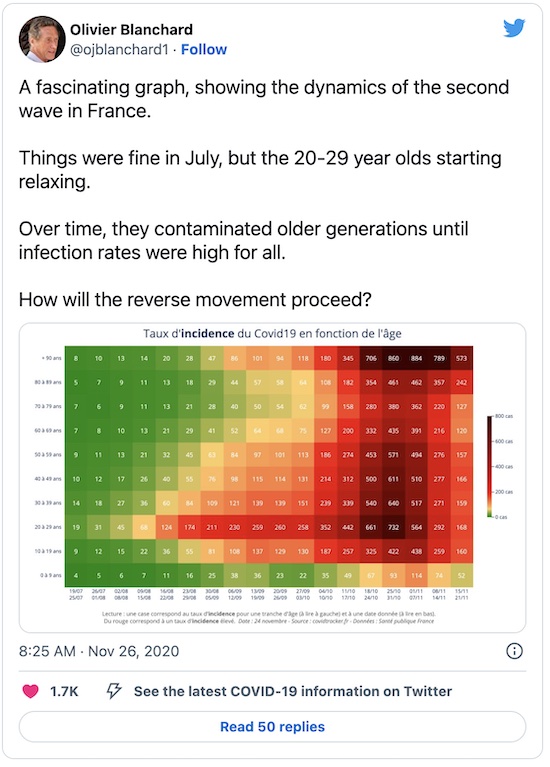 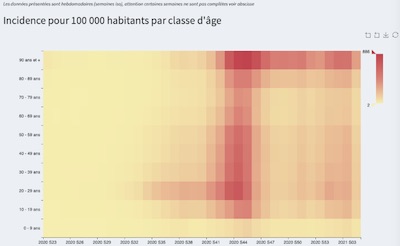 Now Guillaume Pressiat, writing on his blog alt-R native (which I discovered via R-bloggers), presents us with an R/Shiny app that’s kept up to date with data from Santé Publique France. Things really haven’t gotten much better for the French elderly, as you can see. The US is probably similar, but we don’t have organized ways to make the data available with each state (and sometimes county!) being a separate fiefdom.

If you find yourself in the 20-something demographic and are for some reason reading this blog (Why?! Please tell me in the comments, because I’m really curious about you!), I have a message for you from your elders.

We elders understand that you need to hang with your friends, and sometimes get a little rowdy. It’s a time-of-life thing. We did it too, long ago. So honest, we understand your need and are prepared to be reasonably sympathetic. But please: hold off on the wild parties until we all get vaccinated, ok? Because those are Granny Murder Parties, and your grammas don’t wanna die. (“Morituri… nolumus mori”, in the immortal words of the regrettably mortal Terry Pratchett.)

Once we’re all vaccinated, then you can cut loose with our blessing. I mean, sure, I’m still gonna shake my fist and yell “You kids get off my lawn”, and you’ll still reply “OK, boomer”… but we’ll both be doing it ironically. We’ll both still be alive to say that, and happily so. It’ll be a good time for both of us. Promise. Just hang on a little longer.

Vaccinating all of humanity

Here’s the thing about vaccines in the modern world: unless you vaccinate pretty much all of humanity, you’ve left a reservoir of susceptible people where the virus can multiply and mutate. Sooner or later, that will develop a vaccine resistance mutation and it will come back to bite us. So, look: first, good care for everybody is just the right thing to do; second, it’s also the only sensible thing to keep the vaccinated population safe.

That’s why this tweet a few weeks ago from Amy Maxmen, who reports for Nature, was so disheartening: 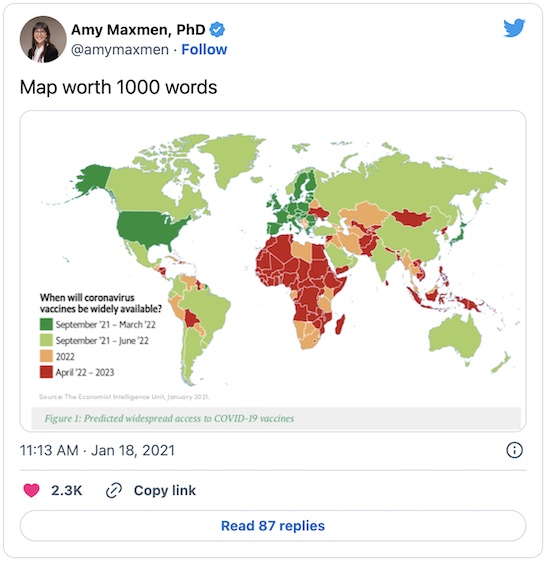 We’re replicating the structural discrimination of colonialism, and creating reservoirs of unvaccinated people where the virus can continue to mutate. This is both wrong fundamentally in the way the rich treat the poor, but it’s also rotten strategy even for the rich to keep themselves safe.

Israel is proof that this can be done. They’re vaccinating everybody, there’s an orderly system that tells you when & where to show up, and there’s a plan for unused doses at the end of the day. (Basically: nurses go out into the street and yell for anybody who wants a vaccine to come here right now. I’ve even heard of nurses yelling, “Hey, pizza guy: want a vaccine?” to delivery persons.) Now Israel has lots and lots of other problems, with many sorts of structural discrimination against the Palestinians. But at least in this instance, they know rapid vaccination leads to declines in infection, hospitalization, and death rates. This is how it’s done. 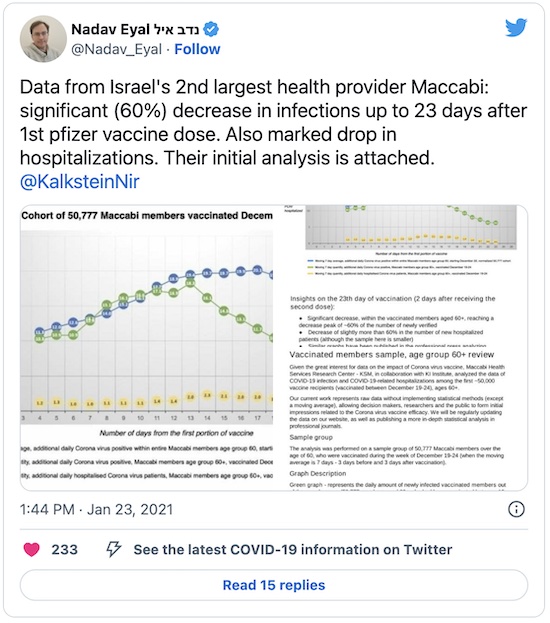 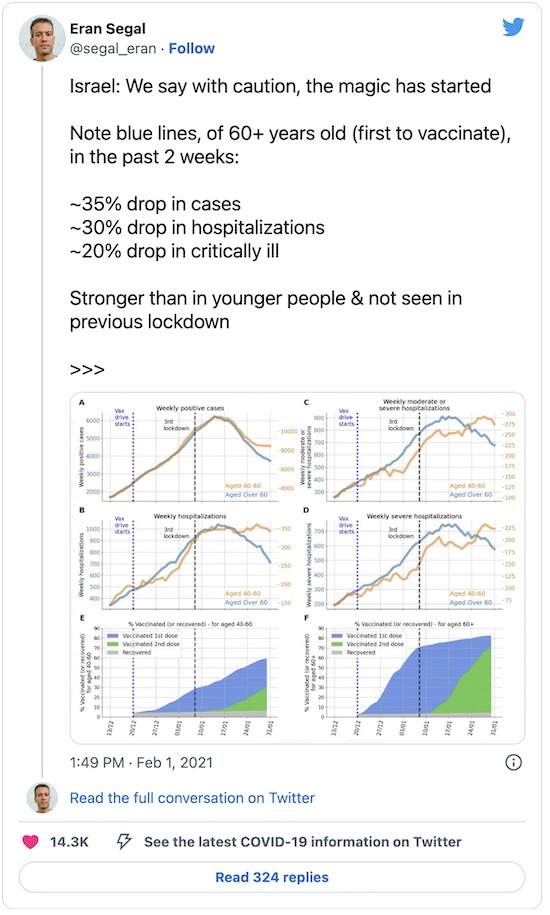 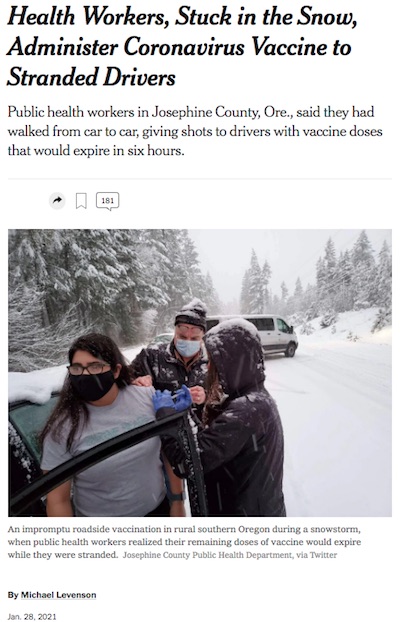 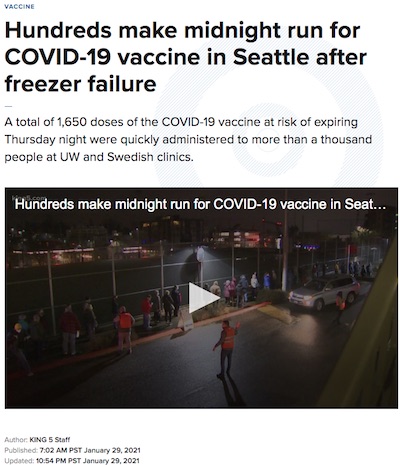 It can even be done here in the US, where sometimes I feel like it’s almost impossible to get anything done right. Some examples:

Vaccinate everybody. (Yeah, I know: I’m being hopelessly naïve about the anti-vaxers and those with a (sometimes justified) suspicion of Western medicine. But the anti-vaxers, at least, are already hopeless. Think of it as evolution in action.) 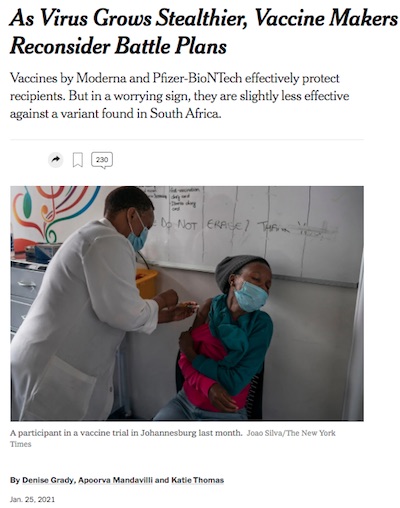 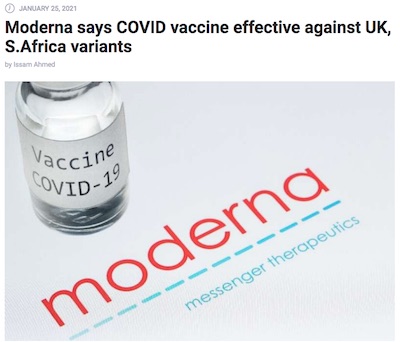 The resistance mutations are already here, both in the B.1.1.7 (UK) and B.1.351 (South Africa) variants. [3] We know they affect vaccine efficacy, though for now at least the mRNA vaccines seem to be working. [4]

As we saw just a couple days ago, the J&J vaccine dips down to an alarmingly low efficacy of 57% against the South African variant. Our data on the mRNA vaccines from Pfizer & Moderna is largely in vitro (as we blogged about last month). But since those trials happened before the new variants got out much, we don’t really know their efficacy in vivo.

In some ways, this is the most frightening phase of the whole pandemic. While we’re applying the vaccine to ourselves, that’s applying evolutionary selective pressure on the virus to find an escape mutation that makes it vaccine resistant. And because most of humanity is not yet vaccinated, there are plenty of people for those new variants to infect, as they are currently doing.

Vaccinating slowly means we’re pressuring the virus to change, and providing plenty of willing victims into whom it can spread. Only when substantially everyone (including the developed world) is vaccinated will there be herd immunity, where the virus can’t spread. Hence: delay = death. So if you don’t want a more virulent and mutated resistant vaccine, don’t delay vaccines!

Yes, it’s true: the mRNA vaccines are made largely by RNA synthesizers, which are basically machines into which you program the sequence of RNA you want. BioNTech says they can spin up a new variant vaccine in about 6 weeks (see the NYT article). Moderna is already starting that (see the MedicalXPress article). That’s for the design of a new vaccine; the actual manufacturing is quite complex and requires facilities that are already busy, as Derek Lowe explains in a nice little tutorial on mRNA vaccine manufacturing steps at In the Pipeline. [9]

But, there are at least 2 other problems even if we could make lots more vaccines fast:

So we have to clean up our act in both of those regards for the scientific fact of nimble mRNA vaccine design to be of benefit to us. 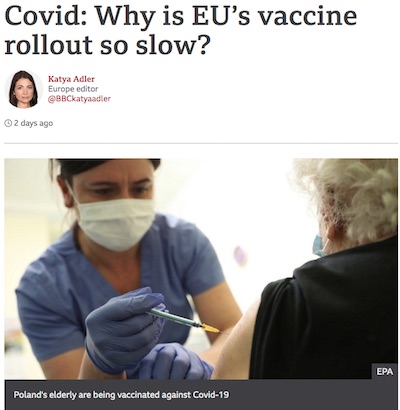 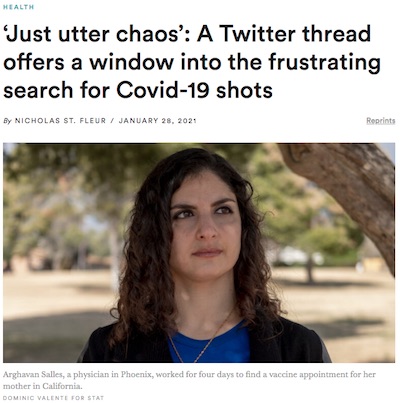 If it’s that crucial, why does the rollout seem to be slow and bungled, worldwide? (Ok, except for Israel (which is vaccinating fast), and New Zealand (which isolated fast).)

There seem to be multiple delays in delivery from multiple vaccine vendors in the European Union. [5] Frustratingly, when you drill down to look at Pfizer, Moderna, and AstraZeneca, there seem to be different causes for delay and shortages in each case. Nonetheless, it’s understandably infuriating when all of them simultaneously slow down deliveries, and that’s going to cause considerable political anger in the EU. They’re already testing tempers about vaccine exports out of the EU, and even across borders within the EU. Hungary has gotten so desparate they’ve begun purchasing the Russian Sputnik V vaccine.

In the US, it’s just as chaotic: there’s no national plan for vaccine sites, mostly because Trump didn’t think it was his job and pushed it down to the states. Some states, like Florida, have gone further and pushed the whole thing down to the county level. How much of a budget for mass vaccination do you think county health boards have? Do you think there will be a difference between rich and poor counties?

STAT News has a story of a physician in Phoenix who dived into the chaos, trying to find vaccination appointments for her mother in California. [6] It took her 4 days, and she’s a physician who knows how to work the system. ‘Just utter chaos’, indeed.

This is not an isolated case; it’s typical of the state of the US. We can’t figure out how to get organized enough to get the vaccine into arms. I hope we’ll get better with time; after all, we’ve only recently resurrected the very idea of having an organized national government about 10 days ago. 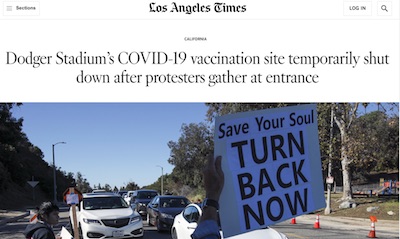 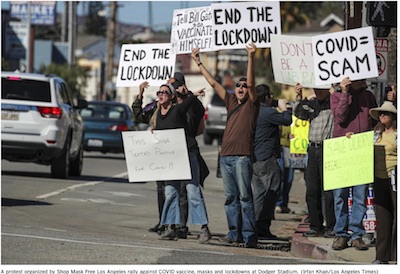 As if that’s not enough: a bizarre farrago of anti-vaxers and far-right groups actually shut down the mass vaccination site at Dodgers Statdium in Los Angeles. [7] I… Just. Can’t. Even.

PZ Myers had a thought or two on this over at Pharyngula. Spoiler: he didn’t like it either.

Fortunately, all the doses were given out and no appointments were cancelled. Lots of tempers were frayed by the floridly performative stupidity and pointlessness.

Look, just get vaccinated. I know it’s hard. Believe me, I’ve been poking at the upcoming possibility of vaccination eligibility for myself, so I understand personally. But just fight through the BS and get it done. Ask for help if you need it.

In the meantime, you know what to do to keep safe. So keep doing that. If you haven’t been doing that, start now. (Ok, the voting part of that advice is now settled. But do the rest.)

Someday soon I’ll be able to yell “You kids get off my lawn”, you can give the de rigeur bored riposte “OK, boomer”. We’ll both grin like maniacs because we lived through COVID. That’ll be fun.

“If ever there was reason to vaccinate as many people as expeditiously as we possibly can with the vaccine that we have right now, now is the time,” Dr. Anthony S. Fauci, the government’s top infectious disease expert, said in an interview. “Because the less people that get infected, the less chance you’re going to give this particular mutant a chance to become dominant.”