The mutant coronavirus: will the vaccines still work?

Somebody asked me whether the COVID-19 vaccines currently being used would work vs the mutant form of SARS-CoV-2 now driving COVID-19 in the UK. Looks like it probably will, though nobody really knows. What will definitely work: masking, social distancing, working from home, no gatherings beyond a single household, having adequate food & medicine stored, getting a flu vaccination, and not being a super-spreader of misinformation.

The virus behind COVID-19, euphoniously yclept SARS-CoV-2, has mutated. Nothing especially unusual about that; it’s what viruses do, and how evolution works. RNA viruses mutate especially fast – this is why you need a new flu vaccine every year.

Most of the mutations seen in SARS-CoV-2 are of no particular import. Mutations are more or less random, after all. Even unimportant mutations can be used as barcodes, to tell us exactly which variant from which part of the world has infected a patient. But we care mostly about mutations in the gene for the spike protein that SARS-CoV-2 uses to bind to the ACE2 receptor in human epithelial tissue. That’s the key protein to which the Pfizer and Moderna vaccines alert your immune system. A major change here could be what’s called an “escape mutation”, potentiating vaccine resistance. 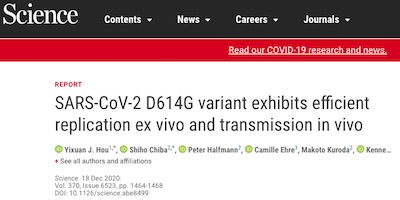 So how do we characterize this new variant, especially in the spike protein? A Science paper by Hou, et al. [1] has the goods: 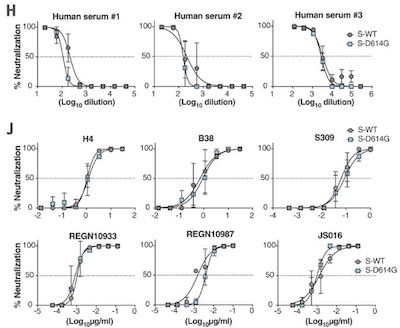 Looking at Figures 2 H & J from their paper underscores the good news. These are dose-response curves, each showing the neutralization of the wild-type and mutant viruses. The agents used were either sera from recovered patients, or artificial antibodies made to fight the wild-type. 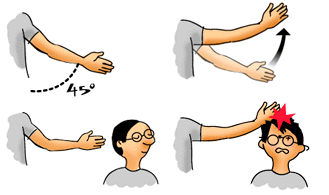 (NB: In Figure 2 H (top), the sera are being diluted as you move to the right on the horizontal axis. So antibody concentrations increase to the left. In Figure 2 J (bottom), the concentration of therapeutic antibodies increase to the right on the horizontal axis. So the curves actually are more or less similar in Figures 2 H & J. No, I dunno why they did that; it seems at least worthy of a Boston Car Talk “dope-slap” from the journal’s referees: make the axes mean the same thing in the same direction! But then, I’m a grumpy old retired scientist who apparently entertains dope-slap fantasies. So there’s that much in their defense.)

Without getting out in the weeds of detail on what these curves mean (though that’s a pleasant passtime in itself!), basically it shows in each plot that the pair of curves for the wild-type and the mutant virus are more or less comparable. If an antibody works against the wild-type virus, it also works against the mutant type virus about as well.

Is it in the US yet? 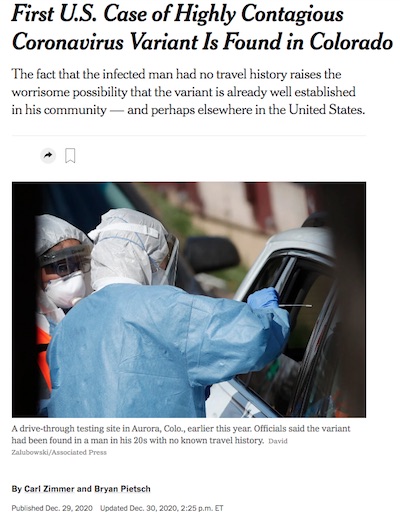 Not to be too American-centric about it, but: yes. The New York Times reports [2] (via rather accomplished popular science writer Carl Zimmer and colleagues) that the UK mutation has been found in a patient in Colorado.

Alarmingly, this patient has no travel history to the UK or anywhere else recently. He got it somewhere, but we don’t know how and thus can’t try to prevent it with public health measures. If, that is, Americans could be persuaded to take public health measures seriously. Which is, as you may have noticed, in some doubt.

And really, we must not be American-centric about a world public health problem. As we recently noted from Dr Tedros of the WHO, nobody is safe until everybody is safe. So the only sane response is to… make everybody safe.

So… vaccine or no? 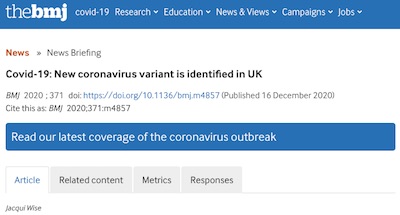 A news article in the BMJ [3] reports on the relationship to vaccines. (Though, curiously, they report the spike mutation as N501Y instead of D614G, so maybe it’s yet another variation?)

The most relevant bit is this:

Will the vaccine still work?

The new variant has mutations to the spike protein that the three leading vaccines are targeting. However, vaccines produce antibodies against many regions in the spike protein, so it’s unlikely that a single change would make the vaccine less effective.

Over time, as more mutations occur, the vaccine may need to be altered. This happens with seasonal flu, which mutates every year, and the vaccine is adjusted accordingly. The SARS-CoV-2 virus doesn’t mutate as quickly as the flu virus, and the vaccines that have so far proved effective in trials are types that can easily be tweaked if necessary.

[Sharon Peacock, director of COG-UK] said, “With this variant there is no evidence that it will evade the vaccination or a human immune response. But if there is an instance of vaccine failure or reinfection then that case should be treated as high priority for genetic sequencing.”

So… yeah, the vaccines still look good. Especially the dose-response curves above, showing neutralization of the new virus by antibodies against the old virus.

And really, the same stuff everybody’s been telling you to do, even on this crummy little obscure blog, still works against the new variant as well, until you can get a vaccine.