You all are scaring me, with your science denying, mask refusing, socially close quarters, holiday travelling ways. C’mon: wear a mask, socially distance, avoid indoor gatherings, get a flu shot. At least pretend to try you want to live until the vaccine is available, ok? Then maybe you won’t randomly kill the rest of us, who do want to live.

People are behaving stupidly [1]: not wearing masks (or wearing them maliciously, e.g., under their noses), traveling for holidays, going to parties, not getting flu shots, agitating against vaccines for anything… And that doesn’t even begin to cover it – I can barely believe the sack-of-hammers crazy stuff I’ve heard people say in all somber seriousness.

It’s all starting to terrify me, because this level of stupidity is often a capital crime in the court that enforces the laws of nature. A Journal of the American Medical Association editorial by 3 public health experts [2] notes that COVID-19 is now the leading cause of death in the US! Worse than cancer. Worse than heart disease. It’s been an age since that was true of an infectious disease. They note the current US death rate is equivalent to 15 plane crashes a day, each killing 150 passengers. It’s like having a 9/11 event every day and a half. It could even be up to about 50% worse due to reporting delays, coding mistakes, and general pandemic overload in the healthcare system. Their conclusion:

The need for the entire population to take the disease seriously—notably to wear masks and maintain social distance—could not be more urgent. 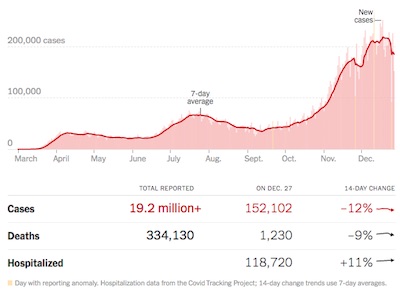 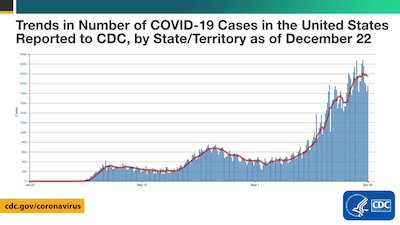 Some graphics from the New York Times and the CDC agree: the third wave in the US is viscious. I’ve carefully sourced the data from 2 places here, both with extremely good reputations, just to avoid criticism that I’m using doubtful data in an inflammatory way. I’m using good data, in I hope a good way; the information itself is inflammatory.

It was frightening in the spring. It was annoying in the summer (though in New England we seem to have skipped that one, thankfully). It’s infuriating now: how can people not have been paying attention?!

Note the structure in that 3rd peak: see the bump up in case rates in December? That’s the beginning of the payment in misery and deaths for reckless Thanksgiving gatherings. All of which was avoidable by minor behavior changes that public health people have been shouting at the top of their lungs for months now. Avoidable misery. Avoidable deaths.

A joke I found initially amusing, but now just depressing: 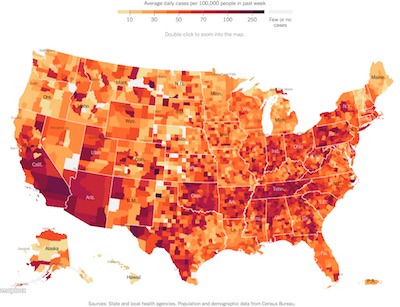 When you break it down geographically, this county-by-county map from the NYT shows that there are definite hot spots.

You can slice & dice these data in a number of ways, but right now I’m glad that here at Chez Weekend we’re comparatively safe in New England. I say comparatively because of course we are not safe: there’s plenty of COVID-19 here. Just not the nightmare of the South, or southern California.

So all the numbers in that JAMA editorial are even more damning. We don’t just have a high death rate, we have geographically concentrated high death rates. Why then, are all the red states not yelling for help because our government is hanging them out to dry with little to no public health support? I really don’t get it. Were I prone to conspiracy theories, I’d tend to theorize that somebody is trying to lower the population in the conservative states, and has somehow gotten them to buy into their own deaths. It makes no sense.

Not just ‘your body, your choice’: you live with the rest of us

“My body, my choice” is a phrase I keep hearing from people who resist masks, and even resist vaccines. (I wonder if they know they’re re-using a slogan originated in defense of abortion rights?) I have great sympathy for this viewpoint, as in people should be in charge of their own bodies and that’s a reasonable argument in favor of abortion.

But in the case of COVID, this is just incoherent. The disease is infectious. You may make some idiotic decision that increases your personal COVID risk, but of course you are also going to pass on COVID to those around you. That’s what “infectious” means. Reckless behavior risks not just your own health, but assaults the health of everyone else. (It’s also dumb as a box of hair.)

Olivier Blanchard makes this case using data in France. It appears the age 20-29 cohort lost control in July and got infected. Too bad for them, but it’s their own fault and they’re young anyway so they won’t face severe consequences, right? Wrong: they of course infected everyone else over period of time, and caused many needless deaths among their elders. Why kill grandma? 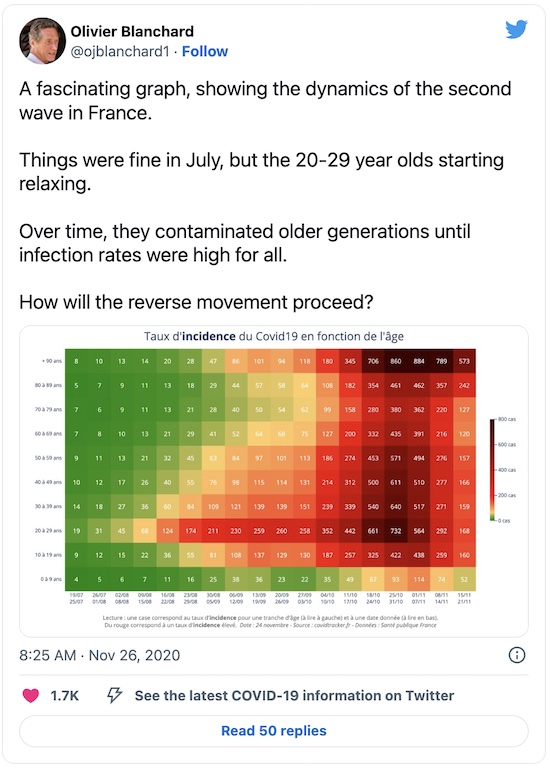 A similar sentiment from Tedros Adhanom Ghebreyesus (“Dr Tedros”), Director-General of the World Health Organization, rather mildly expressed the truism that, in matters of public health, no one is safe until everyone is safe. As the price for this rather obvious bit of wisdom, he was dragged over the coals by covidiots in the Twitter responses (not reproduced here, because they’re too infuriating).

How can something this obvious be denied by people competent to operate a keyboard?! In matters of public health, especially infectious diseases, we are in fact all in it together. Our death rates can only be controlled by collective action, not individual action. 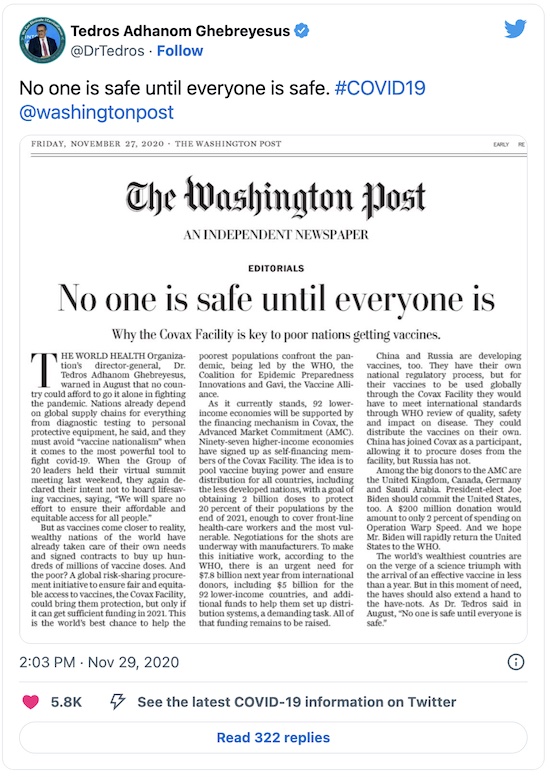 Oy, vey: why do we even bother? 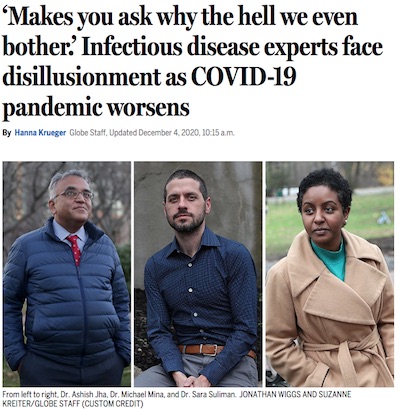 Rather more unfortunately, the venerable Globe reports that many public health experts and healthcare providers are also in a state of despair: as in “why the hell we even bother” trying to save lives when all we get back is ignorant contempt. [3]

“At almost every step of this pandemic, we have failed magnificently as a country,” the Harvard scientist [Professor of epidemiology Michael Mina] said Monday. “And in ways that we just really didn’t need to fail.”
…
“I’m just astounded by the dysfunction, the willingness to just stay the course as hundreds of thousands of people die, and the unwillingness to innovate in literally any way,” said Mina, an assistant professor of epidemiology at Harvard’s T.H. Chan School of Public Health, who has been advocating for widespread at-home rapid antigen testing since March, with little success. “I’ve realized that when we need to rise up as a country, we have truly no moral capacity to do it. It’s just the most mind-bending, complete “Twilight Zone” experience that makes you ask why the hell we even bother.”

We have many scientists and clinicians who have spent their entire careers preparing for situations like this. Instead of listening to them, we prefer dirt-stupid claims of right-wing politics, general cowardice of our leaders, and downright superstition. People don’t just ignore public health guidance, they’re hostile to it:

[Harvard epidemiologist Dr. Caroline Buckee] suspended her Twitter account after her feed, mostly consisting of pandemic advice and research, triggered a cascade of sexist and personal attacks that threatened her and her family.
…
… in late November, [Dr. Ashish Jha, deah of Brown University’s School of Public Health] testified before Congress about the inefficacy of hydroxychloroquine, a drug used to treat malaria and touted by President Trump as a “game changer” in the fight against the coronavirus. Shortly after the hearing, Jha said the threats lodged at him grew more serious and tangible, prompting him to alert police, who sent cruisers to patrol his neighborhood.

The experience mirrors that of Dr. Anthony Fauci, perhaps the nation’s most well-known infectious disease expert, who has required a security detail for months following threats to himself and his family.

What you can do 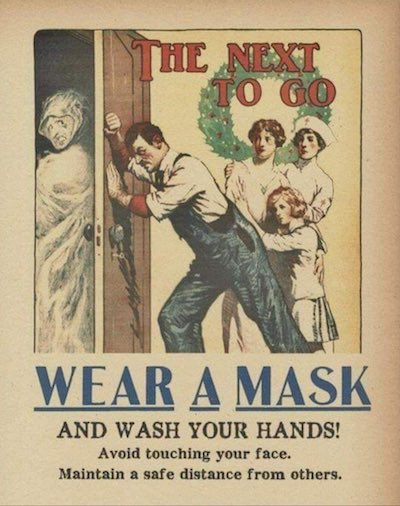 A century ago, our elders knew how to do The Right Thing during the 1918 flu pandemic. Why don’t we?

Look, I’m gonna repeat & amplify some stuff I said here last month, things you can do to make life a little bit better:

Listen to Gandalf, as Helen Branswell helpfully advises below. (Or Magneto, if that’s how you roll.) Either way: get vaccinated, and stay safe until then. 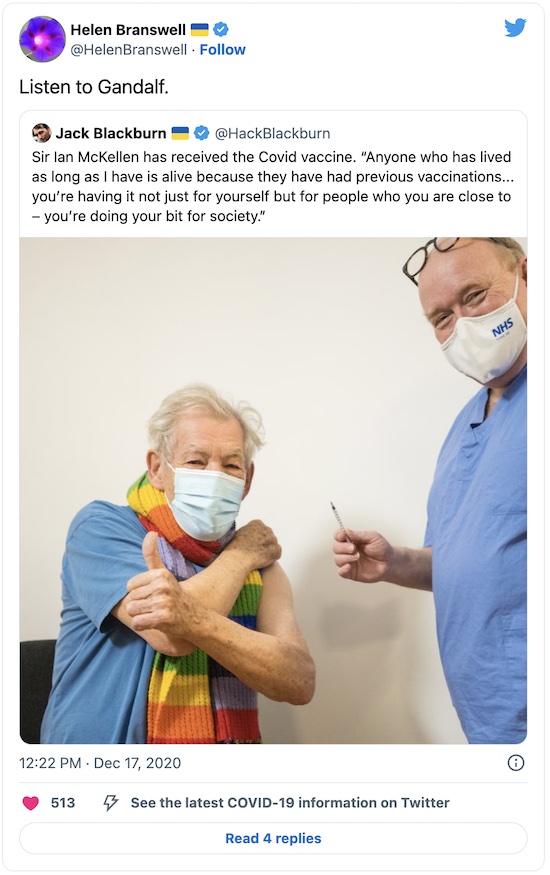 1: This post is about public health dysfunction in the US. For readers outside the US, it may or may not apply to your home. If not, congratulations; I’m jealous of you. ↩