With vaccination rates rising (albeit glacially slowly), and new therapeutics like molnupiravir and paxlovid about to be approved, people are asking: is it over? My take is: probably not.

We’ve offered some praise in the past for COVID-19 therapeutics that really seem to work. The leaders right now for early intervention seem to be fluvoxamine, molnupiravir and paxlovid. Fluvoxamine is already approved (as an anti-depressant and OCD therapy), while molnupiravir and paxlovid will come before the FDA after a week or two more of review. They are likely to be approved by December, unless something horrific is uncovered, like fraud – and the chances of that are low. (The FDA VRBPAC meets 2021-Nov-30 to consider molnupiravir; paxlovid is not yet scheduled.)

The are, indeed, exciting news! Paxlovid in particular, with an efficacy against hospitalization of 89% (CL: 66% - 96%) looks like it can really move the needle. Molnupiravir, with efficacy of 48% (CL: 21% - 66%) is lower, but still worthwhile. Even more exciting is that all 3 drugs (especially fluvoxamine, which has been widely prescribed for years) seem quite safe.

That means it will be almost inevitable to try them in combination, to look for synergy of effect: getting more than the sum of the individual effects of each drug. True, the companies making them are different, and hence uninterested in “promoting the competitors”, as my erstwhile management would say to my great frustration (I was the guy hunting down synergy combinations in oncology research).

Still, someone will do it. I wouldn’t be even slightly surprised to hear that the NIH was getting grant proposals on this already.

But then, prominent people always think so. That is especially true when they’re estimating the difficulty of problems not in their own fields. (Tabarrok is justly famous as an economist, not as a public health specialist.)

Your humble Weekend Editor is not a public health specialist either, but at least somewhat adjacent in pharma research for many years. I think it’s not over. 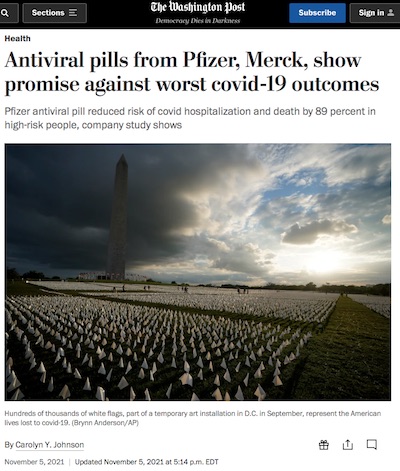 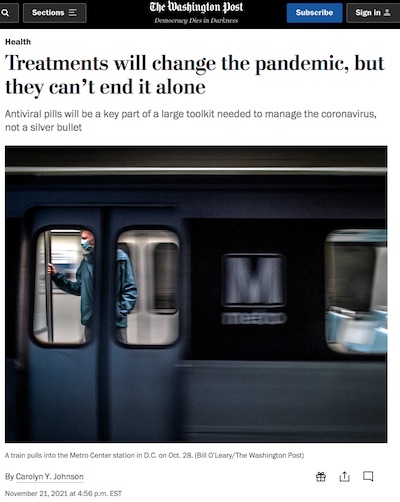 A couple WaPo articles by Carolyn Y Johnson [1] [2] outline the state of the world and some of the problems ahead.

Yes, molnupiravir and paxlovid work. Yes, the safety profiles look pretty good so far. Yes, that means we might be able to use them prophylactically on the contacts of an infected person before they show symptoms. Yes, Pfizer has already announced they will allow immediate generic manufacture of paxlovid abroad. Yes, the US government has pre-ordered millions of courses of treatment even before approval, to make sure manufacturing gets spun up quickly. Yes, manufacturing is in fact spinning up:

But… these aren’t a complete solution to the problem. A piece, yes. But other pieces like rapid testing, vaccination, boosters, antibodies, increased hospital ventilator capacity, and so on cannot be neglected. The main role of these 2 new antivirals is if there’s lots of rapid testing, then you get your infection caught, diagnosed, and prescribed early; then you spend a week at home taking a couple pills a day so your infection is mild. During that time you still have to isolate, with which lots of people will refuse to comply. 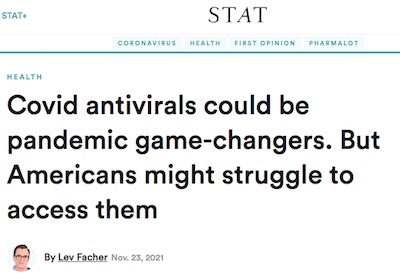 A slightly more realistic (and pessimistic) take on the situation comes from Lev Facher at STAT News. [3] He points out a number of structural problems in the US healthcare system that in effect require people to jump through multiple hoops to get treatment: enough health education to recognize symptoms, finding a test, getting tested and diagnosed, getting a prescription from a doctor, and getting that prescription filled. This introduces multiple points of failure, and is made worse by economic inequality, structural racism, and language barriers. We make it hard for some groups to access health care.

Just consider testing. Tests are in scandalously short supply in the US:

And all of that has to happen within about 3 – 5 days of the onset of symptoms. While you’re feeling sick, you must first fight the sclerotic US healthcare system.

Facher points out, I hope ironically, that the best places for that to happen are nursing homes and prisons: the person doing the testing, diagnosis, prescribing, and administration may well be the same person on the same day.

Conclusion: In order to make early treatment work, testing must be fast, cheap, and ubiquitous.

I can think of a number of other stumbling blocks that we’ve managed to stumble over in the past, so they’re possible this time:

Yeah, I’m in a more pessimistic mood (true, it’s a character flaw). But I wish I didn’t keep getting confronted with evidence that pessimism is merited by the situation.

We’ll get to herd immunity when > 85% are vaccinated or recovered from COVID-19, and the rest are dead. (The 85% comes from applying a SIR model to the Delta $R_0 \sim 6 - 7$ or so.) Because those are the inevitable near-term alternatives: either you get vaccinated, or you will get Delta COVID-19, after which you are (somewhat the worse for wear) recovered… or you are dead.

Until herd immunity, here at Chez Weekend we prefer to sort out the probabilities to bias our future against the “being dead” part. That means getting vaccinated to prevent COVID-19 and make any breakthrough infection likely milder, as well as checking health insurance is up to date and that we’re on good terms with our PCP.

You should consider doing likewise.

3: L Facher, “Covid antivirals could be pandemic game-changers. But Americans might struggle to access them”, STAT News, 2021-Nov-23. ↩