The Partisan Divide on COVID-19 Deaths

COVID-19 death rates in the US are nakedly partisan. So is mask resistance. So is delusional belief about nonsensical use of ivermectin and hydroxychloroquine. Care to draw a conclusion?

The partisan divide in death rates 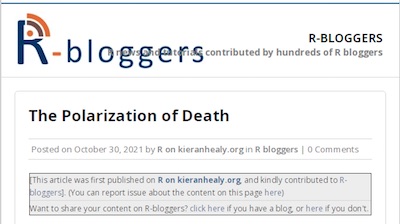 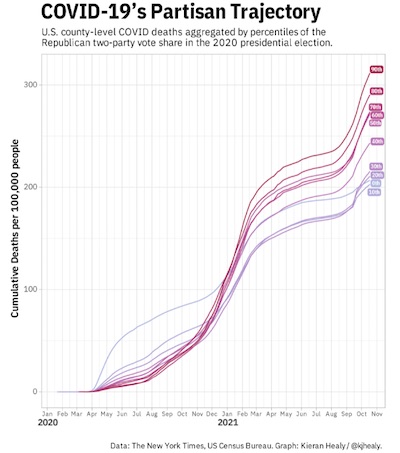 Kieran Healy has done some interesting work relating the COVID-19 death rates in US counties over time, stratified by deciles of Republican margin over Democrats, reported in R bloggers and his own blog, as well as a GitHub repository for the data and code. [1] [2]

The cumulative death curves here show about what you’d expect:

We’ve seen this before at the state level by our own analysis and at the county level by an analysis due to Charles Gaba. COVID-19 infections and vaccine resistance correlate to conservative Republican votes. Now we know that this is also true of death rates.

Gaba went on to summarize this result in a simple bar chart, for those who find mulitple time courses too confusing: 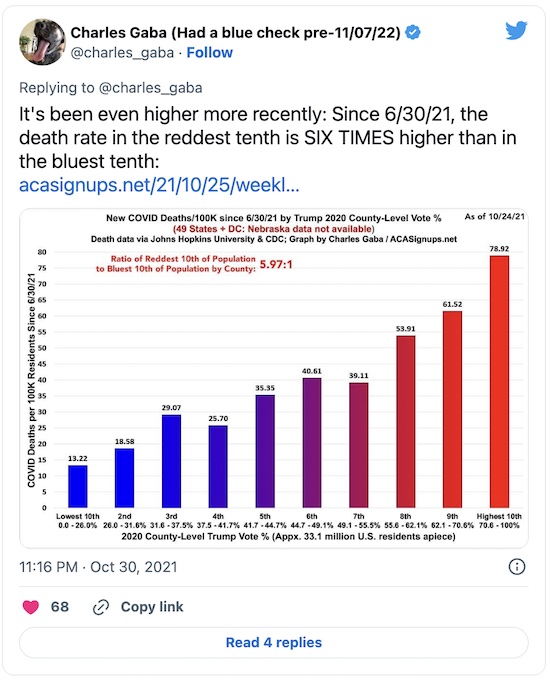 The Twitter commentariat was even more put out about this than me (which is saying something): 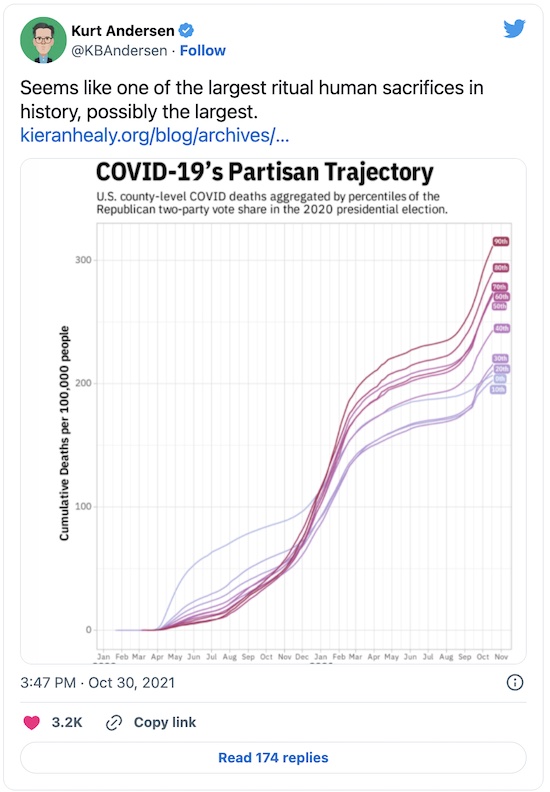 Now you know why you’re so often hearing the phrase “GOP death cult”: when your tribal identity pushes you to actions that kill you and your fellow tribe members, it’s time to change tribes.

The partisan divide in NPIs

We’ve seen similar results with non-pharmaceutical interventions (NPIs) like masking and social distancing, where the irrational declare their refusal to be “muzzled.”

It’s no reassurance whatsoever to know that there were similar levels of resistance to masking during the 1918 flu pandemic. An article in the Guardian [3] shows an old photo from California [4] about local mask mandates. 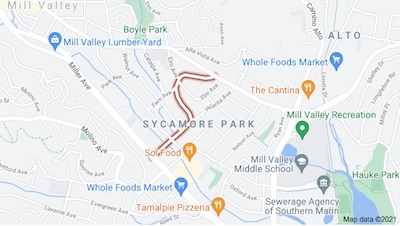 The data on the photo says it was taken 1918-Nov-03 by Raymond Coyne in Mill Valley, California on Locust Avenue. That street apparently still exists today, a bit over a century later. I just love historical detail like that, so we can get a sense of how real this was, a step closer to the ding an sich, with an emotional understanding that these were actual people.

Note that everybody’s masked in the photo and one is holding a sign saying, “WEAR A MASK OR GO TO JAIL”. So mask mandates were quite a controversial thing in those days, too. (Ok, the 4th from the left has her mask on below her nose, so that particular incompetence seems regrettably durable through history.) 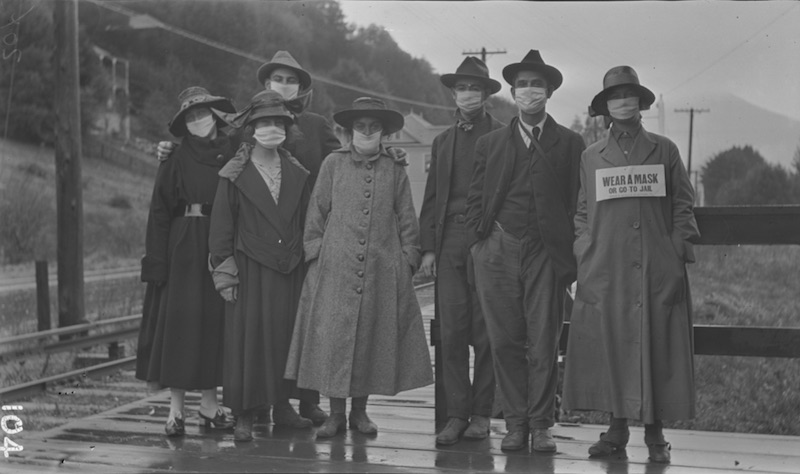 The partisan divide in drug repurposing 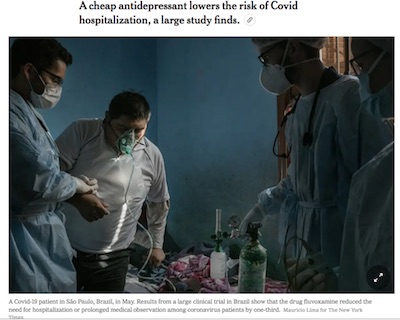 The right are bewilderingly fixated on mirages like hydroxychloroquine and ivermectin. Both are fine drugs in their usual places, but those places have nothing to do with COVID-19. In the case of ivermectin, the alleged positive studies seem to have been faked; the rest were either bungled designs or murky results. Yet, tribal identity…

Now, it’s not that drug repurposing is a bad idea. In fact, it’s a great idea to search the space of already-approved drugs with known safety profiles for activity in new situations. I had a project once called the “sleeping beauties” where we looked at all of our clinically proven-safe molecules to see if they had activities in other areas, especialy cancers. I even used to work for a company that had an ACE2 inhibitor that they could never quite figure out how to use. Eventually it was sold, but now that it’s known that SARS-CoV2 binds to the ACE2 receptor in the lungs, it’s suddenly very interesting. 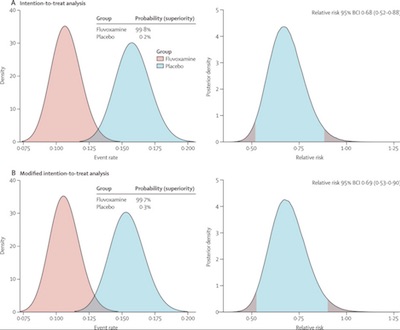 From the NYT comes news [5] of a paper in Lancet Global Health [6] of repurposing the anti-depressant fluvoxamine. It’s usually used for depression and OCD, but at higher doses it can quell the cytokine storm caused by COVID-19 (apparently it has a lot of off targets?). In this case, it reduced the need for hospitalization by 1/3. And a 10-day course costs $4, which is pretty good news.

They even did a pretty nice Bayesian analysis (under both ITT (top) and mITT (bottom) conditions) of the probability of infection for each arm of the trial (left), and the risk ratio (right). That’s exactly how I would have done it. I like these guys (just so you know my bias).

Just about the perfect example! In this regard, it’s a bit like dexamethasone, which helps similarly. (And not much at all like remdesivir, which was not approved & limited availability, has an incompletely understood safety profile, is hideously expensive, and didn’t work all that much.)

The thing about conspiracy theories is, they are generally false. Believing them about life-or-death matters can get you killed. 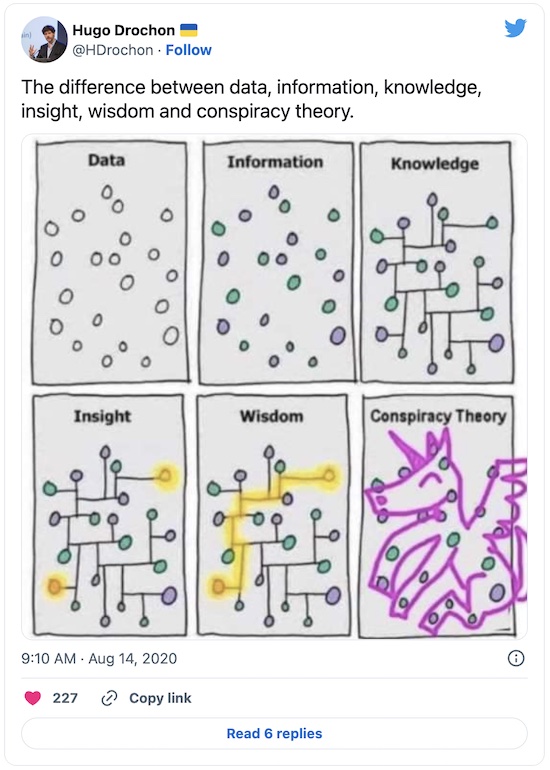 (NB: Drochon says he doesn’t remember the original source, just a “friend on FB”. But hey, if you’re the source, drop us a line and we’ll happily credit you!)

6: G Reis, et al., “Effect of early treatment with fluvoxamine on risk of emergency care and hospitalisation among patients with COVID-19: the TOGETHER randomised, platform clinical trial”, The Lancet Global Health, 2021-Oct-27. ↩