Vaccines are great, but now there are some exciting new treatments for COVID-19, in case you get a breakthrough infection (or made the wrong choice about accepting vaccination). Let’s look at how well they work, and what they might cost in comparison to other things.

A quick review of efficacy percentage and its confidence limits

We talk about efficacy of a vaccine or other treatment, as a number telling how much the risk of infection, hospitalization, or death is reduced, compared to the untreated popultion. In other words:

But that’s not quite the end of the story. Of course we’re estimating the probabilities here, by examining a finite number of patients. That means the efficacy is itself a random variable, which has some distribution due to measurement uncertainty and sample size. So we’d like also to know the 95% confidence limits (CL): what’s the lowest and highest it can be, such that we’re 95% confident the true value is inbetween? The lower confidence limit (LCL) is the 2.5% quantile, and the upper confidence limit (UCL) is the 97.5% quantile.

There are lots of ways of computing this, depending on how much modeling you want to do. My favorite, which I haven’t finished working on yet, involves the ratio of Beta-distributed variables as captured by a Gauss hypergeometric function ${}_2F_1()$.

But until that’s working, I’ll use some other methods in the R package gsDesign. The function ciBinomial() is all about confidence intervals involving binomially-distributed variables. You can see how the probabilities in the efficacy equation above can be viewed as scaled binomial variables (using the arm size as the scale). By telling ciBinomial() we want a risk ratio, we’ll get confidence limits on the efficacy.

We’ve packaged that up in a nice little script [1], which basically does:

to get the confidence limits.

But… disease happens. There are (rare) breakthrough COVID-19 infections in the vacccinatd, and (regrettably not rare) people who won’t get vaccinated. We’d like to be able to take good care of them, too. 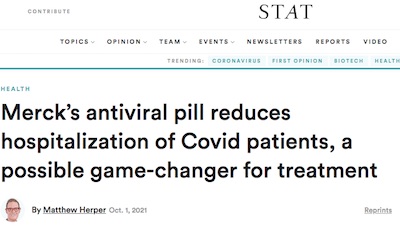 Let’s look at their efficacy numbers.

For molnupiravir, the total number of subjects and the number of hospitalizations in each arm of the trial were, as we determined approximately in a previous post:

For paxlovid, the numbers are a trial of very similar size, as reported in the WaPo [4]: 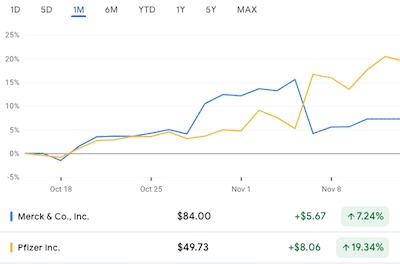 Look at what happened to the relative prices of Merck and Pfizer when this was announced last week. People aren’t stupid about this.

Both drugs are going to be good, and probably even better if used in combination, perhaps along with fluvoxamine. But paxlovid looks better for now, if you can only get one of them.

That’s an awful lot of powerfully positive protective mana barreling down the road at us.

We can prevent COVID-19 with vaccines (though we do need to learn how to persuade people to get vaccinated). Now we can treat COVID-19 if caught early enough, with at least 2 new drugs, in addition to the antibody infusions, dexamethasone, and so on.

Things are slowly getting better.

After some discussion in the comments over at TheZvi’s blog, we should also examine the death rates in the paxlovid trial.

The confusing thing here is that there were 0 deaths in the paxlovid arm vs 7 deaths in the control arm. That seems to lead to an efficacy vs death of 100%… which, understandably, people have trouble swallowing.

But with a 95% confidence limit of 46% – 100%?! From a Bayesian point of view, that very broad confidence interval (technically Bayesians would call it a “credibility interval”) means the posterior distribution of the efficacy is very, very wide. It is your warning that the trial isn’t really powered to report on the blessedly rare event of death. A very cautious person might conclude that death rates were reduced by at least 46%, probably more, maybe as much as 100%… but we can’t say with confidence exactly how much more.

Still, a worst case 46% reduction in death is a good result!