Somebody asked me about why the vaccines are high efficacy with rare breakthrough infections, but we can see a high fraction of the hospitalized are vaccinated? Right, very puzzling. Then somebody else asked me what I thought of an article about Simpson’s paradox in the context of COVID. Ding, ding, ding, ding!

Who asked what now?

Commenter Kto asked in a comment on Vaccine Efficacy, Delta Variant, and CDC changes about why we’re seeing reports of so many vaccinated people being hospitalized with COVID-19, if breakthrough infections are supposed to be so rare. I thought the Israeli and Qatari data said otherwise, but Kto produced a reference to some UK data that disagreed. Very puzzling…

Then Gary Cornell asked if I’d seen an article at COVID-19 Data Science on applying the Simpson paradox to explaining exactly that thing!

This is why you always listen to people.

Simpson’s paradox is one of those delightful and maddening things about statistics where you think there’s a clear conclusion, but when you look closer everything either falls apart or goes the other way. There’s an elementary introduction in Wikipedia that’s pretty good [1], and a more detailed technical summary in the Stanford Encyclopedia of Philosophy [2]. 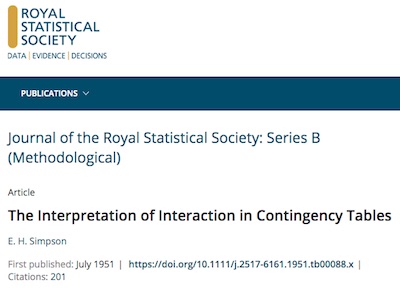 I’d always heard of this as the Yule-Simpson paradox, and wondered who the various people were. It turns out to be a fascinatingly weird bit of history: first published by Karl Pearson in 1899 [3], then by Yule in 1903 [4], it was more or less ignored or not understood for the next half century! When Simpson finally published about it in 1951 [5], it finally stuck in the minds of scientists. Moral: for anything that took the scientific community half a century to wrap their brains around, we should probably expect it to be a slippery little git that’s hard to understand.

Is that gonna stop us from trying? No, of course not.

For one thing, it’s important: Simpson’s paradox was at the root of a famous lawsuit alleging that Berkeley discriminated against women in grad school admissions [6]. While it’s a long and tangled tale, the gist seems to be:

People feel strongly about sex discrimination, and for excellent reasons. But if you don’t look at the details, you’ll see discrimination where there is none… and miss it where it really is. Neither mistake serves the interest of fairness.

Yeah, yeah… c’mon, what is it really? 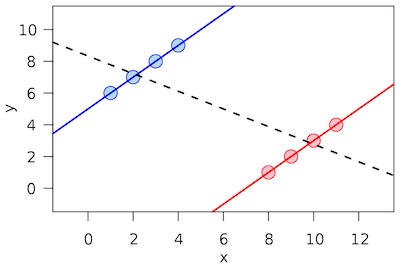 Consider this plot from the Wikipedia article.

But what’s that got to do with COVID-19 vaccination rates and hospitalization rates?

A brilliant article by Jeffry Morris at Covid-19 Data Science [7] looks at an apparent paradox: how can you say the vaccines are effective, when 60% of people hospitalized for COVID-19 are vaccinated?!

Let’s go through his paper in some detail, since it’s a very good invocation of Simpson’s paradox to explain why the vaccines work better than you think. Which is, after all, good news. And we can’t afford to pass up good news.

He’s aggregated data from the Israeli government dashboard, snapshotted below in the references. The part getting the nervous side-eye is the fraction of hospitalized patients who are vaccinated:

People jump, without justification, to 2 frightening but erroneous or irrelevant conclusions:

In some ways, this is just a basic blunder with Bayes Rule. They’ve computed the probability you were vaccinated, given that you’re already hospitalized: $\Pr(\mathrm{vax} | \mathrm{hospitalized})$. That is, very approximately, nonsense. The relevant thing to know is instead is the probabilty of getting hospitalized, given that you’re already vaccinated: $\Pr(\mathrm{hospitalized} | \mathrm{vax})$. The two are of course related by Bayes Rule, if you know the base rates of vaccination and hospitalization.

But there are 2 more serious errors that are at the root of Simpson’s paradox:

Adjusting for population sizes of vaccinated and unvaccinated

So first, let’s adjust for the population sizes of vaccinated and unvaccinated, and compute the probabilities, not the frequencies:

So we see that the fraction of population vaccinated is estimated as:

(The table above reports a slightly different number, because sometimes youths age 0-12 were not included, and the partially immunized with only 1 shot are not included. Details can be harmonized from Morris’s spreadsheet. But ballpark… 78% - 81%.) So there were a lot more vaccinated than unvaccinated people.

The probabilities we want are now calculable too:

That’s certainly better, now that we’ve properly normalized and computed the relevant probabilities… but not good enough yet!

Even though that looks much better after accounting for the much larger vaccinated population, it’s still way too pessimistic!

That’s because in the Israeli population, 2 things are true:

Rather than work through each row of a table of age strata with our own R scripts, let’s just jump to Morris’s very clear table. This is stratified by both vaccination status and by age. What can we see from it?

Conclusion: So we see that the hospitalization risk is mostly explained by age, once you properly normalize by the population sizes of vaccinated and unvaccinated. 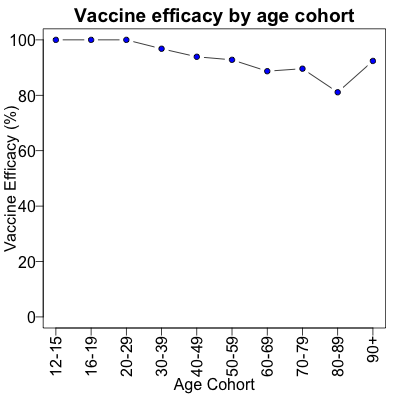 That doesn’t look so bad, now does it?

Simpson’s paradox is important: you will think your data means something other than the truth, if you attempt to ignore it! Here, the crucial fact is that age is correlated both with having been vaccinated and with likely to be hospitalized when infected.

This morning I woke to a New York Times newsletter touting an article [9] noting that vaccine efficacy isn’t really waning, it’s just Simpson’s paradox. This is very satisfying; the mainstream media are catching up, a bit.

Yet it would truly be proof of waning immunity only if the two groups — the winter and spring vaccine recipients — were otherwise similar to each other. If not, the other differences between them might be the real reason for the gap in the Covid rates.

As it turns out, the two groups were different. The first Israelis to have received the vaccine tended to be more affluent and educated. By coincidence, these same groups later were among the first exposed to the Delta variant, perhaps because they were more likely to travel. Their higher infection rate may have stemmed from the new risks they were taking, not any change in their vaccine protection.

Statisticians have a name for this possibility — when topline statistics point to a false conclusion that disappears when you examine subgroups. It’s called Simpson’s Paradox.

This paradox may also explain some of the U.S. data that the C.D.C. has cited to justify booster shots. Many Americans began to resume more indoor activities this spring. That more were getting Covid may reflect their newfound Covid exposure (as well as the arrival of Delta), rather than any waning of immunity over time.

I was gratified to see another piece in the WaPo on the subject, this time by prominent mathematician Jordan Ellenberg. [10] I don’t know him personally, but know people who know him and by reputation. His reputation is that he is very smart, very careful, and a remarkably good person. I particularly liked the shout-out to his mom, who pointed him at Morris’s blog post.

Simpson’s paradox is a warning that the whole of the data often looks weirdly different than the sum of its parts. In the case of Israel — as a number of epidemiologists and other scholars have pointed out — what explains the surprising hospitalization figures is largely the relative ages of vaccinated and unvaccinated people.
…
If everyone were vaccinated, then all hospitalized people would be vaccinated – and that obviously wouldn’t mean vaccination was useless. 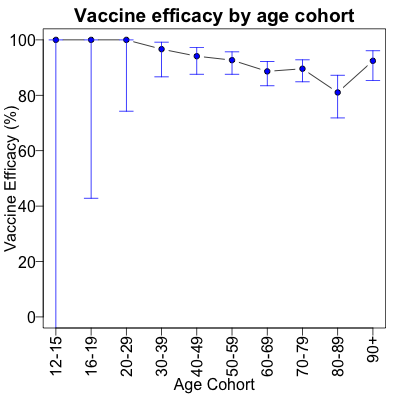 I just realized that we can take Morris’s spreadsheet and extract the Israeli population counts, stratified by age and vaccination status. That’s important because we can calculate the vaccine efficacies ab initio, along with their confidence intervals. So I did that, with a little R script. [11]

Note that the calculation of the confidence intervals has a few problems when one of the arms has 0 infections: in those cases – check the first 3 rows of the table – the infection counts in both arms are so low we can’t achieve statistical significance. It’s very hard to get confidence intervals on rare events, because you have to take astronomically large numbers of observations to make the rare events happen enough times! So don’t take seriously the wide confidence intervals when the efficacy is 100%.

Here’s the resulting plot. Other than the silly-wide CI’s at 100% efficacy, you can see that the vaccines remain strong across all ages, and that we are quite certain that is the case.

Simpson’s paradox is really, really misleading people here. There may be arguments for a booster shot, but apparently these data are not one of those arguments. 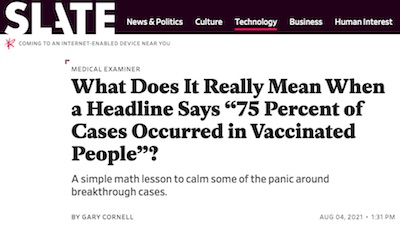 Mathematician & publisher Gary Cornell had a piece related to this on his blog, about how the base rate fallacy is tripping people up here. Basically, don’t ignore the background rate at which something happens in favor of compelling foreground anecdotes! It’s from before we’d figured out that Simpson’s paradox was active here, but it does point out the normalization problem.

A revised & extended version of that has been published in Slate. [12] It’s worth your time to read. In a way, it points out how meaning-free it is to say “75% of those hospitalized for COVID were vaccinated”. It’s the Bayesian error we pointed out above: knowing $\Pr(\mathrm{vax} | \mathrm{hospitalized})$ is useless, but knowing $\Pr(\mathrm{hospitalized} | \mathrm{vax})$ is usefully predictive.

Transforming from one to the other with Bayes’ Rule requires knowing the base rates, $\Pr(\mathrm{vax})$ and $\Pr(\mathrm{hospitalized})$. Simpson’s paradox comes in after that, because both of those are related to age.

Are we getting through, here?

7: J Morris, “Israeli data: How can efficacy vs. severe disease be strong when 60% of hospitalized are vaccinated?”, Covid-19 Data Science, 2021-Aug-17. I’ve snapshotted his aggregated, translated, and normalized data from the Israeli government data dashboard on 2021-Aug-15 here. ↩

11: Weekend Editor, “R script to plot normalized, stratified Israeli vaccine efficacies and confidence intervals”, Some Weekend Reading blog, 2021-Aug-29. The tab-separated value file used as an input was derived from Morris’s data. There is also a transcript of running the script. ↩