Charles Gaba has updated his county-level COVID-19 vax rates and death rates, versus percentage of Trump voters. It’s not pretty.

Last April, we did some regressions of state vaccination rates on state % Trump margins. It showed a depressingly statistically significant result: Trump states were not only less vaccinated, they weren’t even using the doses they had, back when they were scarce.

Then last July, Charles Gaba on acasignups.net showed the horrifying county-level data. The county level data was difficult to assemble properly and completely, but the trend of Trumpiness against vaccination was blunt and clear.

Then at the end of October, Gaba updated with a simple bar plot: stratify counties by deciles of % Trump voters and see the death rate in the most Republican is 6x higher than the most Democratic.

Now he’s updated to the latest data, in both vax rates and death rates. Oy, vey.

The ugliness of the present moment 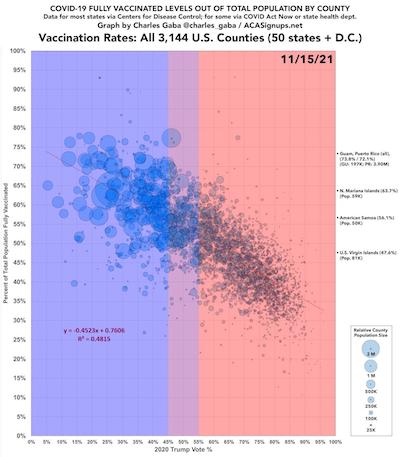 First, consider the 2021-Nov-15 update on county vaccination levels vs county % Trump votes. [1] We can see several interesting things from this plot of 3,144 US counties: 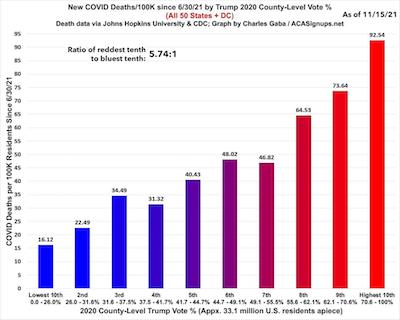 Next, let’s look at COVID death rates in a simple bar chart [2]: divide up the counties into deciles by % Trump vote, then plot the death rate per 100,000 for each. Color them by voting status, and observe the trend: 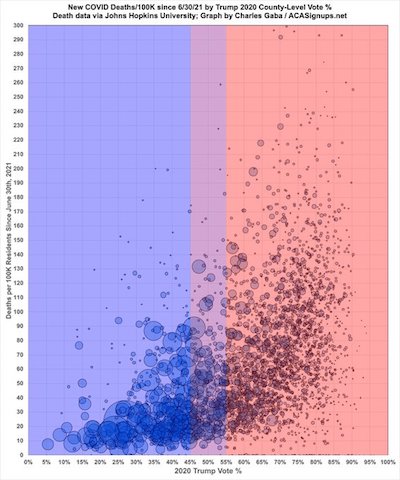 Finally, and most devastatingly, consider the vax rate scatterplot above, but now redo it wit the COVID-19 death rate. [3] These data are through 2021-Nov-12:

Being Republican is hazardous to your health. And your neighbor’s health.

I was actually thinking of a Box-Cox transformation, one special case of which is a log transform. Then optimize for the $\chi^2$ of a linear fit to choose the optimal parameter in the B-C transform.

Also, sometimes it’s useful to do a rank parametric statistic on the untransformed data, to be sure any result is not an artifact of transformation. So that’s why I wanted a Spearman correlation.

But it seems Gaba hasn’t released the raw data. Given how hard it is to collect, he may not want to. I guess I could ask him.