It's Always Been 2 Americas for COVID-19

COVID-19 has brought to light a lot of disparities in the US. Today’s scientific paper is about just how certainly we know the Trumpy parts of the country, especially the South, were COVID-19 disasters: hundreds of thousands of excess deaths due to mask defiance, vaccine refusal, and malign conservative disinformation.

The choice of paper for today’s JournalClub started with a tweet. I don’t use Twitter, nor do I tolerate much about it. (I hear some unpleasant rich dudebro bought it. But I hated Twitter before it was fashionable to hate Twitter! Just a fashion-forward curmudgeon, that’s me.) Still, somebody saw the tweet, pointed somebody else at it, who then pointed me at it.

And so, here we are, as all the existentialists say.

(Or: “And so it goes”, in the malebolge of social media.) 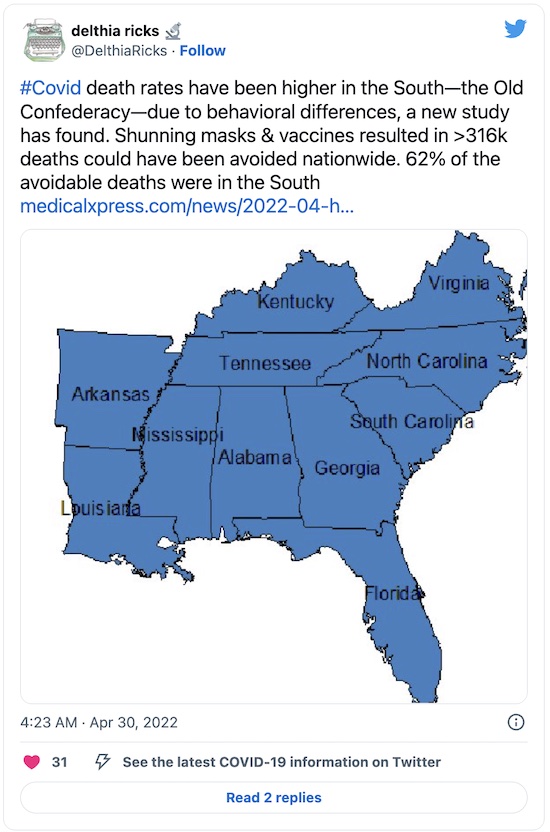 That certainly sounds interesting, and indeed in line with some of our own work on state-level voting patterns and vaccine uptake as well as the spectacular county-level data analyzed by Charles Gaba. But now we’re talking peer-reviewed scientific journal papers, use of excess mortality instead of wildly inaccurate/delayed death reports, and all that. What’s the source?

The tweet itself points us at a short article in Medical Xpress [1], which frankly reads more like a press release from the Georgetown University Medical Center. I mean, it’s not exactly wrong, but it is cheerleading.

Fortunately they planted enough clues (though not a URL!) to track down the article in PLoS ONE by a crew from Georgetown. [2]

(Disclosure: Once upon a time, I was a referee who peer-reviewed a couple papers in PLoS ONE. But it was only a couple times, and it was almost 2 decades ago. Can you forgive me?)

Let’s look through the paper!

A read-through of the paper

The general situation is, appropriately enough, summarized in the abstract of the paper:

There’s a lot of technique behind the paper, only glancingly mentioned in the text.

For example, they used “Farrington surveillance algorithms, which use over-dispersed Poisson generalized linear models with spline terms to model trends in counts, accounting for seasonality,” but sadly showed no equations in the paper itself. I’m not going to dive into the math behind that just to guess at what they might have done, so instead I’ll just spot them the usual credit for having cleaned up their data appropriately, with standard algorithms.

Their references are also fascinating, such as how exactly they sourced their excess mortality data from the CDC. I won’t go into that here, but if you’re a data junkie (and you know who you are!) then this is a good paper to mine. 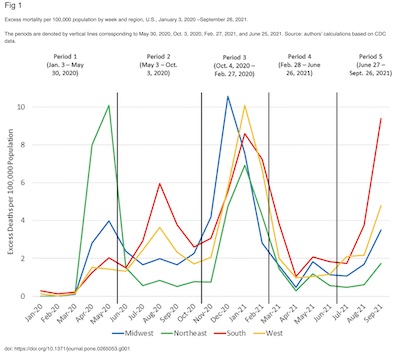 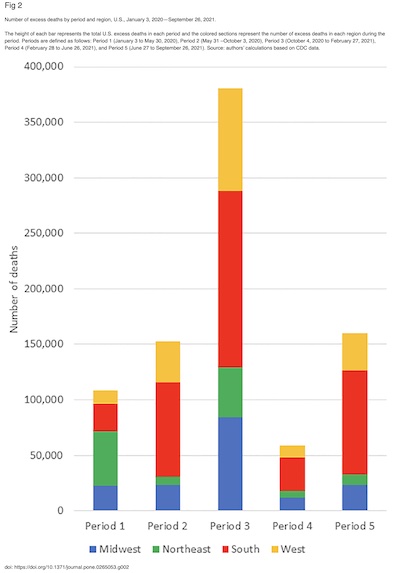 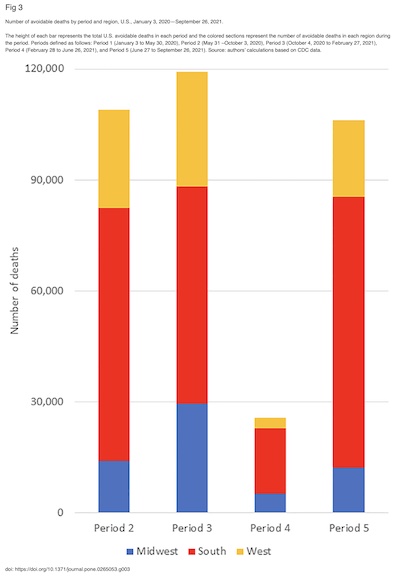 Now let’s have a look at their figures, reproduced here. (Click to embiggen.)

While the authors wisely (and delicately) refrained from attributing this difference to anything in particular, surely we all cannot help but notice the rampant disinformation, denial that COVID-19 is real, mask defiance, and vaccine refusal as possible causes.

You might, with some reason, accuse me of being a proud New Englander. The Northeast is my home, for 45+ years now. I am happy to live here. As a card-carrying member of the classic “liberal intellectual East Coast elite”, I’m not particularly happy about the South and its politics. But I do not want those people to die!

Add up the butcher’s bill: 316,234 avoidable deaths, 62% of which were in the South. That’s 316,234 * 0.62 = 196,065 dead Southerners, victims of their malign conservative governments and outright disinformation & superstition. 196,065 Southerners would have lived and not died, had their governments only encouraged the COVID-19 policies of the Northeast.

Add to that the rampant under-reporting of COVID-19 deaths in the South, as evidenced by the excess mortality model’s higher numbers than the deaths “officially” reported as COVID-19.

The conservative policies of the South and other red areas of the US killed their own citizens. And then their institutions lied about it, by under-reporting COVID-19 deaths.

I may not love the South, and Southerners may not love me. But nobody deserves that! (Hey, quiz question: if a political party murders your cohort and then lies to you about it, should you respect them and vote for them?)

I love Southerners enough that I want them to live, and not die.

There’s also my personal marked-up PDF, if for some reason you’re curious about what I highlighted on my first read-through. ↩