It’s been a month since we were exposed to COVID-19 here at Château Weekend, testing positive 2 days later. Surely it must all be over, right? Right? Ahem.

The sound of fat ladies not quite singing

Fat ladies are not, as yet, singing. Or at least, they are singing very softly.

Yes, we both test negative. Yes, symptoms have largely abated. But we’re both weak as kittens, and get utterly, deathly tired & achy & crabby by mid-afternoon. Not just “tired”, but having actual difficulty cooking dinner because even standing up to eat feels like a lot of work.

While we’re not totally incapacitated, having to work for a living would be difficult. Fortunately, your humble Weekend Editor is retired, and the Weekend Editrix works mostly from home. There are a number of blog posts that should have happened, except I can’t do anything other than sit and stare at a wall after 2pm.

But… things are getting better. Slowly.

Other things that are getting better

The world is still in the grips of climate change causing droughts severe enough to make parts of even the developed world uninhabitable. The incredibly stupid Russian invasion of Ukraine continues insensibly. The world slouches toward fascism. Trump is not yet indicted, let alone imprisoned.

So yeah, we got problems.

But at least a couple things are going well, or at least in the right direction: 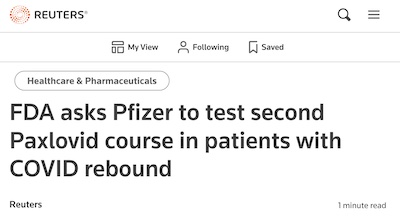 So, at least a couple things are headed in the right direction.

Now if only we can blow up enough Russian military equipment, indict/try/convict Trump and his Republican enablers, keep the House for the Democrats & add 2 vertebrate Democrats to the Senate to neuter Senators Manchin & Sinema [4], then we’ll be in a position to make some real progress. For the first time in many years.

4: Am I the only one who longs to merge “Manchin” and “Sinema” into “machinima” and hope for a brilliantly satirical animation?

BA.4 and BA.5 have very similar spike proteins, sharing mutations at L452R and F486V. BTW, thanks for your blog and for posting your experiences.

First, welcome to the Weekend Commentariat!

Second, thanks for the info on the BA.4 and BA.5 spike proteins. This would explain why people always say “BA.4/5” (other than just sloppy terminology). Still, they’re not identical, so I wonder which one is in the vaccine or if they used both?

I appreciate your diligence in digging this up for me. Normally, I’d just say I was being lazy. But the post-COVID-19 fatigue and (essentially) brain fog have really slowed me down. So glad to hear someone’s checking the details for me.