Coronavirus & Elections: The Winter of Our Discontent

The election is coming, with a possibility of right-wing violence and subversion. COVID-19 is forming up for another wave of infections. Winter is coming. It’s terrifying, but there are some things you can do.

There’s an election happening now in the US, coming to a climax tomorrow. Perhaps you’ve noticed? It’s probably the most important election since the American Civil War. It’s important that you vote (and that you not vote Republican for any office whatsoever: that would just be enabling the bad guys).

Here at Chez Weekend, our vote is already submitted to the town clerk’s drop box, and verified as “accepted for counting” from the secretary of state’s web site. Please do the same: either drop off your ballet with your local ballot counting office (not at the now criminally-impaired Post Office! [1]), or vote in person if you have to. Scalzi has a nice summary over at Whatever. 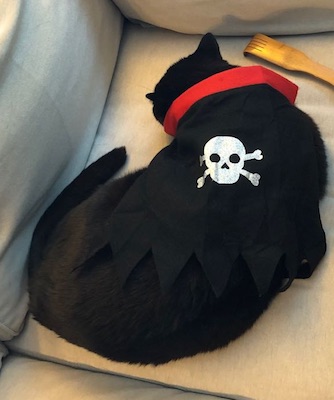 Especially the last part from Scalzi: “Thank you for your attention. Here’s a picture of a cat.” In that spirit, here’s a picture of the Weekend Publisher, in his full Hallowe’en regalia. Don’t you just get a contact high from all the enthusiasm wafting off him?

But: for the first time in my long(ish) life in the US, I fear some post-election political violence. It almost happened in 2000, when demonstrators in Florida prevented the recount from proceeding until the Supreme Court could peremptorily hand the election to the Republicans. Now, it’s even worse: Trump pretty much promises post-election chaos: legal challenges, telling the Proud Boys they have free reign for violence, threatening to cling to power if he loses, etc. It’s a good time to take a couple days off work, so you can either stay home or demonstrate (peacefully). This is not going to be trivial.

“A little patience, and we shall see the reign of witches pass over, their spells dissolve, and the people, recovering their true sight, restore their government to its true principles.” — Thomas Jefferson in 1798, after the passage of the Alien and Sedition Acts

Coronavirus and the winter wave 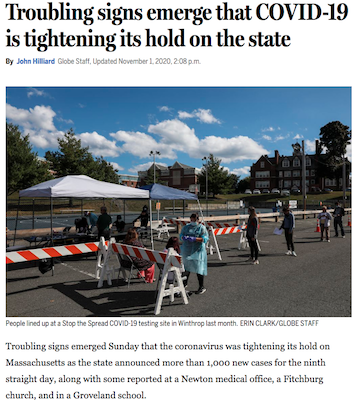 As if the non-stop horrors of right-wing political nihilism and stupidity for the last generation were not enough, COVID-19 is also ramping back up.

Submitted for your approval: the venerable Boston Globe today, in an article by John Hilliard (reference 1), points out that Massachusetts is now reporting more than 1,000 new cases/day, for the 9th straight day.

There have been an awful lot of exceptionally stupid parties in student-heavy Boston, home gatherings spreading virus inter familia, a demented policy allowing indoor dining at restaurants, as well as church gatherings where a sociopathic regard for belief allows a refusal to believe the virus affects the worshippers or that they affect anyone else. (Don’t be the sociopath in your circle, ok? Also, don’t vote for the sociopath.) 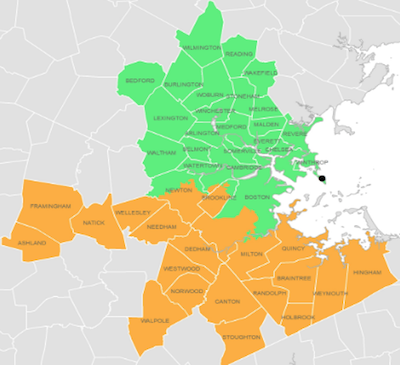 Strike 2 is from the Massachusetts Water Resources Authority (MWRA). They basically run the water supply, the Quabbin Reservoir, and a really interesting wastewater treatment plant on Deer Island. The processing is done separately for northern and southern metro Boston and semi-adjacent suburbs, reacing out quite a ways (green & orange in the figure). It serves 43 communities!

The MWRA folks did something really clever: partnering with Biobot Analytics, they applied metagenomics to the wastewater, and using RNA sequencing to track the amount of SARS-COV-2 viral RNA versus time. This is as unbiased a sample as it’s possible to get: if you use a toilet in (extended-)metro Boston, you’re part of the sample set. Back in August, the venerable Globe reported that there were some suspicions of an uptick (reference 2), presaging an uptick in cases, then hospitalizations, then deaths. I didn’t make much of it at the time, since it didn’t look statistically significant — likely noise.

I was right about that being noise, back in August. I was wrong in thinking that there would be no problem later. 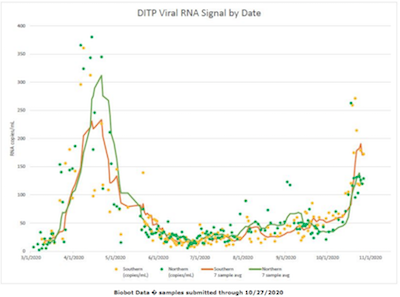 Look at the latest results on the MWRA web page (reference 3). While the uptick in August was more or less pure statistical nonsense, what we see today is obviously a second wave: currently about half the height of the first wave in April, but rising at a slope equal to or arguably steeper than the first wave. [2]

What this predicts: in a couple of weeks, there will be a desperate tsunami of hospitalizations, followed by a miserable wave of deaths. [3] Other areas will have other indicators, and perhaps differences of timing. But if even Massachusetts, where you can get yelled at for not wearing a mask in public, has this problem… just imagine what’s in store for the states where they still (somehow!) don’t believe masks work, or that the pandemic is real.

David Malki has the goods on my cynicism about our proudly fact-defying ignorance: 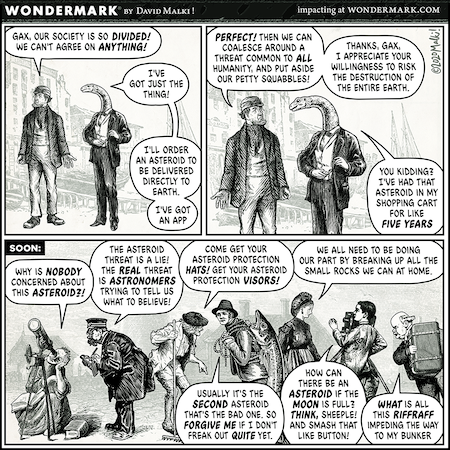 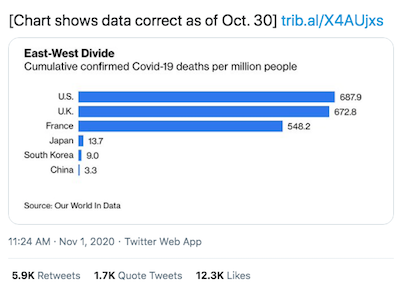 Strike 3 is that it didn’t have to be this bad! Bloomberg Opinion has a nice tweet thread showing that some eastern countries have a remarkably low COVID-19 death rate, while the US & Europe are correspondingly miserable. (reference 4)

You cannot argue that the eastern countries are uniquely positioned geographically (though with New Zealand one can note that it’s easy to close the borders of an island; also Taiwan). Usually, Bloomberg Opinion goes on to note, we explain that with what amounts to a rather dreary colonial attitude of orientalism: their culture is so different, they can do things we never would do. This is a form of cultural essentialism, basically asserting that cultural differences are the only thing worth attention. It saves you the trouble of examining your own behavior for faults, apparently.

In fact, while waiting for a vaccine, we can do what they did:

We did none of that: testing was almost impossible to obtain (and in fact discouraged by the Trump government!), results became available weeks later when they were useless, there was almost no contact tracing, exactly zero support for quarantinees. In fact, we resisted doing even simple things like wearing masks.

But don’t ignore the better news from Asia: until there’s a vaccine, control of the virus is possible. We just have to muster up enough spirit of cooperation to do it. (But… we probably won’t, says my inner cynic.)

What you can do

Look, winter is coming. [4] People will be stuck indoors, in close proximity, with poor ventilation. There may be right-wing violence in the streets after the election, which will further drive us to take shelter together. That’s a recipe for disaster in many ways, but one of those ways is COVID-19 transmission.

So what can you do about it? Several things: 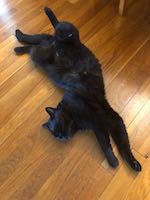 Then you can relax at least a little bit. Maybe.

None of us, of course, will be able to relax as fully and regularly as the Weekend Publisher, shown here exhibiting his skills. He is, after all, a master of the art. Perhaps we can “build back better”, in Biden’s parlance, a society where we can all provide safety and care for each other, to feel as safe and warm and confident as the Weekend Publisher? I hope so. That’s my dream, anyway.

1: Too much Republican mischief at the Post Office: 72% of the mail sorting machines removed “for cost savings” were in counties won by Clinton in the last election, according to a federal court finding. So… it’s deliberate.↩

2: It would be fascinating to do some sort of time series model relating hospitalization rates each week to viral RNA levels in wastewater in preceeding weeks. Either a simple regression model, or maybe an ARMA(p, q) model. Maybe in another post, we’ll explore how quantitatively predictive this data is. ↩

3: Though, to be fair, the death rate seems to have been declining. I attribute this to (a) some clinical learning in how to treat COVID-19 patients (dexamethasone, remdesivir, ventilation in prone position, …) and (b) the patient population has changed. Most of the elderly are scared away from going in public much, and with the start of the fall college semester, we’re getting a lot of young, healthy people doing dumb things. Their death rate is lower, so they may survive personally. But not without spraying virus to all they contact, including elderly or otherwise at-risk family members, teachers, bus drivers, grocery workers, and others. So don’t applaud the lower death rate yet. ↩

4: I am apparently the last remaining human on the planet who has not watched the US televsion show Game of Thrones. I gather the phrase “winter is coming” has something to do with that. Me, I just like winter. ↩

Thank you for this!

↪︎ Reply to David Pablo Cohn
Comments for this post are closed.