Today the Weekend Editrix got shot for the 7th time in the trailing 12 months, having gotten her 2nd booster for COVID-19.

Your humble Weekend Editor got his 2nd booster a few weeks ago on April Fool’s Day. Today the Weekend Editrix, having returned from Japan and de-jet-lagged a bit, got hers.

Herewith the now-canonical jab shot. (And check out the first metacarpal on the pharmacist! She’s been doing this for a good long while, now.) 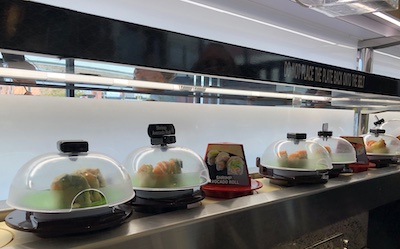 In order to celebrate her boostage (and, for that matter, her safe return from Japan) we went out for sushi. In fact, kaiten zushi (conveyor belt sushi), with robot table service for drinks. Any special orders arrive at your table via the high-speed conveyor belt at the top; the lower speed conveyor belt shows you all sorts of goodies which you just grab as they go by. A tablet above all this lets you make special orders or drinks; the drinks are delivered by robot. You can also give the robot any waste, like paper wrappers of various sorts.

(Yes, I ordered a glass of ice water just to photograph the robot. No, it did not cost any extra. Yes, I drank the ice water. Don’t judge me.)

It was remarkably free from human interaction other than of the Editor/Editrix sort. That includes ordering specials, counting plates, and checkout using a smartphone. Appropriate for a pandemic, even if it’s (possibly) in its final phases. (Leonhardt was right: the ‘very liberal’ are worried about COVID-19, and I am very liberal. But he was also wrong, in that our worry is not unfounded.) The staff were masked; the patrons largely were not.

Oh, and you still have to tip, despite the lack of humans delivering food to your table. It apparently goes to the staff as a whole: somebody cleans off the table, loads up the robot, puts together the sushi, fills the conveyor belt, cleans the joint, etc.

Still, it was fun and we’ll definitely go back. We’re still working through the process of lowering our pandemic defenses.