Japan's Shionogi Ltd. Has Another COVID-19 Antiviral in Late-Stage Trials

Some good news: there’s now another COVID-19 antiviral drug candidate that has the same target as paxlovid in late clinical trials.

Reuters reported yesterday [1] that the Japanese pharmaceutical company Shionogi has some results from a COVID-19 antiviral therapy, currently in Phase 2/3. Known variously by its internal id, generic name, and commercial name as S-217622, ensitrelvir, or Xocova, it apparently showed rapid clearance of virus. It apparently shortened the time course of disease, but didn’t alter symptoms much in the short run, which sounds odd.

Reluctantly digging into the Shionogi press release [2] (despite our aversion to corporate press releases), we find that the results were presented at a conference, the 32nd European Congress of Clinical Microbiology & Infectious Diseases (ECCMID) in Lisbon, 23 – 26 April reporting the Phase 2/3 trial results:

A Phase 3 trial [3] is in progress: NCT05305547, apparently known as SCORPIO-HR, because all clinical trials must by law have a cute but irrelevant mnemonic. 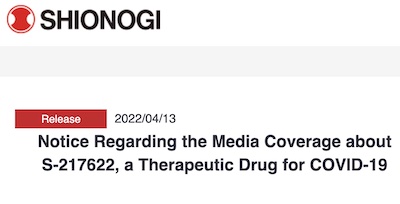 Of course, it’s not all roses. Inevitably, some Nimrod decided that there might be evidence of fetal skeletal abnormalities in pregnant people. [4] According to Reuters, that drove the stock price down 16%. So the company politely pointed out that:

So… basically irrelevant as far as actual humans are concerned.

Some thoughts on the mechanism 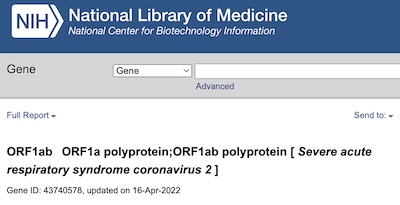 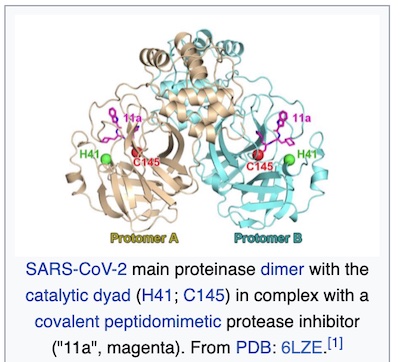 The mechanism is apparently the same mechanism as nirmatrelvir, one of the 2 components of paxlovid.

Basically, many viruses, including coronaviruses, have a giant gene called ORF1ab. (“ORF” stands for “Open Reading Frame”, which is a genetic pattern signalling that a gene starts here.) Unlike most genes, this makes a polyprotein: several proteins strung together in a long string of amino acids.

Since it can’t function like that, it has to be snipped up into pieces that form the individual functional proteins. That’s the function of a protease (the “ase” ending indicates an enzyme, i.e., a protein that acts in some other chemical reaction, here like snipping up a polyprotein). The protease in question is 3C-like protease/3CLpro/Mpro: gum this up, and ORF1ab can’t make several proteins crucial to viral reproduction. 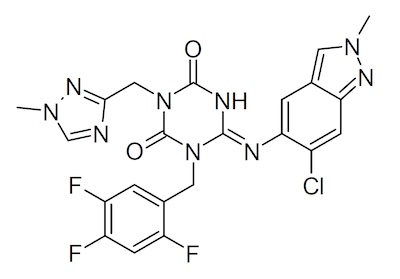 So Shionogi’s scientists came up with ensitrelvir, shown here. (Compare with the structure of nirmatrelvir in paxlovid.)

It messes up the function of 3CLpro, so it can’t cleave the output of ORF1ab, and several crucial viral proteins can’t be made. The nice bit is that there is no human 3CLpro, so you’ve got a nice wide dose window before you start hitting human proteins off-target.

So why bother making another paxlovid? At least 2 reasons:

Still, it won’t be up for approval until later this year. 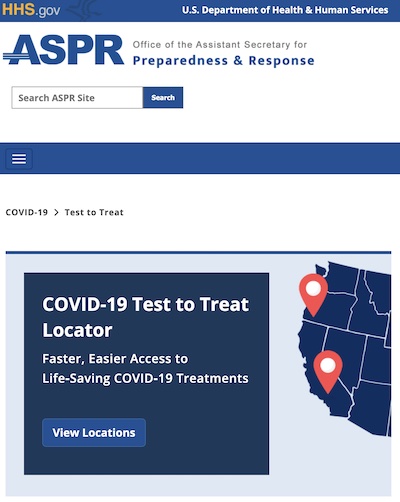 In the meantime, should you find yourself so unfortunate as to test positive for COVID-19 or even have symptoms, see your doc immediately and ask about either paxlovid or a monoclonal antibody infusion of bebtelovimab (the one that still works against Omicron).

If you have trouble finding paxlovid or somebody willing to write a scrip for it, use the federal test-to-treat program: you show up, get tested, and if positive get prescribed. The US Federal test-to-treat locator [5] will help you find a place to do that.

It just now found 305 locations within 10 miles of Chez Weekend, outside Boston. That’s a target-rich environment, but you should be able to find something nearby in most areas in the US with reasonable population density.