Another calendar year down; also another annus horribilis. Let’s review what happened in this Crummy Little Blog That Nobody Reads (CLBTNR), and studiously avoid the more daunting task of reviewing 2022.

Yes, it’s been that long. A combination of depression and post-COVID-19 brain fog (still lingering from last summer) has made everything hard. And I mean everything.

Trust me, I’ve got browser windows full of tabs of references on things about which I want to write. Or more correctly, want to have written, the actual writing being a bit beyond my capabilities at the moment.

And the comments are still disabled. I could follow the detailed Staticman tutorial to get it hosted on Heroku. But when Heroku folded their free accounts, there were only vague assertions about how it was doable on other hosting services. Yes, if you’re a full-time cloud-computing person, that’s enough. But if you’re not, there’s a lot of figuring out to do… and my figure-outer is on the fritz.

In the meantime, there is, and always has been, an email link at the top of every page (the little envelope hieroglyph).

Still, there’s some medication that might kick in any day now. And the brain fog lifts after a median time of 6-9 months, which means February to May.

It would be nice not to have to rely on brute-force stubbornness so much, wouldn’t it?

When the geeks count time by the kalends

(Yes, I’m going to repeat that sub-titular joke every year until somebody gets it. Probably even after that.)

According to the TimeAndDate.com duration calculator, 914 days have elapsed total, 365 of which were in calendar 2022 proper. (Or 78,969,600 seconds. I remember in my early 30s when I realized I was a bit over 1 gigasecond old. That mattered more to me than turning 30. Aging to 2 gigaseconds in my sixties was less of a big deal. Making it to 3 gigaseconds is not impossible, but low probability.) So we’ve been writing this Crummy Little Blog That Nobody Reads for almost exactly 2 1/2 years:

The year-end is a time for retrospection and introspection. And since it’s the bi-sesqui-blogiversary, let’s see how things have gone. For that purpose, I’ve written a little R script to analyze post/comment/hit statistics and test for trends over time, the relationship between comments and hit counts, etc. [1] (Excluding this post itself, of course, for obvious reasons!) It’s been revised extensively since last year, e.g., with distribution modeling for the hits per post, q.v.

The results of this script (transcript and spreadsheet) are available in the Notes & References below for all 30 months as an omnibus dataset. [2] In my (mildly) cognitively diminished state, I’m not up to doing the year-by-year breakdowns.

Frequencies of posts, comments, and hits

So first let’s use the script’s output (saved in spreadsheets in the Notes & References) to get an idea of how many posts and comments there were in 2020 and 2021, and some idea of the average rate. From the transcript, we can extract the nifty little table shown here.

Conclusion: This is still a blog you can keep up with by reading once a week. Also, for some mysterious reason I get more comments via email than the comment system (when it’s working, of course!).

Hits and comments in relation to time

That’s been mostly about writing posts. What about reading?

To investigate readership, we’ll next look at the post hits vs time (regrettably including my own looking at the posts searching for errors and things to rephrase), and comments vs time.

This year, though, we’ve done a bit of distributional modeling of the hits per post. Shown here is the histogram of hits, showing the dominance of low-hit posts along with a long tail of outliers that somehow got more exposure. We’ve overplotted that with best-fit distributions (using the fitdistrplus package in R).

We’ve characterized each candidate distribution by the Bayes Information Criterion (BIC) for how well it fits the data. This is a parameter-penalized negtative log likelihood, i.e., it accounts for how many parameters you spend on complexity and rewards you for having better log likelihood. Smaller is better.

Now… you’re not supposed to do this!

Shopping for distributions, even with an appropriately penalized likelihood like BIC, is a no-no. I should build a probabilistic model of how hits arrive, and fit that rather than just trying easy things. But that’s hard: recent posts are exposed to the web for less time, early posts were mosty unread except for people now looking through my back-catalog, and so on. So I’m going to grit my teeth here and be empirical at the expense of principle, something that kind of grates on my brain.

I decided to salve my conscience by testing all distributions that had reasonable properties were feasibly available to me:

The obvious candidates were lognormal, Gamma, negbinomial, Weibull, and Poisson. A few others were easily available, but I ruled them out based on the criteria above: 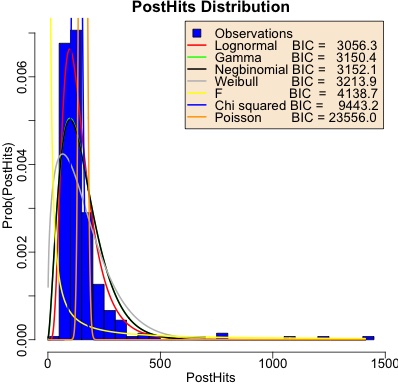 After a bit of a wrestle, I was able to guess optimizer starting values for the $F$ and $\chi^2$ distributions as well, though the resulting fit parameters look pretty absurd. Going down the list in order of increasing BIC (i.e., from best to worst): 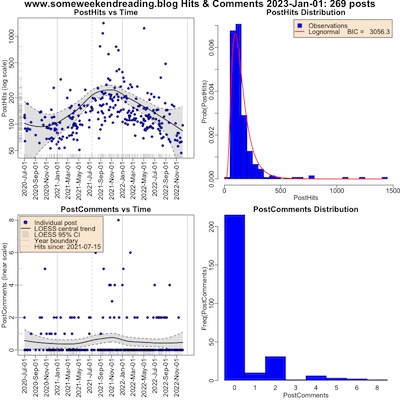 Here’s the hits vs time and comments vs time for the last 2.5 years (click to embiggen). The 4 plots are:

Conclusion: Still a crummy little blog that nobody reads, unless I write about an FDA hearing for medications against life-threatening pandemic diseases, and advertise that fact in the comments section of a high-traffic blog.

Again we entertain the hypothesis that posts with more hits might get more comments, though this year that (putative) relationship is likely disrupted by the comments being broken for more than a month. Still, let’s examine the unsupervised bicluster and the supervised semi-log regression we did last year. 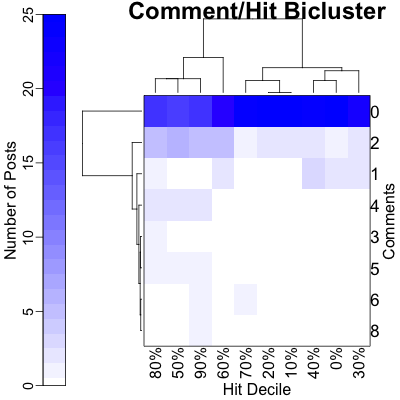 To investigate such a relationship in 2021, we’ll first do an exploratory bicluster of comment counts vs hit counts (top figure), and then a linear-log regression of comments on log hits.

It seems clear that a naïve linear model is still useless here. While the nonzero comment points may have a mild trend, the 0 point comments drag the regresion into sillyspace. Perhaps something like tobit regression would be more appropriate?

But if we back up a bit and try to be a little less model-based, we find that there is a statistically significant relationship between hits and comments, both numerical Pearson correlation and rank Speaerman correlation:

Both have nice $p$-values, but small(ish) correlations. So that’s consistent with a real, but weak relationship.

Conclusion: Most posts get 0 comments. While there is statistical significance to a putative comment/hit relationship, the strength of prediction is essentially nothing. A more signficant model involving cutoffs, like tobit regression, will be fun to explore at in year-end post for… some future year.

The boring nature of spam and the (blessedly infrequent) nastygrams

There’s still lots of spam, mostly in Russian. I haven’t broken it down by year (perhaps I will do so next year?), but overall nearly every comment submitted is spam. Of course, having the comment system break was a particularly strong response to spam!

So the detailed comment source analysis of previous years is probably not apt here.

Google search console and its discontents

We have a pretty low click-through rate of 2.2%, which means as far as Google searchers are concerned, this really is a crummy little blog that nobody reads. Also, our rank in Google searches averages to about 33, i.e., on the 2nd page of hits where practically nobody ever looks. And I’m still ok with that.

As with last year, most of the clicks were from the Anglosphere, plus a long tail of everywhere else. Where are my French former colleagues?!

By device, there were about 3.75x more desktops than mobile, and just a couple of tablets. While technically this CLBTNR obeys the “rules” of being mobile-friendly, it sure looks better on a bigger screen.

The top 2 queries – the only ones to make it out of single digits – were “yle editrix” and “ratio of two beta distributions”.

Well, at least one of them makes sense this year!

The outside link report is largely unchanged from last year: most places link to the front page of the blog, unsurprisingly. The sources of those links are about the same, too: places in the comments sections of other blogs where I’ve dropped a pointer.

All in all, not that much change (other than messed-up comments which my messed-up brain has not yet fixed).

Thanks to my readers, all 6 or so of you!