COVID-19 has taught us some lessons about (a) how mind-numbingly stupid and corrupt we can be, and (b) some forms of corruption that are so confusing that I can’t tell if they are the divine madness or instead just &Gammad;ΤΦ.

Some people react to stress with corruption

There’s no question COVID-19 had stressed us all. And by all, I mean humanity, not just Americans. People respond to stress in different ways: sometimes admirably rising to the occasion, and sometimes descending into chaos and corruption.

Today some examples of the latter slithered into my awareness.

Lesson 1: Why are all the ivermectin studies misdesigned, inconclusive, or outright fakes?

Ashish Jha, Dean of the Brown University School of Public Health, has an interesting question for us today: 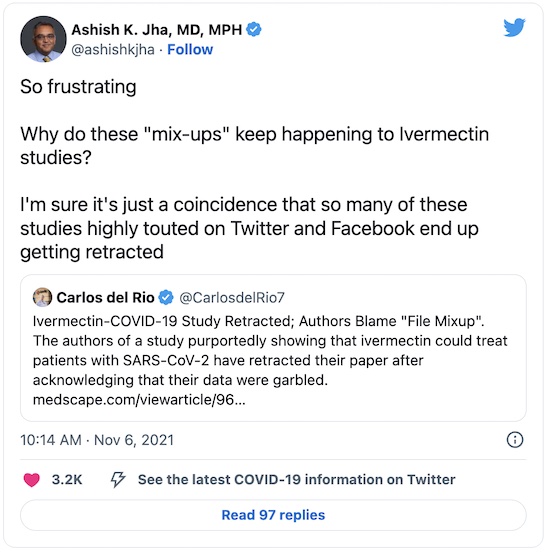 Yes, that is an excellent question. Ivermectin, and before it hydroxychloroquine, were the “miracle medications” that the Trumpsters swore up and down were a safe, easy, and cheap cure for COVID-19. People believed that, and then they died.

Now, ivermectin and hydroxychloroquine are perfectly reasonable drugs – in the applications for which they are known to work. Those applications are invertebrate parasite infestations and malaria, respectively. Neither of them has anything to do with COVID-19.

So why are the studies of real COVID-19 therapies like vaccines and molnupiravir so ethically squeaky clean, whereas the Republican-amplifed crap around ivermectin and hydroxychloroquine is medically useless and scientifically corrupt? Today came news from Retraction Watch that the study they all cite about ivermectin has been retracted. [1]

Fishy as hell. Nobody should believe a single word of what they say, even if they resubmit a “corrected” article, until some other research group independently confirms the result. Their credibility is pretty much trash now.

This is why you don’t take medical advice from right-wing political actors. Ever.

Lesson 2: Vaccines in Greece and how doctors respond

(NB: See the update below; the source material is at least conflicting, so this story is doubtful. I mean, it’s still a cool story, but it’s also possibly just a story.)

From Greece comes word of an interesting moral quandry: 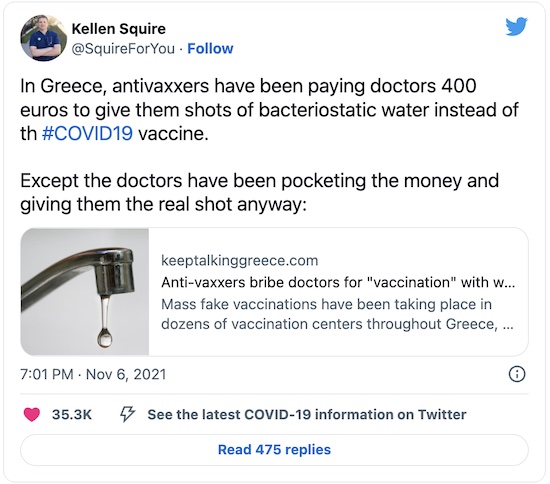 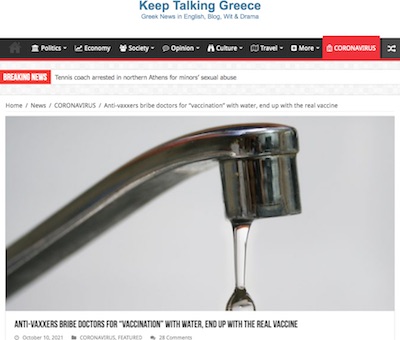 Apparently vaccine defiance has reached a fever pitch in Greece: instead of taking a free, safe, and effective vaccine people are sometimes attempting to bribe a doctor to ‘vaccinate’ them with water. [2]

Now, I’ve worked with several Greek reserach scientists and doctors. They were, to a fault, extremely competent, reliable, and funny. I really liked them. But this news… I just don’t know what to think:

The last course avoids cops in the clinic, doesn’t damage public health, and only causes legal exposure to somebody attempting to sue them for not honoring illegal bribery. So apparently that’s the way out: take the bribe, and vax ‘em anyway. In some ways, everybody gets what they deserve: a small bonus for the medical folk, and a vaccine for the deluded patient. It’s just… lacking in consent that bugs me.

I just don’t know how to feel about this. I both want to laugh and cry, simultaneously.

I honestly don’t know what I would do in that situation. What would you do?

Lesson 3: The example of Japan says we could have done much better

Instead of responding constructively to COVID-19, some of us engage in mask resistance, vaccine defiance, corrupt studies & conspiracy thinking around ivermectin, and a general pretense that this isn’t a big deal (at least not for right-wing manly men): 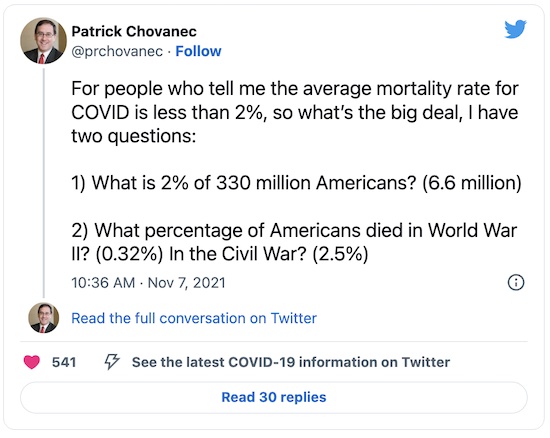 I remind you that the American Civil War was also fought because the conservative, racist, and more or less fascist American South wanted a culture war to resist moral change (in that case, so they could remain slavers). 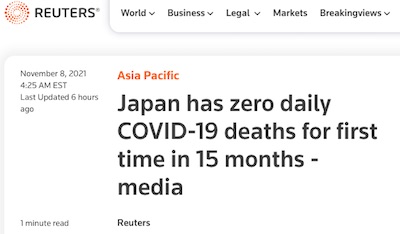 That means the US/Japan risk ratio says we in the US have almost 16 times more risk than Japan:

TBD: And yeah, I oughta calculate 95% confidence limits on that, using the fancy new beta ratio stuff that I’ve been working on, right? But for now, let’s do the usual crude binomial confidence interval we’ve been using as a stopgap measure until I get my brain in gear on numerics of ${}_{3}F_{2}()$ in the large parameter regime:

Compared to the US, Japan is doing fantastic! Everybody wears a mask, because that’s customary when you have even a cold, to prevent spreading it to others. And their vax uptake was initially slow because of silly bureaucratic reasons, but after that it sped right up. 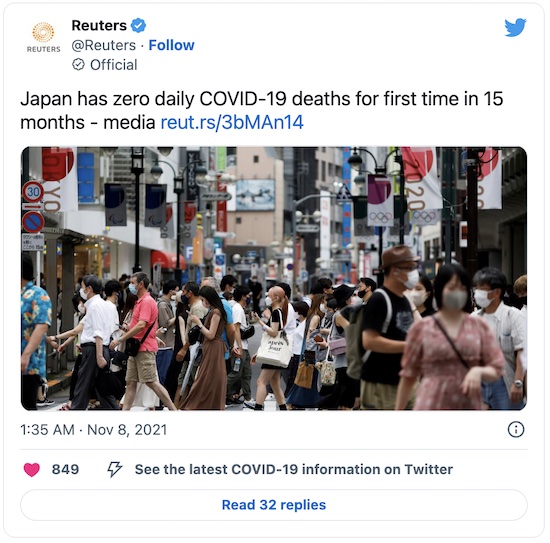 A former Greek colleague – by which I mean he’s still Greek; but now that I’ve retired, he’s a former colleague – emailed to say the story was funny, in both the humor sense and the “how can that possibly be true?” sense:

Having thought a little about this, I wonder (i) how general this sort of behavior can be, if true at all, and (ii) how strongly it correlates with Greekness.

If you ever bribe someone for any service, you don’t normally go around telling people you did so. If you accept a bribe, you don’t normally tell this to anyone. The supposed journalist who wrote the news, must have been contacted by several doctors who were telling the same story, i.e., that they accepted money from patients, and must have confirmed their story by finding the patients admitting their bribery attempt. Doctors are not supposed to tell journalists who their patients are and what they are consulting for. The account sounds anecdotal.

So it should have been difficult for a reporter to have gotten several doctors to tell similar stories, and next to impossible to confirm with patients.

I’ve forgotten my original source, but it led me to the source I cited below, the blog Keep Talking Greece: “Greek News in English, Blog, Wit & Drama”. Their About Us page says they started in 2010 to tell people about the lives of real Greek people, as an antidote to all the crazy stories being told about Greece in the financial crisis. If anything, that sounds like a claim for pro-Greek, rather than anti-Greek propaganda. Sounds fine, if true. But somewhat suspiciously, none of their articles are attributed to an author. So that’s at least a little peculiar.

When I dig through their article in detail, they cite 3 sources:

Seeing all that back-and-forth, it’s now time for me to invoke Scott’s Razor: I admit that the situation is sufficiently complex compared to my ignorance that I’m no longer comfortable having an opinion. Unless somebody has further information about this story, I’m going to just admit I don’t know if it’s true.

Later: My Greek friend offered a few more details: the newspaper To Vima tis Kyriakis translates to something like The Sunday Tribune. Back in the 1970s, it was a well-respected, trustworthy, centrist newspaper on a par with other European papers such as Le Monde, El Pais, The Guardian, and so on. But now, apparently, it is politically aligned with the PASOK party.

It’s apparently possible the government deliberately planted the story to discourage this sort of bribery attempt. (The current vaccination rate in Greece is around 60%, so the concern is at least understandable, though planting a story is not.)