US pauses JnJ vaccine on thromboses

Today the US regulatory agencies “paused” the use of the JnJ COVID-19 vaccine to investigate thromboses, similar to what’s been seen with the AZ/OX vaccine. How many, how bad, and what will a pause do?

What’s the sitch in general?

We’ve been following closely the situation in Europe, where the AstraZeneca/Oxford vaccine has been scrutinzed for clotting disorders, specifically cerebreal sinus vein thromboses:

It still looked in the case of AZ/OX like the risks of not vaccinating the general population were far higher than the risks of thromboses, so vaccination should continue. But once there was a particular population identified (younger women) whose risk of dying from COVID was less than their risk of dying from thromboses, stopping was the right thing to do. So now the European authorities recommend AZ/OX for older patients with an age threshold depending on the country.

What happened to the JnJ vaccine today in the US? 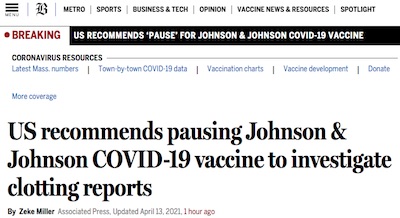 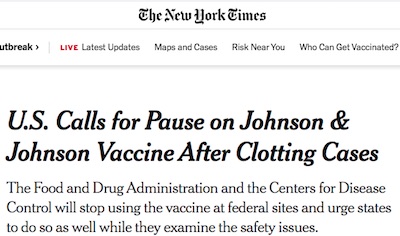 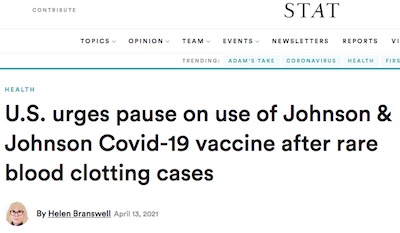 It’s all over the popular media; I used reports from the venerable Globe [1] and the New York Times [2]. For somewhat higher technical accuracy and less of a miserable focus on “story”, we turn to the reliable Helen Branswell at STAT News [3] and the press release from the CDC’s director of CBER himself, Peter Marks [4].

Synthesizing the reports from these 4 articles, with of course more emphasis on the last 2, the situation is pretty clear:

Ok, so how serious is that risk of a probability rate of thromboses of $8.82 \times 10^{-7}$ per fortnight? Let’s compare with other risks to see if this is something to worry about, or do you have a greater chance of being run over by a car on your way to your vaccine appointment? 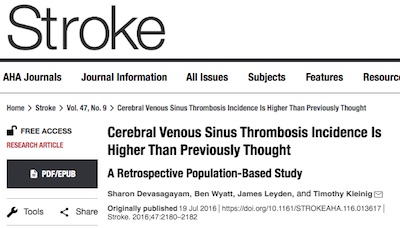 It looks like the risks are in favor of using the JnJ vaccines. Comparing the rate of events in the 2 weeks post vaccination:

So overall, the risk of CSVT from the JnJ vaccine looks less than the risks of other reasonable behaviors, and no worse than the general risk of CSVT anyway.

However: Those are the risks to the general population; if the identification of younger women as a higher risk group for CSVT holds up (see ACIP meeting tomorrow!) then it makes sense to pause briefly and put in place 2 things:

The pause needs to be brief, because every day we force people to go unvaccinated, they’re exposed to risk of death or disability from COVID-19, and that risk is 100x the risk of CSVT from the JnJ vaccine.

We can’t tell if that’s exactly what’s happening now, but it does appear to be. Or so one may hope.

TBD: I really should add 95% confidence limits on the above probabilities, given how often I’ve whined at other people for not doing so! The 100x differences in probability are likely to be significant, but it’s always good to be explicit about that.

The formidable med-chem blogger, Derek Lowe, whose blog In the Pipeline is hosted at Science Translational Medicine, weighed in today with a short Q&A on the JnJ clot situation. [8] We seem to be pretty much on the same page.

The ACIP committee is meeting right now. I’m too burned out on COVID to liveblog it.

The options the ACIP could choose amongst are:

The ACIP has voted to continue the “pause” for another 7-10 days, while more data is gathered. That’s… less than ideal, but it’s what’s there. I hope they’ll be able to look through more data, conclude option 2 is the way to go, and resume vaccinations. It won’t make a lot of difference in the US, but it will make a lot of difference elsewhere, where JnJ or AZ/OX or “nothing” are the available options.

And as science journalist Kai Kupferschmidt points out, a lot of the risk assessments we did above depend on the denominator. Are we talking about population risk for all ~7 million JnJ vaccinees, or just the ~700k women age 18-50 vaccinated in the last 2 weeks? That changes the population by a factor of 10, and thus bumps up the thrombosis probability by 10x. The conclusion that the risk of CSVT is still less than the risk of COVID death is still approximately true, I think — but it makes the halt to examine subpopulations slightly more understandable. 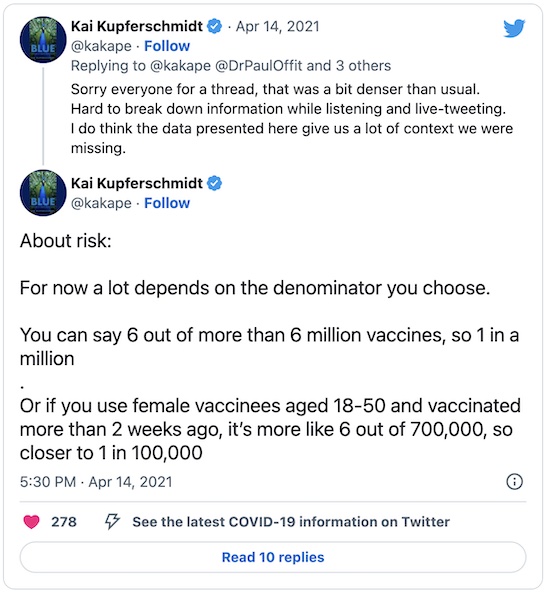