Today the Advisory Committee on Immunization Practices (ACIP) today recommended restoring use of the JnJ COVID-19 vaccine with warnings, and thrombosis treatment guidelines for clinicians. The CDC & FDA agreed, and lifted the restrictions. This seems to be very much the correct conclusion, albeit one arrived at far too slowly. 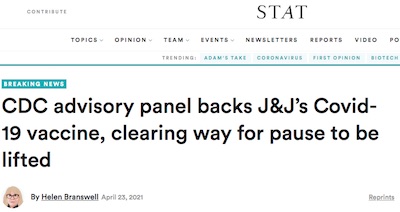 Today the full ACIP met, in a day-long series of talks presenting the risks and benefits of the JnJ vaccine, and the reasonable policy choices that could be made. Helen Branswell of STAT News comes through again with a pretty good summary piece: [1]

This is our updated baseline rate of CVSTs within 2 weeks of getting JnJ, assuming all of them are associated with the vaccine. As we discussed before, this is notably less than numerous other risks, all extremely relevant to a vaccine-eligible person (with the notable exception of CVST from other non-vaccine causes):

Conclusion: Even if all these terrible CVST with thrombocytopenia cases are attributed to the JnJ vaccine, you’re still saving lives compared to the other risks patients face, especially COVID-19 itself. So resuming its use seems eminently sensible.

A quick trawl through the slides presented to the ACIP

The ACIP put all the slides used in the discussion up for public view, along with a video feed of the meeting. [2] 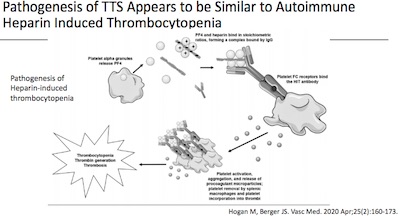 Some characteristics of the people who had the thromboses: 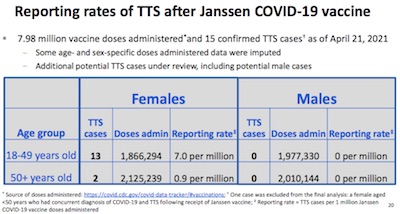 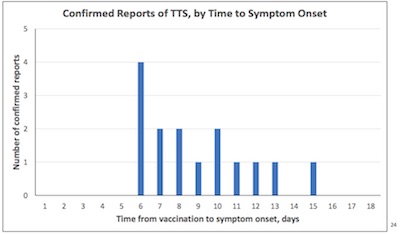 The reporting rates broken down by age and sex really point the finger toward young women being the at-risk group here. The symptoms also seem to come on within 6-15 days, so the monitoring period is fairly short.

The speaker from JnJ did some similar risk comparisons to the ones we did above. The risk of TTS after their vaccine is about 1.9/million, using their numbers. The mRNA vaccines have about 1.2/million chance of anaphylaxis, the H1N1 flu vaccine might cause Guillan-Barré syndrom about 3.4/million, and so on. So the risks are already something that we find accceptable in other, similar medical situations. They even did the comparison with birth control pills that we did above! (No, I don’t think they read this crummy little blog, but it would be funny if they did.) 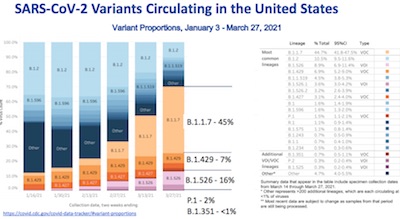 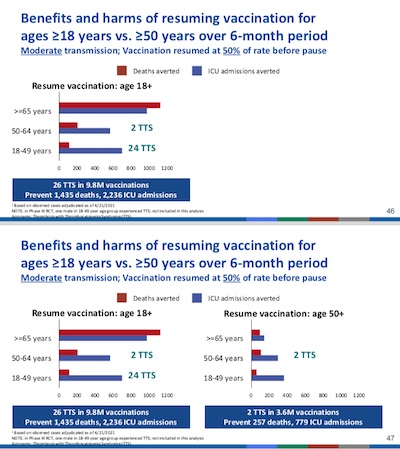 The last speaker, Sara Oliver, had the best presentation (well worth your time). They went on for a bit about their “Evidence to Recommendations framework”, which apparently is a semi-formal method for making policy recommendations based on the evidence of adverse events. Seems like a good thing to have, given that we want to minimize overall risk from both thromboses and from COVID-19 itself.

One risk for the US is that the variants from around the world are starting to show up in the US. This is a consequence that will keep coming back, until we get pretty much the entire world’s population vaccinated and suppress SARS-CoV-2. A similar thing happened in South Africa: within 8 weeks of its initial appearance, B.1.351 became almost the only variant seen!

They looked at case rates, hospitalization rates, and mortality rates broken down by age, sex and race. So it looks like they fairly thoroughly assessed the risks of not getting vaccinated along with the risks of TTS, which is the proper thing to have done.

They used a compartmental model (presumably a modified SIR model) with strata for ages, essential workers, underlying conditions. It was fitted to data through the present. The various scenarios in the models told them the time to complete vaccination in the US, depending on which vaccines are available and are administered at which rates (74 - 88 days).

Generally speaking, these are just mathematical ways of trading off the risks (number of vaccine-related TTS cases) vs benefits (prevention of COVID-19 cases, hospitalizations, and deaths). Though they regrettably didn’t show any beautiful equations, I like the thoroughness and clarity of the risk/benefit modeling.

They also commendably addressed equity, noting that many hard-to-reach groups are really only reachable with a single-shot vaccine and that JnJ is really our only option there.

This presentation really reassured me that the risk/benefit assessment was well done. 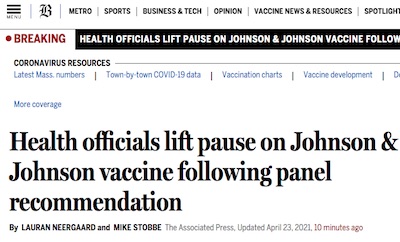 The FDA and the CDC are jointly responsible for the pause. They don’t have to listen to the ACIP recommendations, but they usually do. Not to do so here would be egregiously bad.

So we were gratified to read in the venerable Globe [3] that later in the evening the regulatory agencies did just that, ending the 11 day pause. Women 18-49 are now to be advised of the thrombosis risk, and told to go to an ER if they have them. Emergency medicine folk have been told not to use heparin for thromboses if the patient has recently been vaccinated, or has a low platelet count. (I would have gone for vectoring women 18-49 to an mRNA vaccine, but this one is still probably a very good strategy.)

So that all looks pretty good. Now if only JnJ can get their manufacturing act straightened out… [4] because as Abba Eban remarked on another subject, we “never miss an opportunity to miss an opportunity” to do things right with COVID-19 vaccines. (Though that’s good snark, it’s slightly too pessimistic here. We did amazingly well at making vaccines with unheard-of-efficacy at record speed, in spite of the US lacking a functional federal government at the time, so it was an international effort. The distribution, though, has been more problematic.)

This seems like more or less the correct decision: the vaccine benefits outweigh the risks, so we save more lives by using it. Adding a warning for women 18-49 about symptoms of thrombosis is entirely appropriate, or even steering them to an mRNA vaccine, if available. Warning clinicians not to use heparin, the therapy of choice for thrombosis, if the patient was recently JnJ vaccinated or shows thrombocytopenia, will save more lives as well.

The bug in the salad here, though, was speed: it took way to long to reach this conclusion. One could have looked at the frequency of thromboses last week and concluded more or less the same thing, adding the instructions about heparin as they were discovered. We lost a week of potential vaccinations, and stimulated still more supertitious fear among the ignorant.

Self inflicted wounds are the slowest to heal.

2: J Romero, A Cohn, B Bell, M Streiff, T Shimabukuro, G Lee, & S Oliver, “ACIP Presentation Slides: April 23, 2021 Meeting”, Advisory Committee on Immunization Practices, 2021-Apr-23. The meeting agenda is here. There was also a video livestream here, but it seems to be gone as of the evening of the 23rd. They tend to show up eventually on the CDC’s YouTube channel, though.↩