The Highest-Vaccination Ethnic Group in the US, Redux

Remember last year when we noted the highest-vaccination ethnic group in the US? They’re still winning, and it shows in the statistics.

Remember last July, when we noted with approval that the highest-vaccination ethnic group in the US was Native Americans, and how they did so in sensible culturally attuned ways, and how they were generous with vaccines to their neighbors and friends? [1]

(Yeah, I know you probably don’t remember. It’s ok: we’ve all had other things to think about since then.)

Via Eric Topol and the Associated Press comes word that they’re still winners: 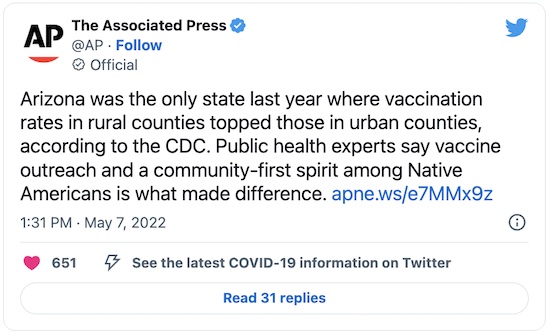 He refers us to an article by Terry Tang at AP News. [2] Very interestingly, the article points out that not only was there abundant community spirit to encourage vaccinations, but that it was done in alliance between Navajo and Hopi peoples together. They have not always had frictionless relations in the past, so it’s just beautiful to see that kind of solidarity.

They pushed for vaccination as “an act of selflessness” and cultural preservation, in which all community members protect each other. Combine that with consistent, easily understood leadership communications (sometimes in native languages) and you’ve got a working strategy. 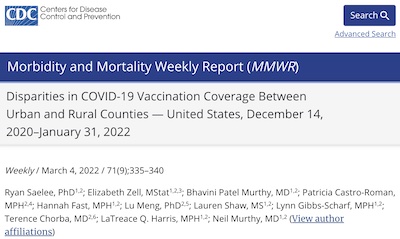 Arizona is, as a result, the only US state where rural vaccinations outpaced urban. At least partial vaccination rates 2020-Dec-14 through 2022-Jan-31 were 86.1% in rural counties vs 69.3% in urban counties in Arizona. For comparison, the US national figures are the other way ‘round: 58.5% rural vs 75.4% urban according to the CDC’s MMWR. [3]

Now we can ask 4 questions:

So the following effects are real:

One more bit of weirditude

Another oddity: Santa Cruz county, which is rural but has little Native American population, had a vaccination rate of 146%! This is because it borders Mexico, and lots of Mexicans, sensible folk that they are, crossed the border to get vaccinated but were not counted as part of population.

It’s through this kind of weird junk that you know the data are real.

Interestingly, you can see the US national urban/rural divide in Charles Gaba’s data on vaccination and Trump voting at the county level. [8] Last February, we wrote about his result as Reason #4 to be pessimistic:

The obvious point is the blue-vs-red slope, indicating Republican vaccine refusal. But more to the point today, consider the radius of each of the circles: it’s proportional to the county population.

That’s the national flow, and it’s stupid. The Arizona Navajo and Hopi tribes swam upstream against that flow, and they’re brilliant.

We should learn from the practical community spirit of our Native American brothers and sisters. It’s not only the right thing to do, it just plain makes practical sense.

1: Weekend Editor, “The Highest-Vaccination Ethnic Group in the US”, Some Weekend Reading blog, 2021-Jul-16.↩