The Highest-Vaccination Ethnic Group in the US

What ethnic group in the US do you think has the highest vaccination rate? 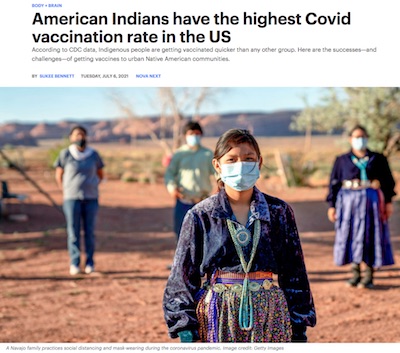 According to an article from PBS/NOVA [1], Native Americans had 3.5x the infection rate and 4x the hospitalization rate of white Americans, they nonetheless responded heroically with an enormous vaccination effort for their members, and frankly for anybody who happened to be standing nearby. This is both responsible to tribal citizens and generous to those tribal non-citizens who are affiliated with them or work with them.

Note that the Native American vaccination rate is higher than the average rate in 28 states, including the states with high Native American populations. Basically, they’re just ahead of the pack, and that’s a good thing for them.

There were, of course, problems:

A Sense of Generosity and Plenty

Most interestingly to me was the near-universal decision across tribes to share vaccine doses with those who lived with, worked with, or were otherwise affiliated with tribal citizens. In the rest of the world, people got pretty nasty about pushing to the front of the line, while Native Americans expanded the circle of their people to include their neighbors.

And that, ladies and gentlemen… is how it is done.