Yesterday came simultaneous bits of evidence in the US that (a) COVID-19 death rates for unvaccinated are unambiguously disastrous, and (b) Republicans attempted to defund any school that takes COVID-19 protections. This is ‘death cult’ levels of badness.

Yesterday Eric Topol pointed to a result from the CDC’s data tracker on COVID-19 death rates by vax status [1]: 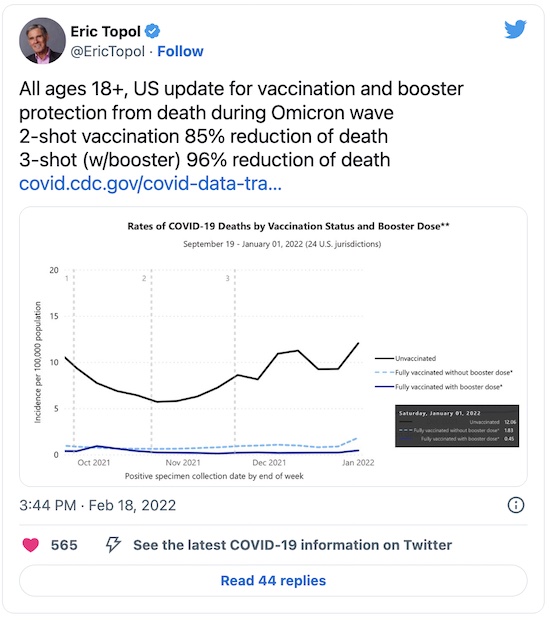 Now, in case that’s too small to read on your screen:

The blunt-trauma-obvious conclusion is that death rates among the unvaccinated are dramatically larger. If you read the fine print in the legend in the lower left, you can pretty quickly find the actual numbers of deaths per 100,000 for vaxed & boosted vs unvaxxed:

That is, if you’re unvaccinated, you’re at almost 27 times the death risk of the vaxed and boosted.

True, you can tease out some subtleties by stratifying by age, obesity status, and other risk factors. (We’ve even done that here before on this crummy little blog that nobody reads.) But you can’t eliminate a 27-fold increase in risk with subtleties!

Conclusion: Get vaccinated and boosted, use masks, social distance and you’ll probably live through this. Don’t do that, and your chances of dying go up double digits.

You might think that this sort of thing would cause a unified push to vaccinate and save the lives of people. Not so, as reported 2 days ago by CSPAN Capitol Hill reporter Craig Caplan: 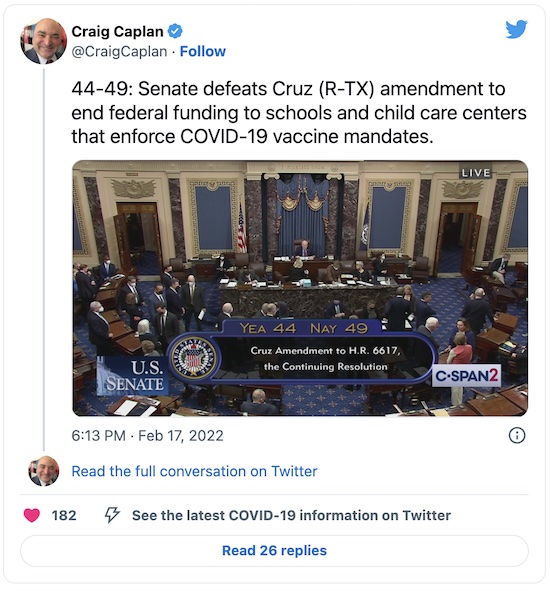 Note that voting for this proposal was nearly unanimous among Republicans, with the exceptions of Blunt and Collins (and, apparently, a couple others who judiciously chose to be out of town).

Now, sure, it’s Ted Cruz. It’s a well-known axiom that he’s disliked even by his own side. Al Franken (then senator, D-MI) is supposed to have said of Cruz:

Here’s the thing you have to understand about Ted Cruz: I like Ted Cruz more than most of my other colleagues like Ted Cruz. And I hate Ted Cruz.

If this had been proposed by another Republican senator slightly less disliked, and you know there are 49 other Republican senators each crazy enough to try, then this might have passed. (Probably to be blocked in the House or by the President, but still: it’s a statement of intent from the right. They want political points, and are willing to accept deaths in order to get them. This is the bargain of Moloch, the ultimate coordination problem.)

Look, I grew up in a family that had been Republican since the time there were Republicans. But about the time or Reagan, Republicans gradually got crazy, and I got out. Now the crazy isn’t so gradual any more.

Conclusion: Once you figure out you’re in a death cult, the correct next move is to get out.

There’s more after that, but start by getting out of the Republican party.