Remember last month, when we had the story about people in Greece bribing doctors for fake vaccines, and doctors taking the money but giving real vaccines? Even though that story has some believability challenges, it’s no longer the weirdest vaccine story I’ve heard. Move over, Greece: the Italians are on the job. (And where are the French surrealists, anyway?) 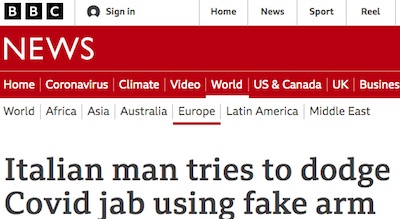 People have tried all sorts of ways to avoid being vaccinated: outright refusal, fake vax cards, bribes, … all sorts of things. But from Italy via the venerable Beeb [1] comes a story that shows what happens when people who take surrealism seriously show up:

The obvious solution? Spend almost 500 euro on a silicone male chest half-body suit, and hope the vaccine will go into the rubber, not his flesh. Obviously.

Also obviously, the nurse administering the shot was not having any, and reported him to the police. 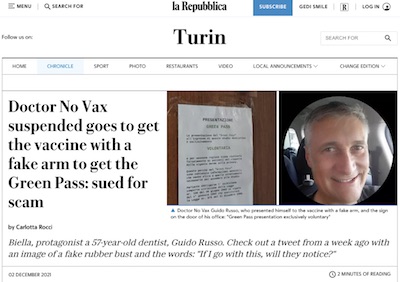 We chased down the original source for this very important news, to an article by Carlotta Rocci in la Repubblica. [2] We show it here under Google Translate, since at Chez Weekend we do some Latin, but precious little Italian. (Ok: a bit of nel mezzo del cammin di nostra vita and maybe some ogni speranza laciate, voich’entrate, but after that it’s restaurant menus all the way down.)

It just gets weirder and weirder. The comedian in this case is a dentist named Guido Russo, who styles himself “Doctor No Vax”. On his office door, shown here, is a sign advising potential patients that the “Green Pass” (vaccine proof) is “strictly voluntary”. (The Italian government may have a somewhat orthogonal opinion on this.) He is apparently suspended due to a refusal to vaccinate.

There’s some possibility that he even posted his plans on Twitter under a pseudonym (apparently in Cyrillic, because it just has to get weirder). The picture of the silicone male torso is… disorienting.

There are other articles linked, e.g., that Russo continued to work as a dentist in spite of a suspension. I think I’ll decline the invitation to dive down any further rabbit holes here. The level of cognitive hazard is pretty high as it stands.

Wouldn’t it just be easier to get vaccinated? And then, you know, not have to worry about COVID-19?